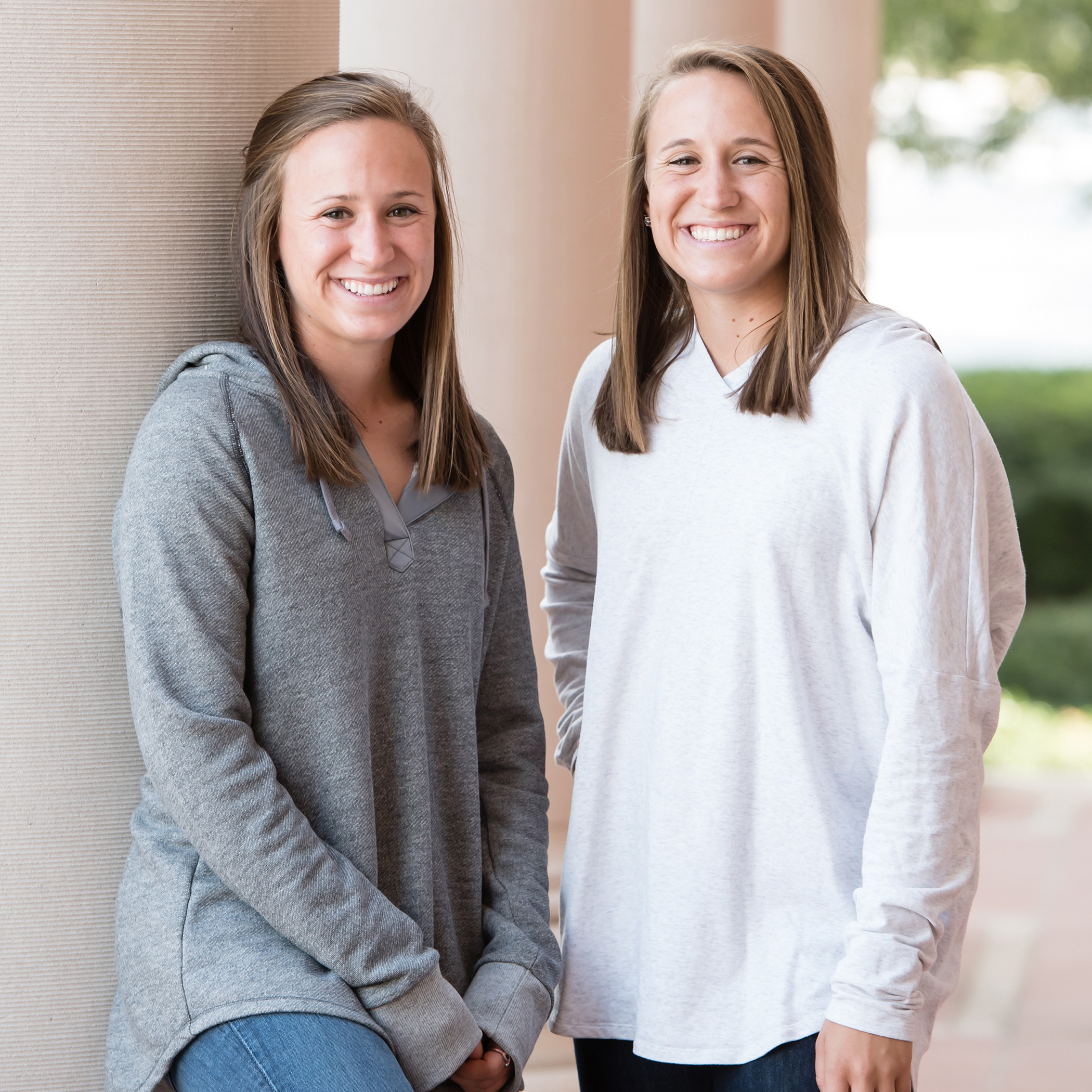 Fraternal twins Emily and Gabby Byorth fell in love at the same time. From the moment they stepped on the pitch, they knew they had found something they truly enjoyed. In sisterly fashion, when asked if it was love at first kick, they replied in unison.

“I think so,” they said, looking at each other before they burst out laughing.

“We played for a rec team when we were three or four,” said Gabby.

Emily was quick to chime in, making sure the glory of their youth soccer days was not lost.

“We dominated…well, our whole team did. Gabby and I were only pretty good at that age.”

“It’s pretty funny, because all we did was run around,” stated Gabby. “We didn’t know what we were doing. But I know we really enjoyed it.

“We played rec until we were eight or nine years old, and then started playing travel at the club.”

While playing with their travel teams through high school, the Dublin, Ohio natives also enjoyed playing basketball through their first few years of high school. However, when their sophomore year rolled around, they decided to turn their energy towards the recruiting process.

“We wanted to focus on soccer,” said Emily. “We also had the opportunity to go to some camps that would interfere with basketball, so we made the decision to stop.”

The Byorths knew they had a shot at getting recruited for soccer, so they used the recruiting camps to their advantage. Their hard work paid off when letters started landing in their mailbox.

“We already knew about the University of South Carolina, so when we got the letters from those coaches, we saw we also got one from Clemson,” stated Gabby.

“Our parents said, ‘Well, we are going to visit USC, so let’s just stop and visit Clemson on the way.’ We fell in love with Clemson the moment we stepped on campus.”

“Everyone talks about the Clemson family, but it really is true,” added Emily. “You come here and you feel at home, even though you are thousands of miles away.”

Though they ended up together, the girls said that they wouldn’t have minded going to college on their own if it meant they both went to their dream school.

“We always said that if we liked different schools, we would be able to go our separate ways, and I think it would have been fine,” admitted Gabby.

“But we are pretty similar in what we like, and so I think it worked out better for us to be together. This way, our parents can come to all the games they want and we always have somebody.

Emily and Gabby’s parents travel an upwards of eight hours as many weekends as they can to catch the twins in action.

“It helps us that we have each other every day,” stated Emily. “Our parents come to a lot of our games, so we love the fall, because we see them every weekend. We are a really close family.”

Their parents have six children, creating an environment of controlled chaos when they are all home together.

“We have six kids in our family, and thankfully, we all get along really well,” said Gabby. “Especially now that we are older, we like to poke fun at our parents. They love it when we are all home.”

“It is a lot of fun being together with everyone,” added Emily.

Poking fun at their parents is not the only thing all of the siblings have in common.

“We have a pretty athletic family,” remarked Emily. “My brothers played football, basketball, baseball and tennis. Our little brother is playing soccer. Our sister is also a soccer player, and she played club lacrosse in college. Both of our parents played sports in college as well.”

Their sporty upbringing gave both girls a deep appreciation for athletics and all that they entail. Both health science majors, Emily and Gabby already have a plan for when their soccer careers come to an end.

“We both want to go on to do physical therapy and get our doctorate,” said Emily.

“I think we’d like to stay around sports though, because that’s what we know best and we like to be around other athletes,” added Gabby.

Helping others is in the twins’ nature, as both girls are avid volunteers who love giving back to their community.

“We both really like volunteering,” noted Gabby. “Even though we don’t have a lot of time to do it, we both enjoy getting out there and making a difference, especially with kids.”

Through their time at Clemson, Emily and Gabby have learned how to reach out and be able to communicate more effectively. Self-described “quiet kids,” they both had to find their own way out of their shells.

“I just wanted to do what I had to do and make sure I did everything I could to be a part of the team and keep my grades up,” said Gabby. “But as we got closer as a team, Emily and I realized we could play a bigger part and be ourselves.”

Emily jumped in to add that their leadership roles helped them find their voices. This year, the twins are two of the four team captains.

“We have learned a lot through our leadership roles,” stated Emily. “I have had to learn to say what I want to say and not overthink it. I learned you don’t have to be talking all the time to lead, because I think I lead more by example.

“Before we came to Clemson, we hadn’t had much to push through or persevere through, but here we have had to go through some adversity.”

When asked about being named captains together, the girls traded compliments, saying they knew the other would be named a captain because of how much she deserved it.

“It is pretty cool to be able to do it together,” interjected Gabby.

In their final year on the pitch, Emily and Gabby have a lot planned for their team.

“I would love to have a couple of championships under our belt when we go,” said Gabby. “One of our biggest goals is to return back to the ACC championship and win it, which I think we are more than capable of doing.”

“We’ve been through a lot this season and faced a bunch of great teams,” added Emily. “I think we have shown we can fight through a lot, because we’ve been down goals and come back to win or tie. I think that will be good for us during the knock-out stages.”

As for what sets them apart on the pitch?

“Emily is more attacking-minded than I am.” admitted Gabby while smiling at her sister. “I have to work a little bit more on that.”

Not to be outdone, Emily threw in her own compliment.

“Gabby is a better one-on-one defender than I am.”

What they do agree on, however, is what they will miss when they walk off of the pitch for the last time.

“The people…all of our teammates…we made our second family here, and it will be weird not to see them every day,” said Emily.

“Our team has been through a lot together over the last four years,” added Gabby. “We are a tight-knit group, and I am going to miss them a lot…the environment, too.

“It’s competitive, it’s fun and that brings out the best in us…just knowing you have people that will always have your back. I’m going to miss that feeling.”