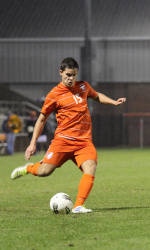 Benediktsson was the Tigers’ leading scorer with seven goals and five assists for 19 points. He was named to the All-ACC Freshman team this past season. He is the first freshman to lead the Tigers in scoring since Jimmy Glenn in 1990.

The Hafnarfjordur, Iceland native was named the National Soccer Coaches Association of America (NSCAA) National Player-of-the-Week on Monday, October 31, as the Tigers upset number-one ranked Maryland on October 28. He was also named ACC Player-of-the-Week for his performance against Maryland as well.

Benediktsson scored the Tigers’ first goal and assisted on the game-winner with 5:35 remaining in the match as Clemson prevailed in the ACC contest despite playing a man down for the final 67 minutes and 31 seconds following a red card. He was the only freshman to win this NCSAA honor last season.

The Tigers were 8-8-2 this past season and finished with a 4-4 mark in ACC play. Clemson defeated #14 Boston College and #1 Maryland this season, and tied #24 Duke in Durham, NC in the ACC Tournament in 2011.