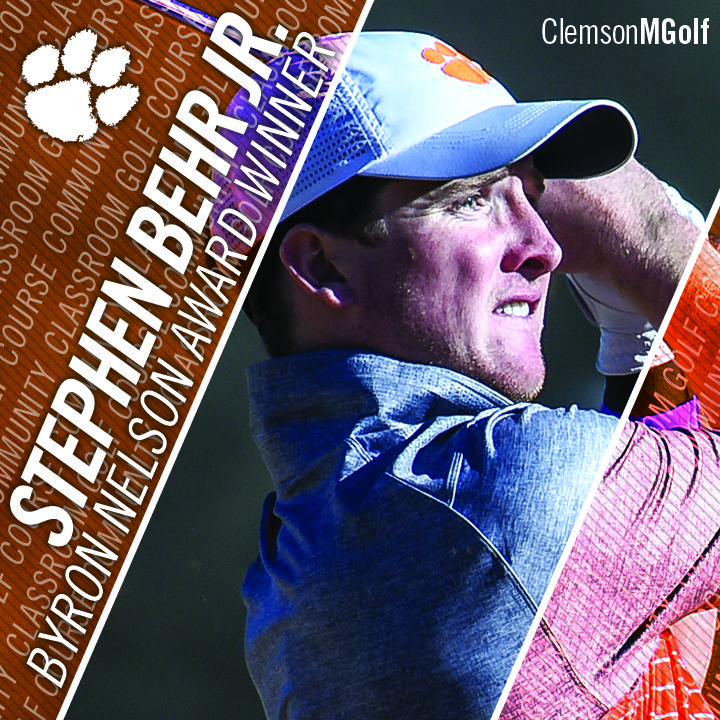 Clemson, S.C.—Clemson golfer Stephen Behr is the recipient of the 2016 Byron Nelson Award.  The announcement was made on the Golf Channel on Wednesday morning.   The honor is presented each year to the graduating senior who excels not only on the course, but in the classroom and in the community.  Behr is the first Clemson golfer to win the award, which dates to 2002.

The award is presented each year by Golf Coaches Association of America and is named in honor of Byron Nelson, the respected Hall of Fame Golfer who won a record 18 tournaments in 1945, including 11 in a row.

Behr, who celebrate his 23rd birthday today, leads the Clemson team into the ACC Tournament this weekend with a 71.88 stroke average.  He also leads the team in top 10 finishes with four and is tied for the lead in rounds in the 60s with six and under-par rounds with 10.    He is currently ranked 27th nationally in the Golfweek/Sagarin rankings, a big reason Clemson is ranked 10th in the nation as a team.

“This award is one of the biggest and best in college golf,” said Behr, who graduated with a 3.91 GPA last May and continues to play for the Tigers this year as a graduate student.  “To me it is the most prestigious because the collegiate golfer who wins it must have the entire package, excelling in all areas that make being a student-athlete a challenge;  playing well in competition, staying competitive in the classroom, and carrying oneself with honesty, integrity and respect.”

For his career, Behr is a four-year starter with a 72.48 stroke average, seventh best in Clemson history.  He has led Clemson in stroke average three of his four years, has four top 10 finishes and 50 career rounds at par or better.  The ACC Tournament will be his 43rd career event for Clemson.

Behr was honored by the Clemson Athletic Department earlier this month when he won the Solid Orange Male Athlete of the Year.  That award is presented each year at the CLEMMYs and is presented to the male who exemplifies a Clemson student-athlete through leadership, athletic performance, service, academics and sportsmanship.

Also involved in the Clemson community, Behr is an active participant in TigerPals, a Clemson Pen Pal project to communicate with local children. A member of Clemson’s Student-Athlete Advisory Committee, he participated as a leader in Clemson Can, a food drive to eliminate hunger in South Carolina. Through SAAC, he also was an integral part of Tiger Field Day and organized and helped conduct Operation Christmas Child. Behr was the event chair for the Welcome Back Festival, which had over 70 local Clemson vendors.