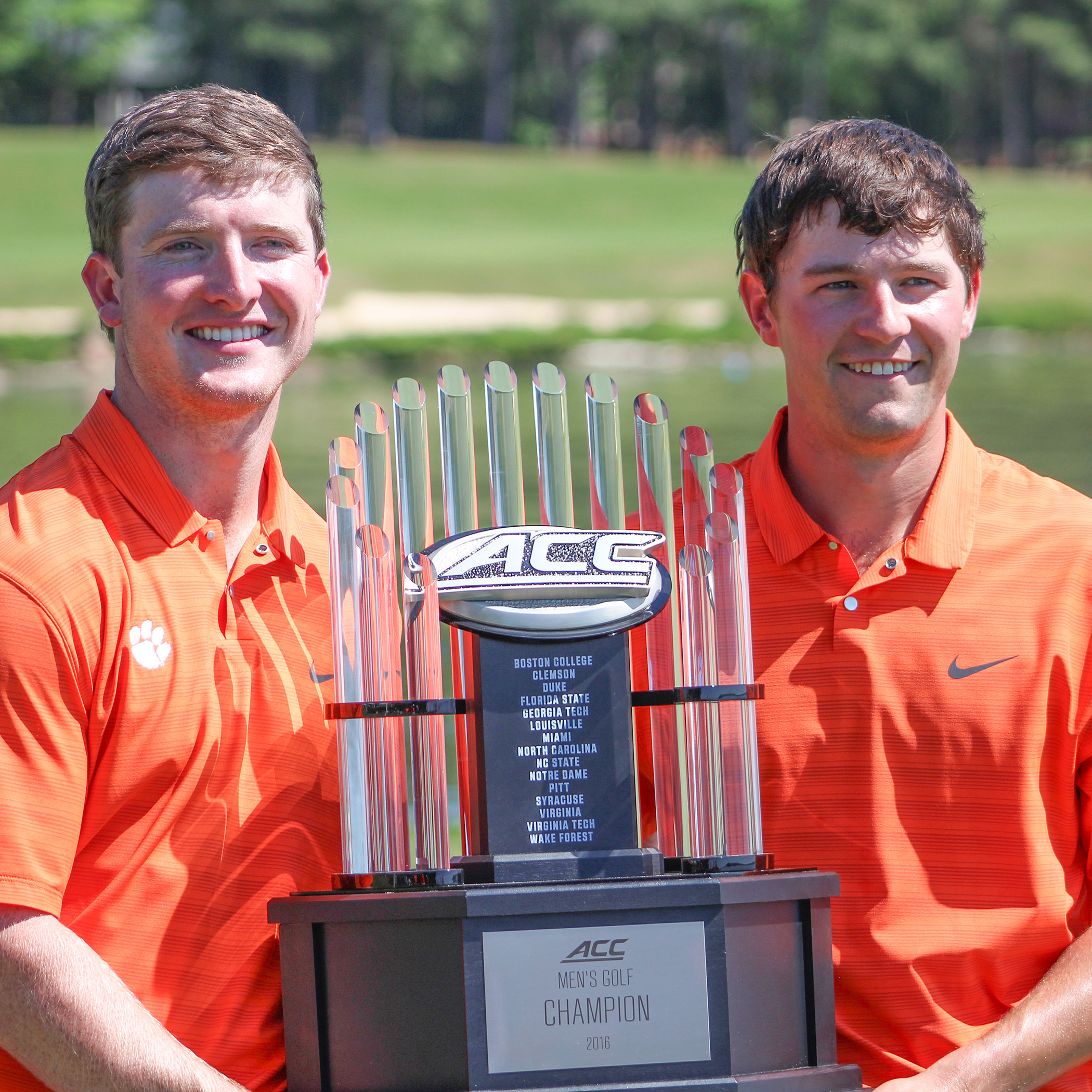 Over the last four years, the Clemson men’s golf program has made a steady rise in the national rankings. An NCAA Tournament team each year, the 2015 squad reached a playoff at the ACC Tournament with Georgia Tech, then qualified for the NCAA Tournament.

This year, Larry Penley’s Tigers have been ranked near the top 10 all season and won two tournaments. As you read this article, the Tigers are preparing for an NCAA regional and hopefully a run in the match-play portion that determines the national champion.

There have been two common denominators in the starting lineup for the Tigers the last four years, and they have had as much to do with the steady incline in the rankings as anyone.

Stephen Behr Jr., and Miller Capps have been mainstays of consistency and have shown steady progress that has led this team to the precipice of a great finish to 2016. Both are among the best in school history in a number of statistical areas, but both have also been model student-athletes and representatives of the program.

“Stephen Behr and Miller Capps are two guys who do things the right way,” said Penley. “I am sure going to miss them next year.

“Stephen has been such a good player for us. We haven’t had a lot of guys who have led the team in stroke average three of four years, but he has. He reminds me a lot of David May, who was so steady in everything he does.

“Miller has been the same way, someone you know is going to count every time out.

“Both players have been such great leaders and it has meant a lot to the younger guys. Knowing that you have two guys who are always going to count frees up the younger players.”

While this duo of Clemson leaders has a lot in common, they had considerably different routes to get here. Capps grew up in the shadow of Death Valley and Walker Course, while Behr never saw Clemson until he visited.

“I really didn’t have a connection to Clemson growing up,” admitted Behr. “My mom went to Auburn, my dad when to College of Charleston and my sister (five years older) went to South Carolina.

“I looked at Wake Forest, Auburn, Wofford, South Carolina and Clemson. My attitude was to go to a school where I would be the happiest if I never played on the golf team. I knew there would be a thin line from a competition standpoint at these schools as far as getting in the lineup. I didn’t want to go to a school, sit on the bench and have regrets.”

For Capps, it was a different story. While he lists a North Carolina (Denver) hometown on the roster, his formative years were spent in Seneca, S.C.

“Both my parents went to Clemson, so there was always orange around our house.

“When I was a kid, sometimes we played golf at the Walker Course while the football games were going on. We had the place to ourselves. We knew what was going on at the game because we could hear the roar of the crowd at the golf course.”

After the eighth grade, Capps’ father was transferred to North Carolina, so he played most of his high school career in the Tar Heel state. But when it came time to pick a school, Clemson was at the forefront.

“I wanted to go to Clemson, but it was getting late in July before my senior year and I hadn’t gotten an offer yet,” said Capps. “I was about 36 hours away from taking an offer to North Carolina. But then coach Penley called. I am glad I waited.”

Like Capps, Behr was also a relatively late commit.

“When I stepped on the Clemson campus the summer before my senior year of high school, I knew it was for me because of the small-town atmosphere and the people. It was the exact fit I was looking for. I remember when I was being recruited, they showed me the blue prints for the Penley Golf Building. They told me we would be in it when I was a freshman.”

Both players came to Clemson with the right attitude. They did not take anything for granted and did not expect to jump into the starting lineup. For Behr, and for Clemson golf fans of this year’s team, there was a pivotal day in February 2012.

“My freshman year, I had the lead entering the final round of qualifying for the first tournament of the spring in Puerto Rico. I played poorly and Thomas Bradshaw beat me for the last spot.”

Behr had not played in a tournament to that point, and when he did not qualify for the first tournament of the spring, Penley thought it would be a good idea to redshirt him.

“I was so down…I think I went back to my room and cried for two hours,” recalled Behr. “But it was the best thing for me because had I qualified for that tournament, I would not be on the team today.”

For Capps, it was a different story. He won the qualifying for his first tournament in the fall of 2013, the Carpet Classic.

“When I got here, I just wanted a chance to make the lineup. I got that chance in the first tournament and I have missed just one since.”

A look to the statistics shows their contributions have been incredibly similar. Entering the ACC Tournament, Behr was seventh in Clemson history in career stroke average (72.48), just above the 72.47 turned in by Clemson Ring of Honor member and All-American Jonathan Byrd had during his career. Behr is in the top 10 in school history in career birdies and counting scores in tournament play.

Capps had a 72.94 career stroke average entering the ACC Tournament, better than Clemson Ring of Honor and NCAA champion Charles Warren had (72.99) during his stellar career.

Both players have 10 career top-10 finishes. Entering the ACC Tournament, Capps had 51 rounds at par or better and Behr had 50. Behr’s career-best round is a 65, and Capps top performance is a 66.

While their results have been similar, their swings have not. Behr has a more traditional approach. Capps has one of the more unorthodox swings in the nation.

“Two years ago, we were playing in Puerto Rico and a friend of mine who plays for Florida came up to me and said, ‘who is that 15-handicapper on your team?’

“He was pointing to Miller and commenting on his swing. All Miller did that weekend was shoot 12-under and win co-medalist honors with Robby Shelton (Alabama), one of the best players in the nation.”

Capps does some unusual head movement at impact, leading to some strange-looking pictures. But it works for him.

“My swing is one that is comfortable for me. I haven’t had a lesson in many years. A lot of what I do has to do with baseball. It is what comes natural to me. It is a swing you wouldn’t teach to anyone.”

One thing these young men have in common is their approach to academics. Behr finished his undergraduate career with a GPA north of 3.9. He has been on the Academic All-ACC team every year he has been at Clemson and was named to the Golf Coaches Association Academic Scholars team last year.

This year, he won the Byron Nelson Award, a national honor that goes to a graduating senior who excels not only on the course, but in the classroom and the community. He also won the Solid Orange Male Athlete-of-the-Year award at the CLEMMYs, the department-wide awards program. That honor goes to the Clemson athlete who exemplifies the ideals of leadership, athletic performance service, academics and sportsmanship.

“The CLEMMYs award was very cool. I was pleasantly surprised because there were so many candidates. This was a meaningful award because of what it stands for and because it was an award for the entire department.”

Behr earned his undergraduate degree last year and is playing as a graduate student this year. He will continue to play golf, but this summer will begin employment in Atlanta working for Ernst & Young in the risk management consulting department.

Capps, who received his degree in May, is going to give golf a go as a professional, but has long-term plans.

“I am going to remain an amateur this summer, then turn pro in the fall. I want to see how far I can go with this. It has been such a big part of my life so far. But at some point, I will go to law school.”

It has been a great experience for both players at Clemson, and they know this is a relationship that will last for a long time.

“I have a lot of respect for Miller…he has been a great teammate,” stated Behr. “We have been together the last four years and probably roomed together for half of the tournaments. He is just a good teammate and a friend to everyone on the team. I am thankful he has been here with me.”

“Stephen is very business like in everything he does,” added Capps. “I really don’t know how he has done it with all the travel and some of the committees he is on. It tells you how driven he is. We were all proud of him when he won the award at the CLEMMYs. He deserved that.”

But before they depart Clemson, there is some unfinished business.

“They have already left a mark on this program in how they have represented us in every way,” said Penley. “I know they want to finish strong at the NCAA Tournament.”