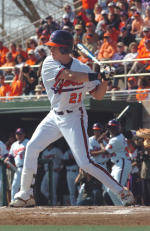 Clemson (7-2), ranked as high as #2 in the nation, will play host to William & Mary (5-7) on Wednesday at Doug Kingsmore Stadium. First pitch is scheduled for 4:00 PM. The game will be broadcast live on the radio by WCCP (104.9 FM) out of Clemson. Live stats will also be available at ClemsonTigers.com for the game.

The Series Clemson and William & Mary have met twice on the diamond, with the Tigers holding a 2-0 lead. The two faced each other six years ago to the day (of Wednesday’s game) on March 8, 2000 at Doug Kingsmore Stadium. The Tigers won that game 10-6. The two teams then met again on May 25, 2001 in the Clemson Regional. The Tigers were victorious 4-1 in the second meeting.

The Starting Pitchers William & Mary will start senior righthander Paul Knackstedt (0-0, 9.45 ERA) on the mound Wednesday. The Hummelstown, PA native has made five relief appearances for a total of 6.2 innings pitched. He has allowed eight hits and three walks with three strikeouts. Clemson will counter with sophomore righty David Kopp (0-0, 0.00 ERA) on the mound. The Margate, FL native made his only appearance this season at College of Charleston on Friday. He pitched 1.0 scoreless innings and allowed one hit in that contest.

The Tribe William & Mary, led by first-year Head Coach Frank Leoni, enters Tuesday’s game at South Carolina with a 5-7 overall record and 1-2 mark in the Colonial Athletic Association. George Mason took two of three games at William & Mary this past weekend. Ten of its 12 games have been played at home, while it is 1-1 on the road.

The Tribe is hitting .287 with a .403 on-base percentage thanks to 60 walks and 20 hit-by-pitches in 12 games. William & Mary has stolen 19 bases in 33 attempts, including five each by Greg Sexton and Jeff Lunardi.

The Tigers Clemson enters Wednesday’s game against William & Mary with a 7-2 overall record after a 2-1 weekend, which included a two-game split with #9 South Carolina in a home-and-home series. The Tigers are 6-1 at home as well. The team is hitting .277 with a .367 on-base percentage. Taylor Harbin is 8-for-14 (.571) in just four games, while Tyler Colvin is hitting .367 with four homers and eight RBIs, both team highs. Brad Chalk and Adrian Casanova each have four sacrifice bunts, while the team has 13 in all.

Polls Clemson dropped to #2 in the Baseball America poll on Monday after four weeks at #1 in that poll. Georgia Tech moved ahead of the Tigers in Baseball America’s poll, while the Yellow Jackets also occupy the #1 spot in the other two polls. The Tigers also fell to #3 in the Collegiate Baseball and stayed at #3 in the Sports Weekly poll.

The #1 ranking on February 6 was the first for the Tigers since May 13, 2002, when Clemson was ranked #1 in all three major polls. It was the earliest #1 ranking for the Clemson program in history, as the earliest #1 ranking prior to that was on March 20, 2000, when Collegiate Baseball had the Tigers #1. The Tigers have been ranked #1 for 19 weeks by at least one of the major polls in Head Coach Jack Leggett’s 13th season at Clemson.

Harbin Returns With a Blast After playing only two innings of the first game of the season against James Madison on February 17, Taylor Harbin missed the next five games due to a strained hamstring. He returned at College of Charleston on March 3 and went 1-for-5. In the next two games against #9 South Carolina, he went 3-for-4 with a double in each game. Harbin is 8-for-14 (.571) with two doubles in four games this season. He also is errorless in 14 chances at second base.

Moskos the Leading Lefty Sophomore Daniel Moskos (Alta Loma, CA) has stepped up to become the team’s top lefthander out of the bullpen this season. After struggling as a freshman in 2005, he has appeared in four games and has a 0.90 ERA in 10.0 innings pitched. He also is holding opponents to a .167 batting average.

Tigers Blank College of Charleston 6-0 Three pitchers combined for a six-hit shutout in #1 Clemson’s 6-0 win at College of Charleston in front of a record crowd of 3,122 fans at Patriots Point Field on March 3. P.J. Zocchi pitched 6.0 innings, allowing five hits and two walks with four strikeouts to earn the win. Matt Vaughn and David Kopp combined to pitch 3.0 scoreless innings to close out the game. The Tigers scored two runs apiece in the fourth, fifth, and sixth innings, highlighted by Travis Storrer’s two-run, opposite-field homer in the fourth. Storrer had a game-high three hits, while Andy D’Alessio added a solo home run in the sixth inning.

Tigers Split Series With Gamecocks Clemson and South Carolina split a two-game, home-and-home series on March 4,5. The Gamecocks took game one 6-2 before the Tigers answered with a 6-4 victory in game two, as each team won on its home field. Clemson hit .277 to the Gamecocks’ .246 batting average. Andrew Cruse pitched 5.2 scoreless innings in relief to lead #9 South Carolina to a 6-2 victory over the #1 Tigers at Sarge Frye Field on March 4. Jason Berken suffered the loss, as he lasted only 3.1 innings. Daniel Moskos pitched 4.2 solid innings in relief, allowing only one run on two hits. Clemson tied the score in the third inning on Tyler Colvin’s two-run single, but South Carolina took the lead back for good with three runs in the fourth inning, and was aided by a Berken throwing error and a passed ball. Clemson outhit South Carolina 8-7, but stranded nine runners on base. Taylor Harbin had a game-high three hits.

Top-ranked Clemson scored three runs in the seventh inning, highlighted by Marquez Smith’s two-out, two-run single, to rally for a 6-4 win over #9 South Carolina at Doug Kingsmore on March 5. South Carolina held a 3-0 lead before the Tigers chipped away with single runs in the third, fourth, and fifth innings.

After the Gamecocks took a 4-3 lead in the seventh inning on a two-out single by Drew Martin, Clemson answered with a three-run seventh after the first two batters of the frame were retired. Travis Storrer’s bases-loaded walk tied the score, then Smith’s line-drive single to left gave the Tigers the lead for good. Josh Cribb earned the win in relief, while Steve Richard picked up the save. Harbin added a game-high three hits to lead the Tigers to the win on Jack Leggett’s 52nd birthday.