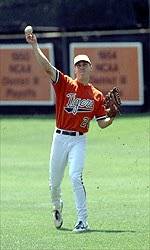 CLEMSON, S.C. – Sixth-ranked Clemson (29-7) plays host to arch-rival and #2 South Carolina (32-4) Wednesday night at 7:15 PM at Doug Kingsmore Stadium. The game is officially a sellout, but a number of tickets still remain for Clemson faculty, students, and staff. The game will be broadcast on television by College Sports Southeast and on radio on the Clemson Sports Network.

Never before have the two teams met ranked as high in the polls. Clemson leads the all-time series 148-97-2 and has won three games in a row in the series. Clemson won the only game in ’98 and won both games in ’99. In Columbia, Clemson won 8-7 and won by a 5-4 score at Clemson one week later in 2000. Clemson is 13-6 against South Carolina under Head Coach Jack Leggett.

South Carolina, led by fourth-year Head Coach Ray Tanner, has won seven games in a row by a total of 11 runs. In the Gamecocks’ four games last week (three against Mississippi State and one against The Citadel), they won each game by one run. They have won all seven games without the benefit of a double-digit hit total, meaning pitching has stepped up and clutch hitting has prevailed. South Carolina is 12-3 in SEC games and 7-2 away from home this season. They won their first 22 games to start the season. The game will be the Gamecocks’ first mid-week road game of the season.

Brennan Dees leads the team with a .349 batting average. The Gamecocks’ top power hitters are Tripp Kelly, who has 11 homers and 37 RBIs, and Brandon Pack, who has 10 homers and 40 RBIs. Nate Janowicz has stolen 16 bases in 18 attempts. The Gamecocks are hitting .295 as a team and have a .964 fielding percentage. South Carolina returned just three of eight position players from a season ago.

Pitching-wise, South Carolina has a 2.86 team ERA and .217 opponent batting average. The team has struck out 330 batters in 324.1 innings and has allowed just 119 walks, good for a 2.8 strikeout-to-walk ratio. Righthander Kip Bouknight, the team’s #1 starter, will start on the mound. He has a perfect 9-0 record and a 1.92 ERA in 10 starts. He has thrown two shutouts and is holding opponents to a .199 batting average. In 75.0 innings this season, he has allowed just 54 hits and 14 walks to go along with 86 strikeouts. Scott Barber has seven saves out of the bullpen. He has struck out 52 while walking only eight and has a 2.19 ERA in 49.1 innings.

Clemson will counter with its #1 pitcher, righthander Scott Berney (7-2, 1.46 ERA). He has suffered the loss in each of his last two starts, but Clemson has scored just one run and had five hits combined in his those two outings. Berney has an ACC-best 1.46 ERA and has a .186 opponent batting average. It will be Berney’s first mid-week start of the season. Clemson has a 2.80 team ERA.