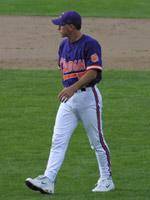 Clemson (18-13) will play host to Winthrop (19-13) Tuesday at Doug Kingsmore Stadium. First pitch is scheduled for 7:15 PM. There will be no live Clemson radio for the game, however Winthrop will have live radio coverage available on the internet at WinthropEagles.com. Live stats will be available on Clemson’s website.

Tiger Head Coach Jack Leggett is 4-1 against Winthrop as Clemson’s head coach. He was also 3-0 against the Eagles as Western Carolina’s head coach.

The Starting Pitchers Winthrop will start sophomore lefthander Chase Edwards (2-1, 3.44 ERA) Tuesday. The Chapin, SC native has started eight games and relieved in one other game. In 34.0 innings pitched, he has allowed 36 hits and eight walks while striking out 25.

The Tigers will counter with sophomore righthander Kris Harvey (5-0, 3.89 ERA) Tuesday. The Catawba, NC native has started a team-high eight games and has pitched 34.2 innings. He has also struck out 32 and is holding opponents to a .246 batting average.

The Eagle pitching staff sports a 4.78 ERA and .271 opponents’ batting average. The staff has also walked just 89 in 32 games (2.86 walks per nine innings pitched). Reliever Chris Leroux has a 0.90 ERA and three saves in 10 relief appearances.

Clemson Overview Clemson enters the game against Winthrop Tuesday after getting swept at Virginia over the weekend. The Tigers, who are 12-5 at home, are hitting .298 overall, led by Brad McCann’s .406 batting average. He has hit safely in 46 of his last 51 games.

Cavaliers Sweep Tigers Virginia swept Clemson by a combined three-game score of 12-5 from April 9-10 at UVa Baseball Stadium. Clemson hit just .163 in the series and only went 3-for-32 with runners on base. It was Virginia’s first three-game series win against the Tigers since 1974. In fact, the Cavaliers had not beaten Clemson twice in a row since 1974. Jason Berken, Clemson’s #1 starter, did not pitch in the series due to some pain in his elbow. The losses snapped Clemson’s nine-game winning streak entering the series, while the sweep upped the Cavaliers’ winning streak to nine games.

In game one Friday, Virginia scored three runs with two outs in the third inning to pull away from Clemson and win 5-1. Lefty starter Andrew Dobies allowed just one run on four hits to earn the win. Ryan Zimmerman’s two triples were key in the Cavaliers’ victory in front of a record crowd of 2,000 fans. Brad McCann’s and Russell Triplett combined for four of the team’s five hits. Lefty starter and Roanoke, VA native Tyler Lumsden allowed four earned runs in 7.0 innings pitched, as he suffered the loss.

In game two Saturday, the first game of a doubleheader, the Cavaliers scored two runs with two outs in the eighth inning to down the Tigers 4-3. Kris Harvey solo homer to left field gave the Tigers a 3-2 lead, but three straight hits, including two doubles, after the first two batters were retired plated two runs. Harvey and Garrick Evans had two hits apiece to lead the Tigers. Matt Dunn had four of Virginia’s seven hits. The Tigers wasted a good effort by lefty starter Robert Rohrbaugh, who allowed just four hits, two runs, and one walk in 7.0 innings pitched. Joe Koshansky allowed six hits and one earned run in 8.0 innings. His game-tying hit and game-winning run helped him pick up the victory.

In game three, the second game of a doubleheader Saturday, Virginia scored three runs in the first three innings and hung on for a 3-1 win. Matt Avery pitched his first career complete game, allowing just four hits. Freshman righthander and Virginia native Stephen Faris suffered the loss despite allowing just four hits and one walk in a career-high 6.1 innings pitched. Clemson had its best chance to cut into the 3-0 deficit in the fourth inning, but only came away with one run. McCann hit a run-scoring double with no outs, putting runners at second and third. But Avery got the next three Tigers in order on strikeouts to end the threat. The game lasted just one hour, 57 minutes.

The program recognizes collegiate athletes whose athletic accomplishments, in the opinion of their strength coach, reflect their dedication to strength training and conditioning. The athletes are also recognized for their academic and personal accomplishments, as wel as their integrity as student-athletes.

“Herman has a work ethic that cannot be matched,” said former Tiger Baseball Strength Coach Tom Melton. “As a true freshman, he broke the school records for the 225-pound rep. test (40) and pull-test (48). He was awarded the Dedication Lifter Award, which is voted on by his teammates. For the second year in a row, Herman won the Omaha Challenge, which is a four-day event comprised of resistance, agility, and conditioning tests to measure muscular endurance, mental toughness, and team unity.

“Herman is not just a good performer in the weight room, he also takes care of business in the classroom and on the baseball field as well. The pre-business major has over a 3.3 GPA.”

Starting a Good Move for Rohrbaugh Sophomore lefthander Robert Rohrbaugh (Littlestown, PA) made his first start of 2004 and second career start at Texas Tech on March 21. Since then, he has been a weekend starter for the Tigers, starting three ACC games as well. He has pitched at least 6.0 innings in each of the three ACC starts, allowing only five earned runs in 21.0 innings pitched. He also is 2-0 with 11 strikeouts against only two walks and has a 2.14 ERA in ACC play as a starter.

Overall this year, he has made seven relief appearances and four starts. He is 2-1 with a 2.81 ERA. In 32.0 innings pitched, he has yielded just six walks and no homers to go along with a .235 opponents’ batting average. In 61.2 innings pitched over two seasons, he has a 2.92 ERA and has yet to allow a home run.