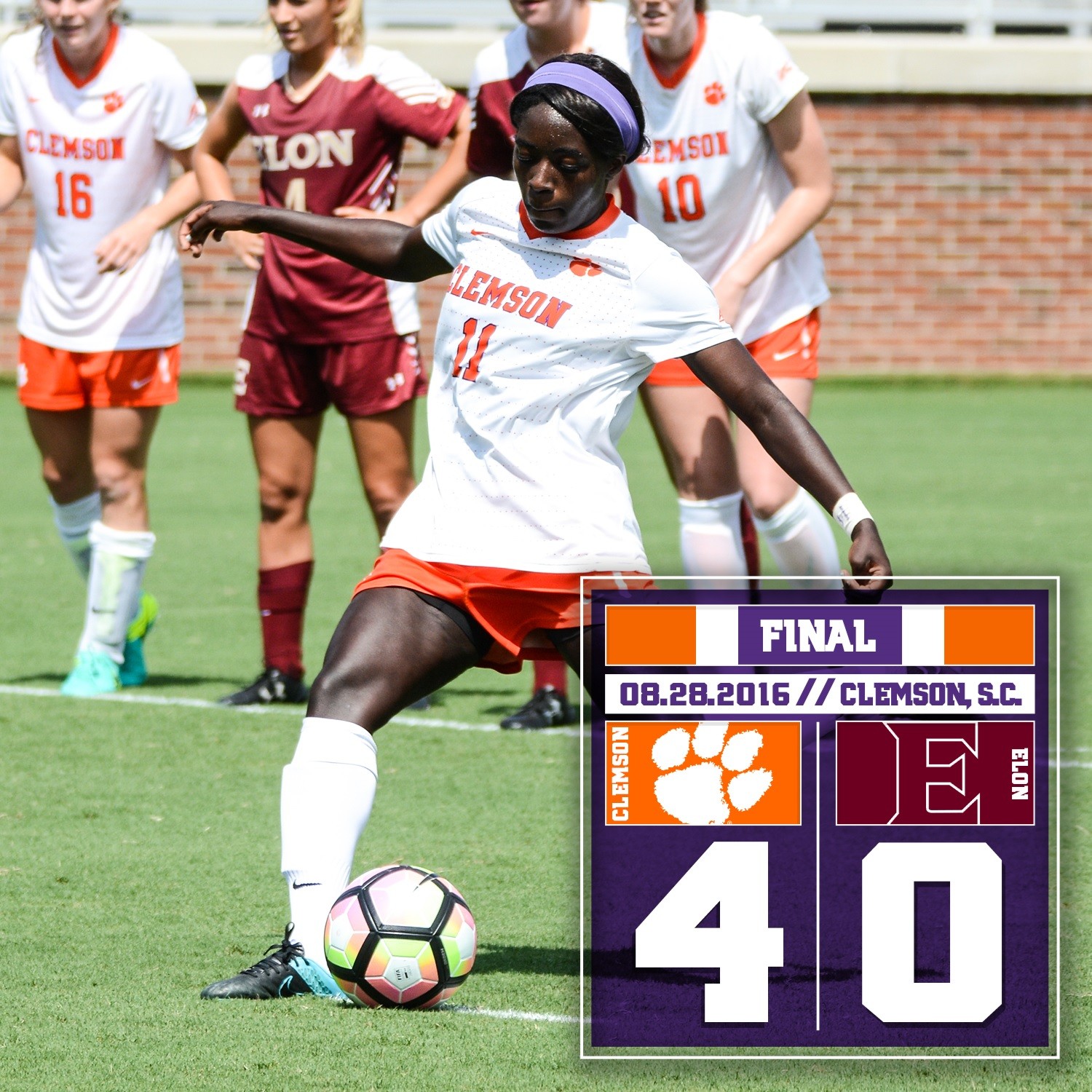 CLEMSON, S.C. – Two goals by senior Catrina Atanda helped lift the eighth-ranked Clemson women’s soccer team to a 4-0 victory over Elon on a hot, humid Sunday afternoon at Historic Riggs Field. With the win, the Tigers improve to 3-1 on the season, while the Phoenix fall to 1-3.

Senior Catrina Atanda netted the only goal of the first half, less than six minutes in to the match. She took the ball away from an Elon defender near the top of the 18-yard box and sent a diagonal shot into the net. Atanda scored her second goal of the match, and third of the season, on a penalty kick in the 51st minute. Forty seconds later, Shannon Horgan put the Tigers up by three with a close-range shot that was assisted by Gabby Byorth. The fourth and final goal of the day was an own goal in the 53rd minute. It capped off a 108-second span in which Clemson scored three goals.

For the match, the Tigers outshot the Phoenix 27-4 and 8-1 in shots on goal. Senior keeper Kailen Sheridan earned the win in goal for the Tigers, and recorded one save, while she and freshman Sandy MacIver combined for the shutout.

The Tigers head to Columbia, S.C. on Friday, Sept. 2 to face instate rival South Carolina. The match between Clemson and the Gamecocks kicks off at 7 p.m. at Stone Stadium.

Head Coach Eddie Radwanski Quotes“It was a good day. I was impressed with Elon in the first half. They were well-organized and had a good tactical plan, which didn’t surprise me because they are well coached. At halftime, we talked about being more patient and making better decisions, and credit to our kids, they did that in the second half. We scored three goals in quick succession, which was a good sign.

“It’s never easy to play the second game of a weekend on just one day’s rest, especially after traveling, and then in this heat, but our team did not make excuses and fought through it. I was also pleased that we were able to play a lot of players today. That experience is only going to benefit us going forward.”