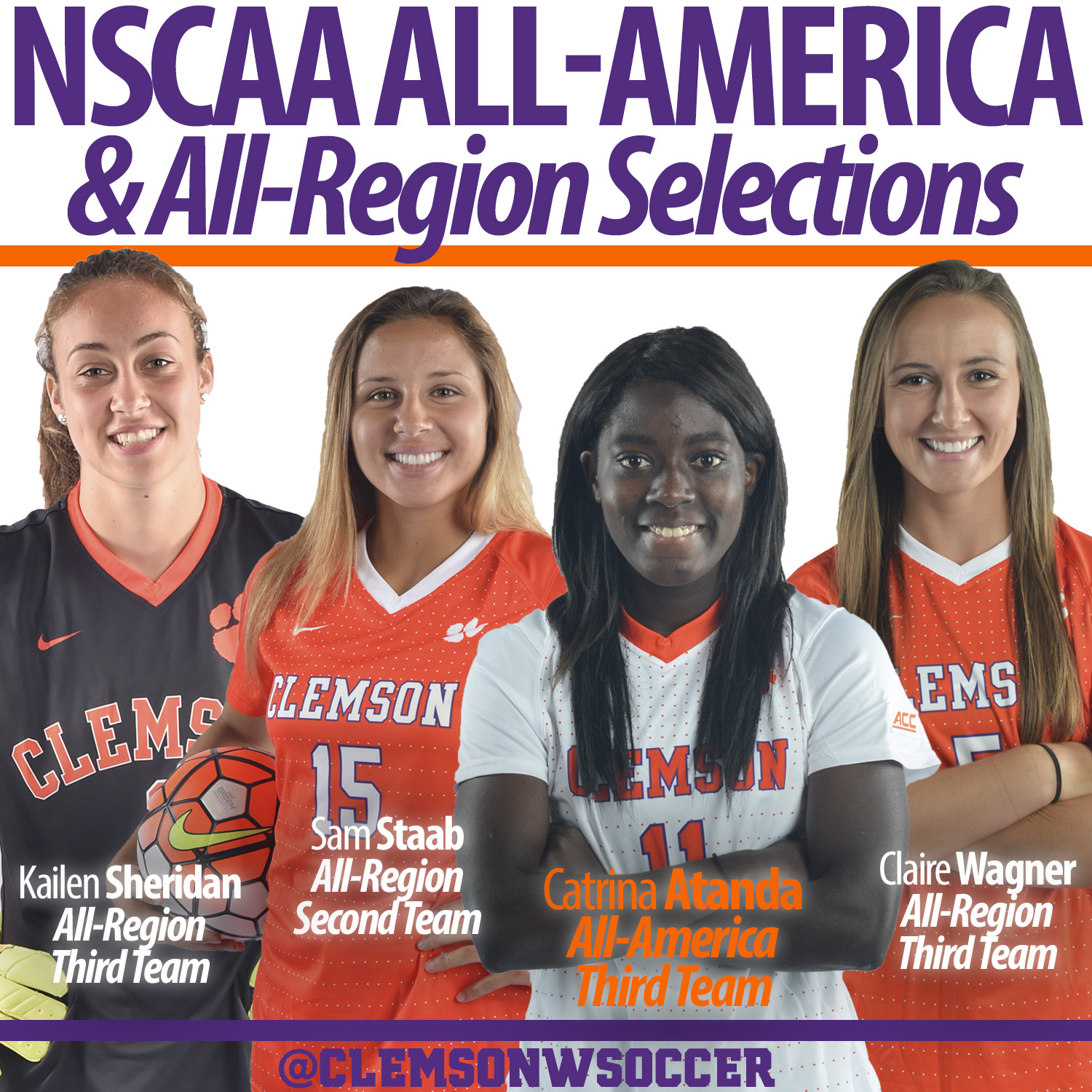 CLEMSON, S.C. – Senior midfielder Catrina Atanda was named to the 2016 NSCAA NCAA Division I All-America Third Team, as announced by the NSCAA on Friday. Earlier this week, Atanda, along with sophomore Sam Staab and seniors Kailen Sheridan and Claire Wagner were named to the NSCAA’s All-Southeast Region Team.

This is Atanda’s first career NSCAA All-America honor, and the NSCAA All-Southeast Region First Team selection was also the first of her career. The Belle Mead, N.J. native was also named to the All-ACC First Team in 2016, after being selected to the conference’s second team the previous two seasons. Atanda finished the season with 12 goals, including five game-winners, and four assists for 28 points. She concluded her Clemson career with 30 goals, which ranks eighth all-time in Clemson history for career goals.

Staab was named to the NSCAA All-Southeast Region Second Team, and was also an All-ACC Second Team honoree in 2016. The defender from San Diego, Calif. was tied for second on the team in scoring with 15 points, on two goals and 11 assists. The 11 assists are best in the ACC and ranked 10th in the nation in that category. Just two seasons into her Clemson career, Staab is already tied for ninth in school record books for career assists, with 17.

Sheridan earned NSCAA All-Southeast Region Third Team honors in 2016, and, earlier this fall, became on the second Tiger ever to earn All-ACC honors four times in her career (first team in 2014, 2015 and 2016, third team in 2013.) Sheridan concluded the season with 66 saves and a .805 save percentage, and just 16 goals allowed for a 0.77 goals against average. The native of Whitby, Ontario ranks in the top five in program history in four career categories: first in goals against average (0.83), second in solo shutouts (28), fourth in saves (229) and fourth in save percentage (.784).

Wagner was also named to the All-Southeast Region Third Team by the NSCAA. The product of Cary, N.C., who earned her second-career All-ACC Third Team honor in 2016, helped anchor the Clemson defense in 2016, which allowed just 17 goals in 23 matches for a 0.71 team goals against average for the season. Wagner also scored four goals and two assists for the Tigers in 2016, despite playing a defensive role.