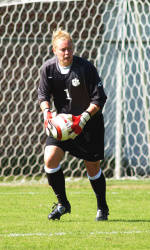 Clemson, SC – Lady Tiger goalkeeper Ashley Phillips was named a 2007 Preseason All-American by Soccer Buzz as announced by the association on Monday, August 20. Phillips, a senior from West Peabody, MA, is one of 18 preseason honorees, and Clemson is one of 12 schools represented on the team.

Phillips was recently named to the 2007 Hermann Trophy Watch List and is one of 45 players on the preseason list for the most prestigious individual award in intercollegiate soccer. In 2006, she was named a third-team All-American by Soccer Buzz and the NSCAA and was named to the All-Region First Team by both associations. She was a member of the All-ACC Second Team in 2005 and 2006.

Phillips recorded 119 saves in 2006, which ranks her first in single-season saves by a Clemson goalkeeper. She currently ranks second in Clemson record books for career solo shutouts (16) and career save percentage (.812). She enters her senior season needing 67 saves to move into first place in Lady Tiger history for career saves.

Head Coach Todd Bramble’s Lady Tigers will play an exhibition match at Davidson on Tuesday, August 21 at 6:00 p.m. and then will play host to Georgia on Saturday, August 25 at 7:00 p.m. in another exhibition contest. Clemson will open the regular season on Friday, August 31 against Liberty. The match will begin at 5:00 p.m. at Riggs Field.