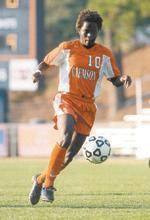 Two Clemson women’s soccer players were named to the National Soccer Coaches Association of America (NSCAA) All-South Region Team as released by the NSCAA Thursday. Deliah Arrington was named to the first team, while Heather Beem was named to the third team.

This past season, Arrington was named the Atlantic Coast Conference Player of the Year and was named first-team All-ACC. She is the first Clemson women’s player to receive this award. Arrington, a senior from Pawleys Island, SC finished the season with 18 goals and seven assists for 43 points. Arrington finished her career first in Clemson history for most career points (127) and most career goals scored with 50. She also finished fourth in school history for most career assists with 27.

Clemson finished the season with a 14-8 record overall and was ranked in the national top 25 by the various soccer polls. Both players are now eligible for All-America honors to be announced in the next few weeks.