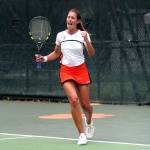 CLEMSON, SC – Clemson women’s tennis freshman Ani Mijacika added another accolade to her impressive list of accomplishments for the 2007 season, as the native of Makarska, Croatia was announced as the ITA Southeast Region Rookie Player-of-the-Year on Monday morning. The Tiger rookie had previously been named the ACC Freshman-of-the-Year and currently boasts the #27 national ranking.

“We couldn’t be more proud of Ani,” Head Coach Nancy Harris said. “She is very deserving of this award after leading her team, as a freshman, to new heights. We are excited for her to continue to lead this team as we prepare for the NCAA Championships in Athens.”

Mijacika has compiled a 25-6 singles record for the 2006-07 season and won her 20th dual match on Saturday against Virginia in the regional finals, helping Clemson advance to the NCAA Round of 16 for the third time in the last four years. She posted a perfect 11-0 singles record in the ACC regular season and put together a 14-match winning streak during the year. Mijacika also owns a 17-5 record in doubles matches and is ranked 11th in the Fila/ITA Tennis doubles poll with Federica van Adrichem.

Mijacika and the Tigers will continue their run in the NCAA Tournament on Friday as Clemson will face California in the round of 16 in Athens, GA. She will also compete in the NCAA Individual Championships later this month after earning bids to both the singles and doubles tournaments.