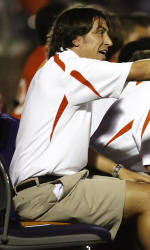 Two-Boys Gumede scored first for the Blazers on a penalty kick at the 22:43 mark into the match.

Babayele Sodade scored on a break-away goal in the 42nd minute to give Alabama-Birmingham a 2-0 advantage.

Reed Matte concluded the scoring for the Blazers in the 60th minute on an unassisted goal.

“I thought that is was a match of two even teams,” said Clemson Head Coach Phil Hindson. “They scored on a penalty kick and I was thinking we were playing well. In the second part of the match we were playing well but we committed a mistake and this set up a break-away opportunity for them and they scored and went up 2-0. At this time, we started to panic and we gave up another goal. That breakdown we had when we gave up the second goal changed the game. However, we learned a lot from this match, and we need to move on and continue to work hard in practice.”

Clemson will play host to USC Upstate in an exhibition match on Wednesday, August 26, at 7:00 p.m. in the Tigers¹ next action. The Tigers will start the regular season on Tuesday, September 1, as Clemson plays host to Gardner-Webb at Historic Riggs Field. Match time is set for 7:00 p.m.