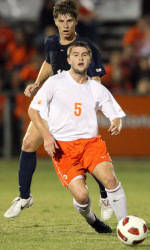 BIRMINGHAM, AL – Sodade Babayele scored the game-winner with 2:26 left to go in regulation and assisted on the Blazers’ other goal to lead Alabama-Birmingham to a 2-1 victory over Clemson in a men’s intercollegiate soccer match at Birmingham, AL Saturday night.

It was the season opener for both teams. The crowd of 3,141 set a new single-game regular season record for Alabama-Birmingham.

At the 87:34 mark, Chris Williams sent a pass to Babayele from the middle. Babayele’s shot from the right and 10 yards out went just inside the left post that was eventually the game-winner.

Alabama-Birmingham began the scoring in the middle of the first half at the 29th minute. Sodade passed the ball from the middle and above the arc to Diego Navarrete near the right corner of the box. Navarrete lofted a diagonal shot over Clemson’s goalkeeper Cody Mizell to give the Blazers’ a 1-0 advantage.

The Blazers threatened again at the 36:43 mark as Chase Wickham drove towards the right post. Just inside the box, Wickham fired a shot, but the attempt was saved by Mizell at the right post.

Clemson had two serious chances right before halftime. With 1:19 left to go in the first half, Alex Stockinger fired a 15-yard shot that went over the goal. With :21 seconds left, The Tigers Ben Myers rifled a shot from just inside the box from the right, but it was saved by the Blazers’ goalkeeper Carl Woszczynski.

Clemson attacked the goal midway in the second half. Iain Smith had a 12-yard shot that went over the goal and Stockinger fired a 35-yard attempt that was saved and knocked out of bounds in the 63rd minute.

The Tigers tied the score 1-1 at the 69:08 mark when Austin Savage dribbled through the defense towards the left corner of the box. Savage drilled a diagonal shot into the lower right corner of the goal beating Woszczynski to his left.

Both teams had nine shots each, and Clemson had seven corner kicks compared to the Blazers’ 2. The Tigers’ goalkeeper Mizell had three saves as did the Blazer’ Woszczynski.

Clemson will play host to South Carolina in the home opener for the Tigers on Friday, September 2 at Historic Riggs Field. Match time is 7:00 p.m. Organizers are attempting to break the Clemson single-match, regular-season attendance record of 7,012 at this game.