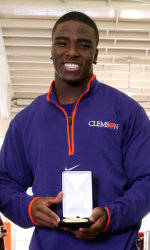 Ford earned his first national championship on Saturday, claiming the 60m dash title at the 2009 NCAA Indoor Track & Field Championships. The crown is Clemson’s second in the event in the last three years, as former teammate Travis Padgett won the NCAA title in 2007. Ford is the ninth individual NCAA indoor champion in men’s track & field history at Clemson.

Ford got a solid start out of the blocks, and then sped past runner-up Trindon Holliday of LSU during the middle portion of the race. Ford’s time in the final was 6.52, one hundredth of a second shy of his preliminary time from Friday. Ford tied the national meet record with his 6.51 in Friday’s session.

Ford now has three All-America honors in track to his credit, including a pair at the indoor national meet. He placed third in the 60m dash as a freshman in 2007. Ford was a top-five finisher last season in the 100m dash outdoors.