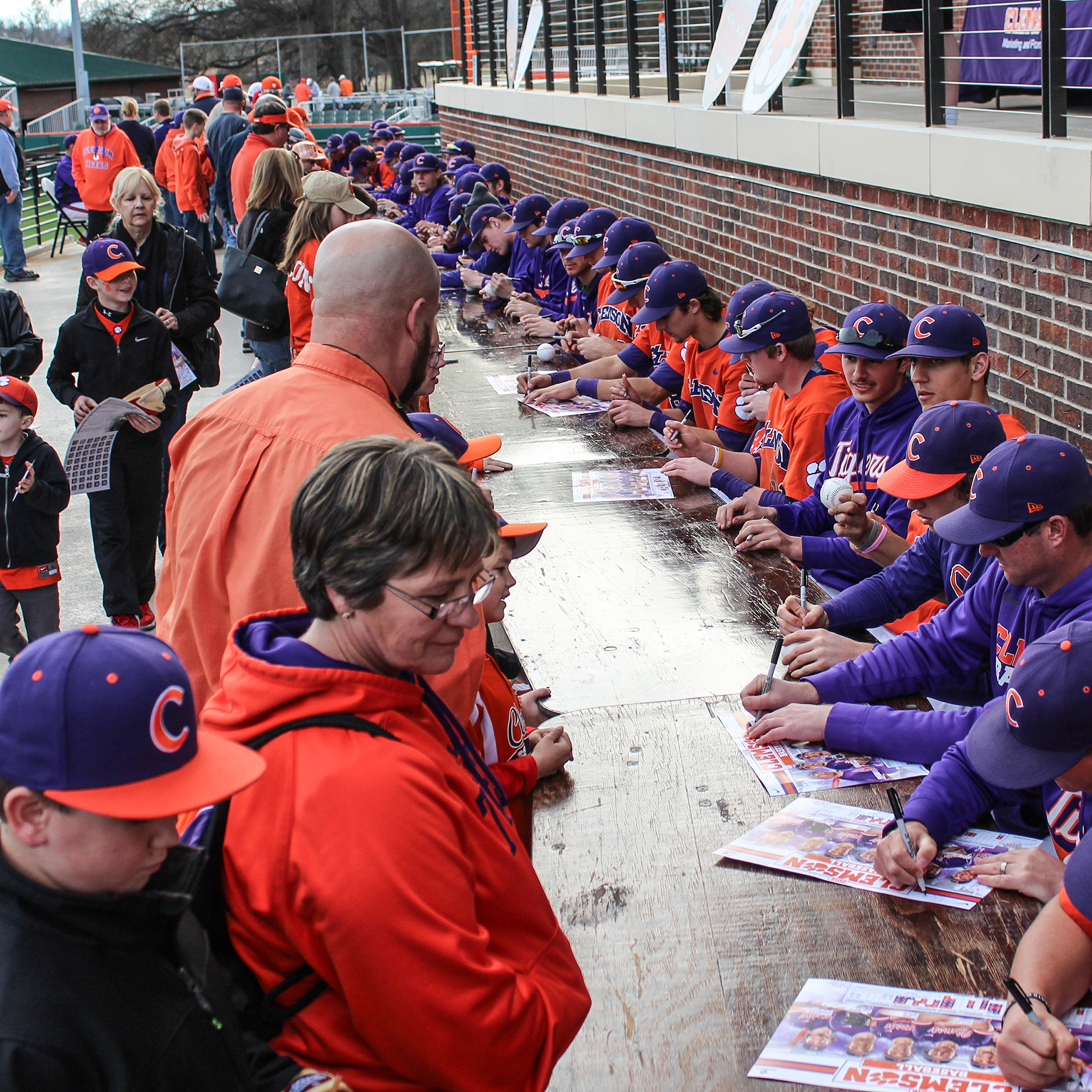 A Full Day For Tiger Baseball

During the 2015 season, Clemson baseball was second in the ACC and ninth in the nation in home attendance with an average of 4,251 fans per game. For this year’s team, Saturday was all about thanking those fans for their loyalty and giving them the opportunity to get a closer glimpse of the 2016 Tigers.

The morning started off with players and coaches splitting up and delivering season tickets to Clemson residents.

“Delivering tickets was really special,” said head coach Monte Lee. “To see the people of Clemson and how excited they get for us to come and deliver the tickets…I’ve never been a part of anything like that, so it was a really cool experience for me as well. I love how appreciative the fans are that we do that, and I think it’s a great thing for our guys to be involved with.”

“It’s a good experience,” stated junior Andrew Cox. “It’s good to get out in the community and give back to the people that support us so much. To go out and be able to see their faces and give them their tickets is a good opportunity.”

In total, the team visited over 100 houses and shops downtown, and ticketholders were overjoyed to have a chance to talk in person with the Tigers before the season gets underway.

Residents of Clemson for 12 years, Crawford and his wife have purchased season tickets for 20 years and used to regularly make the drive from Greenville for games. Crawford emphasized how much he values the Clemson baseball experience.

“I love football, but baseball is right there,” said Crawford. “I love getting out and watching the kids compete. We have a lot of friends that go to games, and we have a good time with it.”

Shortly after noon, the team began to scrimmage as part of the program’s first Fan Fest. Fans were able to see a nine-inning game that was highlighted by Chris Okey’s home run.

Fan Fest was free and open to the public and included activities for children, like an inflatable slide, speed pitch and face painting. The new player facility was also open for fans to walk through and explore. There was even a place for fans to have their own Clemson baseball emoji created, and the players signed autographs for every fan in line after the scrimmage.

“Fan Fest exceeded what I expected,” admitted Lee. “I had no idea that this many people were going to show up. There must have been a couple thousand people. It was a really, really cool event. A lot of people were in the player facility, checking it out, and a lot of people were watching our team play today. Overall, it was an amazing day.”

With the season opener right around the corner, it was evident throughout the day how much players and fans alike were looking forward to February 19.

“Seeing everyone out here was really exciting,” said freshman Brooks Crawford. “It was a blast to see how excited they are for the season, and I’m excited for opening day.”

“I am excited,” added Lee. “I’m ready to go. I think our team is ready to go, and I think we’re as close to being ready as we can be. We still have a few things we have to work on, but overall, I think the guys are excited.

“They’re a pretty loose group, they play hard, they do things the right way and we’re ready to get going.”