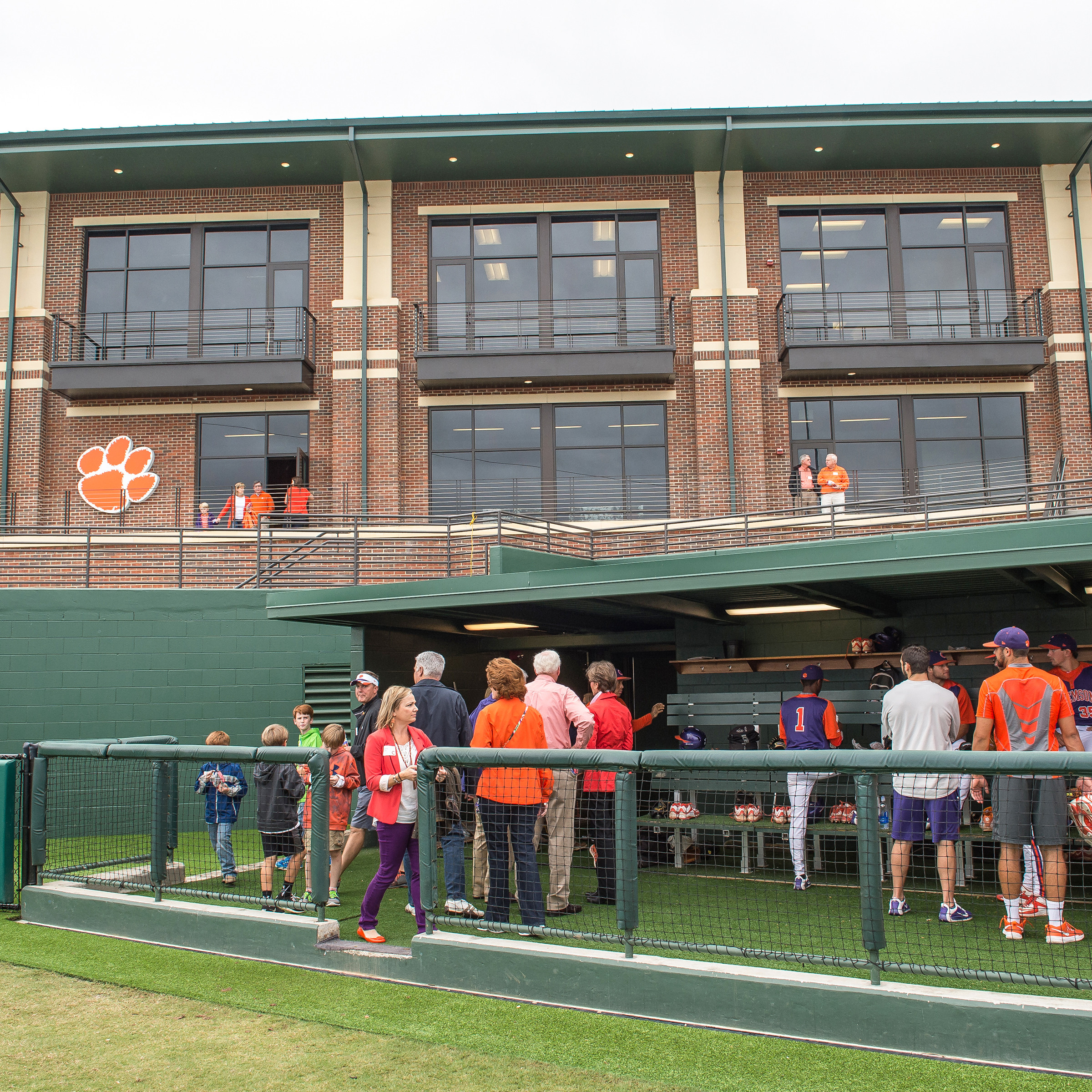 A Facility Second To None

In the 2016 season, the Clemson baseball staff will have several new faces, including Monte Lee, who was announced as the new head coach of the Tigers on June 18, 2015. But the coaching staff is not the only aspect that will look a little different.

On October 2, director of athletics Dan Radakovich officially opened the new baseball player facility located behind the first-base stands. The new facility, a $9 million addition to Doug Kingsmore Stadium, is the first building to open as part of the Will to Lead Campaign at Clemson University.

The 20,000 square-foot facility replaces the old 3,500 square-foot locker room and players’ lounge facility that was housed under the first-base stands. The new complex includes many state-of-the-art features that will improve the experience of coaches, players and staff, and also improve the recruiting process at Clemson.

Beyond the lobby is a players’ lounge, complete with an area for games. The walls are covered with graphics of former players, quotes and highlights of Clemson baseball, including the 2010 regional victory when the Tigers climbed the outfield wall to celebrate with fans in the Cajun Café.

Five-flat screen televisions surrounded by modern furniture throughout encompass the lounge, which is complete with a kitchen area and high-stooled seating that is used for pregame and postgame meals.

The old player lounge is now part of an expanded training room for the athletes with a medical office, cold and hot tubs as well as treatment tables for day-to-day operations of the athletic training staff.

Connected to the dugout is an area where players store their equipment, including drying racks for shoes and industrial sinks to keep the iconic white cleats looking brand new.

Exiting the mudroom is a very unique aspect of the facility. An alumni locker room is a feature that is next to the player locker room. It is the home of former Tigers who return to their home at Clemson to work out during their professional offseason.

Frosted doors to the left of the alumni locker room open to a beautiful, dark, wooden locker room layout, complete with 44 lockers exclusively for the players. Each locker door is engraved with an orange tiger paw that opens to an area that players keep their equipment and personal items locked in a safe. The inside of the locker includes a personal power outlet that can be used to charge various electronics.

Below each locker is a drawer that is utilized for footwear storage. The center of the locker room features a customized lighting system that casts an orange tiger paw on the center of the floor to add a unique look to the room when all lights are turned off. Four televisions in each section of the room are located above the lockers and 10 showerheads replace the four that were once part of the old player facility.

To the left of the locker room is an elevator that services all three floors of the complex. When entering the second floor, a scenic view of Doug Kingsmore Stadium is the backdrop of the auditorium that has 42 gray, movie-theater style seats, each with an orange tiger paw backing.

The second story also features mannequins that sport the traditional uniforms of the Tigers, complete with the iconic white cleats and “Clemson” styled pants, and includes a kitchen that is utilized for various events and meals. The second-floor classroom leads onto a patio area that is utilized during recruiting events as well as additional standing room during games.

The third floor of the complex houses the offices for coaches as well as the director of baseball operations. Each office, with ceilings over 10 feet high, includes a large television and modern desk. The coaches’ offices face the field and have personal balconies overlooking Doug Kingsmore Stadium. A workroom, kitchen area and conference room featuring an 80” television are also on the third floor.

“With a facility like this, our players will show you (the fans) how to play the game of baseball the right way,” said Lee during the ribbon cutting ceremony. “There gratitude for this facility will be displayed on the field.”

‘This truly is a spectacular facility, and we hope to show our appreciation for it on the field, in the classroom and in our lives as we go forward.”

“It’s such an incredible complex, and I am blessed to be here to experience it.”

Former players Bob Mahony, Neil Simons and many other players and coaches were instrumental in the process of raising funds for the facility, making it one of the finest facilities of its kind in the nation.

As a former student equipment manager, I remember discussing the project with director of baseball operations Brad Owens.

“It will be the nicest facility in the country once it is done,” said Owens. “Everything is being done the right way, and it will be unlike anything else in the nation.”

Owens foresight was certainly correct, as Tiger players in 2016 and beyond will reap its benefits.