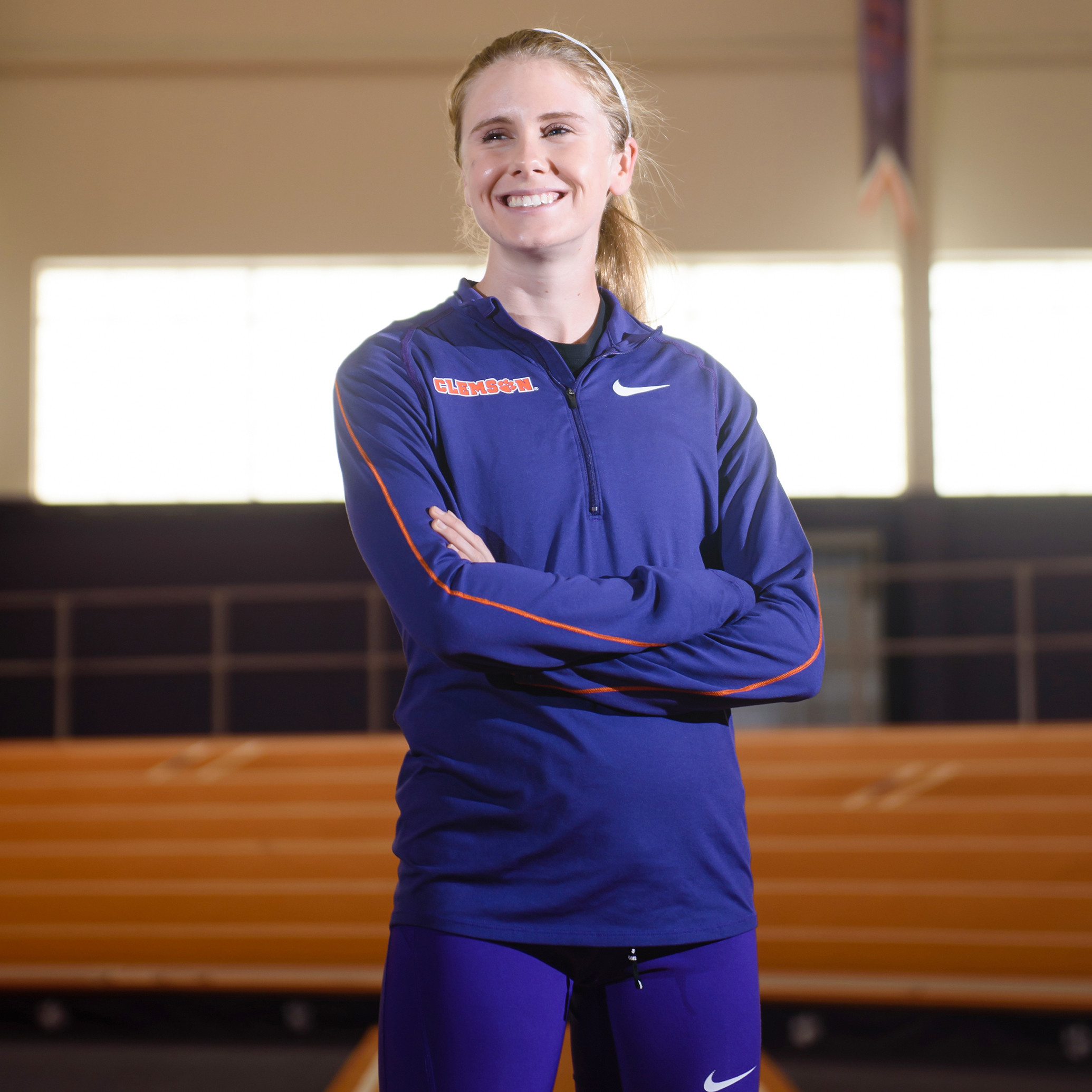 Grace Barnett has a distinct recollection of the first time she had a conversation with Clemson’s new track & field and cross country head coach, Mark Elliott.

“It was August 2013 and he told me, ‘If you put 20 girls in a room and ask someone blindly to pick the best runner, they would never pick you’,” recalled Barnett with a laugh.

Elliott’s blunt assessment probably did not help quell the fears that Barnett, at the time a freshman from Pawleys Island, S.C., had about her place on the Tiger roster. When Clemson made a coaching change over the summer and brought in Elliott, a middle distance expert from Louisiana State, Barnett’s mind was swimming.

“When the (previous) coaches told me I could walk on to the team, I was sold,” she said. “But when I heard coach Elliott was coming, it was a huge deal. He’s coached national champions.

“One of the first things he said publicly was that he was going to hold cross country tryouts, so I was traumatized and didn’t think I would make the team.”

Barnett, convinced she no longer had a spot on Clemson’s roster, doubled her weekly mileage and trained harder than ever that same summer while working full-time as a cashier at a grocery store.

“My training was based on my fear that I wouldn’t have a spot on the team,” she admitted.

Her resumé was solid enough. She had won three state championship track titles as a junior at Waccamaw High School. She was a two-time state runner-up in cross country. But according to Barnett, her times were “really bad in retrospect.”

After a demotion to junior varsity soccer in 10th grade, and at the encouragement of volunteer cross country coach Michael Walker, she began to shift her attention to a potential college career in track and cross country.

Her first college workout came on the dikes that separate Lake Hartwell from campus, and she decided to try and keep up with senior Natalie Anthony. She made it and ran only slightly behind the veteran, a testament to Barnett’s willingness to put it all on the line.

The fall of 2013 began what can only be described four years later as a love-hate relationship with the sport of cross country. While she truly loved the sport in high school, her freshman year offered a series of mental setbacks.

“I was traumatized by cross country my freshman year,” explained Barnett. “At Notre Dame, I fell and didn’t finish the race. Coach Elliott pulled me off the course and sat me down. Another girl on the team was dehydrated, but finished. He said to me, ‘She was sick and she was running around. You’re not sick. Everyone has their demons, and yours is finding the confidence to finish a race.’”

“When I felt fatigue, I’d get freaked out and be paralyzed with fear,” she said. “I’d get nervous two weeks in advance because the races are hard and long.”

Barnett had her share of ups and downs that fall, redshirted the indoor track season and came along slowly during the spring outdoor schedule. She cited a win her redshirt freshman season in the mile at New York’s famous Armory track as a breakthrough, both from a mental and physical standpoint.

“She ran 4:42 and came through with a win at a big meet,” said distance coach Michael Porter. “That’s when I think she first realized she might be different.”

Barnett went on to a big indoor season in 2015. She won the Tyson Invitational in Arkansas and later earned her first All-ACC honor by collecting the bronze medal at the conference championship meet.

Barnett was humbled by one opposing athlete, in particular, as she ascended the distance running ranks within the grueling ACC.

“I placed third in the mile and Colleen Quigley, who was an Olympian for Team USA in Rio last summer, was really nice to me,” said Barnett. “I was intimidated by her and didn’t think I could run with her. Coach Elliott was very mad at me about that. But I looked up to her so much that I was scared to try and race her. She reached out to me some, and that meant the world to me.”

Barnett helped her team sweep the ACC Indoor and Outdoor Championships in 2015, but through two cross country seasons as a Tiger, she had failed to live up to the expectations she and the coaches had established.

Her junior cross country season was a turning point, as she posted consistent times and performances from start to finish. It all came to a head in a 10th-place individual effort at the ACC Championships, her first all-conference nod in cross country.

“I’ve been incredibly lucky to have people believe in me, particularly coach Porter, even when I’ve given them no reason to,” said Barnett, alluding to the struggles early on in her college cross country career.

She gave her coaches plenty of reason to beam with pride on the track during the 2015-16 academic year. She led the distance medley relay to an ACC Championship, Clemson’s first in women’s track in over 20 years. That same meet, she was leading the mile at the bell lap in Boston’s Reggie Lewis Center. She was tripped and slowly succumbed to a sixth-place finish, only to be bumped up a spot following a disqualification to the runner who tripped her.

What unfolded two hours later would prove to be a defining moment in Barnett’s career.

“We were battling with Miami (Fla.) for the team championship,” said Elliott. “We knew then that Grace was hurt to the point where I was certain she wasn’t running the 3,000. Coach Porter didn’t think she was running. The trainer said ‘no,’ but Grace wanted to run.

“I’ve been on a lot of national championship teams. While talent does usually rise to the surface, the ones we see more often as coaches are the complainers. She said, ‘I’m going to run.’ And she meant it, and did it. Her toughness had come full circle.”

Barnett, upset at losing points toward the team race in the mile, wanted to make up for it in the 3,000. She did not do a single stride or drill before the race, and was in tears due to the pain in what she thought was only a stress fracture in her foot.

She ran anyway and placed fifth to give the Tigers a two-point lead heading into the 4×400 relay. Miami would win the event, with Clemson third, giving the Hurricanes a two-point team victory. But Barnett gave it everything she had.

“When I stepped to the line, I didn’t expect to finish the race because I was in significant pain,” said Barnett. “The last 200 meters, my teammates pushed me through it. I’ve proven to myself so many times how weak I can be. But in that instance, I proved to myself the strength that’s also there.”

Barnett went on to earn second-team All-America honors in both the DMR and mile, and shortly after returning to Clemson from the NCAA Indoor Championships, an MRI revealed she had broken the navicular bone in her foot.

She redshirted the 2016 outdoor season and was unable to run again until June 1, a period of nearly three months. But when it came time for the cross country season in the fall of 2016, it was as if Barnett had never suffered the physical setback.

“Grace was in the pool most days of the week and worked her tail off, keeping her fitness throughout that time period to help set her up for summer training and cross country,” said Porter. “No one had to keep tabs on her…she was motivated to do it on her own. What we didn’t see while we were busy coaching was that commitment to stay in shape.”

That commitment paid off in a big way. As a senior in cross country, Barnett was eager to make the jump to one of the nation’s best. A third-place effort at the ACC Championships was the starting point, as it was the best performance by a Clemson female since 1997. She went on to an all-region performance, earning a bid to the NCAA Championships for the only time in her career.

Barnett would make the most out of her only national meet appearance.

“That day at nationals was one of the best days of my life,” smiled Barnett. “I had a horrible race at pre-nationals on the same course trying to run with (national runner-up) Erin Finn of Michigan, and I failed miserably. The weather was horrible, and we knew it would be cold and windy.”

Despite temperatures in the 40s at race time, Barnett was solidly in the front pack the entirety of the race and became Clemson’s first female All-American since 1990 with a ninth-place finish.

“I remember hearing my name a lot during the race,” she said. “People were cheering for me, and I was confused. I knew my mom and my sisters were there, and of course coach Porter. But when I crossed the line, I was still in disbelief of where I finished. I looked up, and (Clemson freshman) Amelia (Jones) was there crying. I didn’t know she was there. She and three or four of my teammates had driven 10 hours to see me race. So I started crying! Someone asked me if I won, because I was so excited.”

Barnett shared a warm embrace with Jones, who was a freshman at Waccamaw High School when Barnett was a senior. While Barnett never won a state championship in cross country, Jones took home three. The first time Jones won the state title, Barnett had surprised her friend at the finish line. Last November, it was Jones who returned the favor.

“It really came full circle when I saw her after my race,” said Barnett. “She’s like a little sister to me. It was incredible to share that moment with her.”

Her Clemson career has provided a lifetime of memories, not only athletically, but also academically. An elementary education major, Barnett carries a near 4.0 GPA and is on track to graduate in December. She began master’s degree classes in January and pushed her student teaching requirement to the fall semester in order to satisfy her degree requirements.

Barnett entered Clemson as a promising student-athlete, yet one with a naivety and lack of self-confidence about her that has come a long way since 2013.

“I don’t think her level of success is something she envisioned,” admitted Elliott. “She’s embarrassed we mention her name so much, but it motivates everyone…even our other coaches use her as an example. She personifies every good thing about being a student-athlete, in every sense of the term.”

Here’s betting if Elliott was asked today to identify the best runner in a group of 20 females, he would choose Grace Barnett every time.