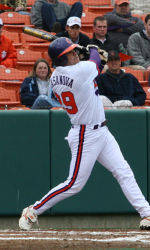 Miami native Adrian Casanova and Taylor Harbin each hit two-run home runs in the fourth inning, and three Tiger relievers pitched 6.2 solid innings to lead #9 Clemson to an 8-6 victory at #11 Miami (FL) on Friday night in front of 2,312 fans at Mark Light Field. It was the Tigers’ 600th all-time ACC regular-season win, as Clemson became the first ACC school to reach that mark. Clemson also improved to 18-7 overall, 4-3 in ACC play. The Hurricanes fell to 23-8, 8-2 in the ACC.

The Tigers’ win ended their five-game road losing streak, while also ending the Hurricanes’ 12-game home winning streak. Clemson, who totaled 10 hits, was led offensively by first-baseman Andy D’Alessio. The Naples, FL native went 3-for-5 with two doubles, three RBIs, and a stolen base. In the last eight games, he is hitting .400 with three doubles, five homers, and 20 RBIs.

Brad Chalk went 2-for-3 with three runs scored, while Casanova added two hits. The Hurricanes were led at the plate by Danny Valencia, Tommy Giles, and Blake Tekotte, who each had two hits. Yonder Alonso added three RBIs as well.

Freshman lefty Alex Martin (2-0) relieved starter Josh Cribb in the third inning and pitched 4.0 effective innings to earn the win. He allowed two runs on three hits. Daniel Moskos pitched 2.0 innings, allowing no runs on two hits with three strikeouts to pick up his third save of the season.

Clemson’s three relievers (Martin, Matt Vaughn, and Moskos) combined to pitch 6.2 innings and allowed just two runs on six hits against a team that entered the game winners of 17 of its last 18 games. Hurricane starter Carlos Gutierrez (7-2) gave up seven runs on seven hits in 5.0 innings pitched, and suffered the loss.

Clemson jumped out to a 2-0 lead in the first inning. Andy D’Alessio then came through with a double down the left-field line, scoring Demmink and Chalk. Colvin also scored on the play, however he had to return to third base when the ball went out of play. That was crucial, because the Tigers could not plate another run in the inning.

The Hurricanes cut the Tiger lead in half in the second inning. Valencia hit a leadoff single up the middle and Giles followed with a walk. After Eddy Rodriguez moved the runners up on a sacrifice bunt, Dennis Raben brought home Valencia with an RBI groundout to first.

Clemson got that run back in the third inning, thanks again to D’Alessio. Chalk led off with a hit-by-pitch and advanced to second on Harbin’s liner that ricocheted off Gutierrez. Colvin laced a single to right, moving Chalk to third, then D’Alessio lined another ball off Gutierrez that turned into a 1-3 putout, as Chalk scored to give the Tigers a 3-1 lead.

In the bottom of the third, Miami took the lead thanks to three runs on only one hit and a costly error. Tekotte led off with a sharp double on a 1-2 pitch through the middle that handcuffed shortstop Stan Widmann, as the ball rolled into left-center. Cribb hit Jemile Weeks on another 1-2 pitch. Then Jon Jay laid down a sacrifice bunt. Demmink, the third baseman, threw wild to first, allowing Tekotte to score and Weeks to move to third on the error. Alonso followed with a deep fly ball to left that Colvin caught at the wall, but Weeks scored on the sacrifice fly to tie the score. Valencia walked and Giles was hit by newly-inserted Martin to load the bases, then Rodriguez hit a potential double-play ball to Demmink. But he bobbled the ball and got the out at first, allowing Jay to score. Two batters later, Martin induced an inning-ending groundout with the bases loaded to avoid further damage.

In the top of the fourth inning, the Tigers took the lead right back thanks to two, two-run homers from two Tigers who entered the game with a combined one home run on the season. Stan Widmann reached when he was hit by a pitch, then Casanova belted a two-run homer just over the wall in left field, his second of the season. Two batters later, Chalk reached on an infield single. During Harbin’s at-bat, Chalk tried to steal second on Gutierrez’s first movement and was caught when he threw to first on the pickoff. But Chalk never stopped and slid into second base just ahead of the throw from first on a play that could have gotten Miami out of the inning. Harbin, who hit the ball hard in his first two at-bats with nothing to show for it, made the Hurricanes pay on the next pitch with a two-out, two-run homer in almost the identical spot of Casanova’s long ball. It was Harbin’s first home run of the season.

The Hurricanes cut the Tiger lead to one run in the seventh inning. Jay reached on a one-out walk, then Alonso hit a two-run homer to right-center on a 3-1 pitch, his fifth of the season. It was the first runs allowed by Martin in his 12.2 innings pitched this season.

Clemson added an insurance run in the ninth inning thanks to some heads-up baserunning. The Tigers loaded the bases thanks a double by D’Alessio, an intentional walk to Travis Storrer, and another walk to Widmann after being down 0-2 in the count. With two outs and an 0-2 count on Casanova, pinch-runner D.J. Mitchell fell down on a designed play to induce a throw from Rodriguez, the catcher, after Chris Perez threw ball #1. After the throw went to second, D’Alessio immediately headed for home and just beat the relay throw back home, giving the Tigers a two-run cushion.

Clemson and Miami will play game two of the three-game series on Saturday at 7:00 PM. The game will be televised live by CSS.