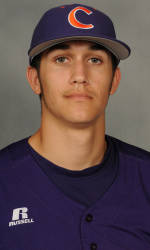 Chris Epps scored on a wild pitch in the 10th inning to lift #9 Clemson to a 6-5 walkoff win over Dayton on Wednesday afternoon at Doug Kingsmore Stadium. The Tigers improved to 7-0, while the Flyers fell to 4-4. It was the first-ever meeting between the two schools.

Senior righthander Tomas Cruz (1-0), the last of nine Tiger pitchers, earned the win, as he pitched a scoreless 10th inning. Freshman righthander Jonathan Meyer was also key in the win, as he pitched 3.0 scoreless innings of one-hit ball with four strikeouts late in the game. Flyer reliever Burny Mitchem (0-3) suffered the loss, as he allowed six hits, two runs, one walk, and four wild pitches with six strikeouts in 3.2 innings pitched.

For the first time in 2010, a Tiger opponent scored first. In the top of the first inning, Brian Blasik hit a one-out single to center and Zach Jacob followed with a two-run homer to left-center, his fifth long ball of the season.

The Tigers responded with a two-out rally in the bottom of the first inning. Jeff Schaus reached on a two-out, infield single, stole second, and scored on Kyle Parker’s single to left field.

In the third inning, Parker lined a one-out single to left field and Wilson Boyd followed with a walk. Richie Shaffer then grounded a single through the left side to score Parker.

Clemson took the lead in the fifth inning. Schaus reached on a fielding error by first-baseman Jonathan Castine and Parker followed with an opposite-field, two-run homer to right field, the junior’s fourth long ball of the season and 30th of his career.

In the seventh inning, a pair of errors helped the Flyers regain the lead. Joe Gayda led off with a double down the left-field line and Zach Blanchette followed with a walk. Jimmy Roesinger then squared around to bunt, but the Tigers walked him on four pitches to load the bases with no outs. Blasik followed with a flyball that fell just inside the right-field line for a single to score Gayda, then Blanchette scored when Parker’s throw from right field was errant. With Jacob at the plate, catcher John Nester threw behind Blasik at first, but his throw was errant, allowing Roesinger to score the go-ahead run.

The Tigers took advantage of a Flyer miscue to even the score in the eighth inning after the first two batters of the frame were retired. Mike Freeman started the rally with a single up the middle. Schaus reached on an infield single as Freeman hustled all the way to third base. Freeman then scored on a wild pitch to tie the score 5-5.

In the ninth inning, Boyd led off with an infield single. Two batters later, Brad Miller grounded a single up the middle to advance Boyd to third with one out. But Nester popped up in the infield and John Hinson grounded out to send the game into extra innings.

In the 10th inning, Epps led off with a single to right field and advanced to second on a wild pitch. Two batters later with an 0-2 count on Schaus, Epps moved to third on another wild pitch. Schaus struck out for out #2, then with Parker at the plate, Mitchem threw his third wild pitch of the inning and fourth of the game to allow Epps to score the game-winning run.

Blasik had a team-high two hits for Dayton, who was 1-for-9 with runners in scoring position.

Clemson will host South Carolina at Doug Kingsmore Stadium on Friday at 6:30 PM in the first of three matchups at three different sites over the weekend between the two rivals.