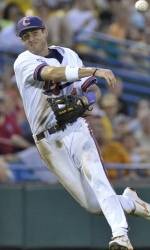 Clemson took a 6-1 lead into the resumption of Tuesday’s suspended game and held on for a 6-4 victory over #6 Oklahoma in Game 8 of the College World Series on Wednesday at Rosenblatt Stadium.

After Oklahoma took a 1-0 lead in the top of the fourth, the Tigers took advantage of erratic Sooner pitching to take the lead in the bottom of the inning. Bobby Shore walked the bases loaded to open the bottom of the fourth. The next batter, John Hinson, lined an RBI single to center to tie the score 1-1. Kyle Parker, giving Clemson a 2-1 advantage. After Wilson Boyd walked to load the bases, Spencer Kieboom singled through the right side, scoring two runs and increasing the lead to 4-1.

Clemson scored a pair of runs in the fifth. With two outs, Kyle Parker tripled to center and scored on a dropped flyball by Sooner left-fielder Max White off the bat of Brad Miller. Hinson then produced another RBI single to right, scoring Miller, to give the Tigers a 6-1 lead. Following the Tigers at-bat, play was suspended due to lightning and heavy rain.

Play resumed Wednesday with the Sooners batting against the Tigers’ new pitcher Will Lamb, who came on in relief of starter Scott Weismann and J.R. Robinson was on the mound for Oklahoma.

In the sixth, both teams were held scoreless, but in the seventh, the Sooners’ Cameron Seitzer deposited a 3-1 pitch from Lamb into the right-field bleachers, slimming the Tigers’ lead to 6-2. Lamb bounced back, striking out the next three batters to limit the Sooner rally to just one run.

The Sooners struck again in the eighth when Tyler Ogle hit a solo homer on a 3-1 count to right field to bring the Sooners within 6-3. After the home run, Lamb issued a walk and Danny Black doubled off the right-field wall to put runners in scoring position with two outs. But Clemson reliever Dominic Leone stopped the rally. After issuing a walk, Leone got pinch-hitter Casey Johnson to pop out to end the threat.

In the ninth, the Sooners started with a Chris Ellison single to left to lead off the inning. After reliever Alex Frederick got a groundout and a strikeout, catcher Tyler Ogle doubled in the right-center gap to pull Oklahoma within 6-4. The Sooners would get no closer, as Frederick got Cody Reine to fly out to end the game.

Clemson improved its record to 45-23 overall and 2-0 in the College World Series for just the second time in its 12 appearances. The Sooners suffer their first loss of the tournament (1-1) and dropped their record to 50-17 on the season. The Sooners will face South Carolina on Thursday in an elimination game at 7:00 PM EDT, and Clemson sits just one win away from the Championship Series and will play on Friday at 9:00 PM EDT.