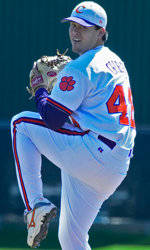 Clemson, ranked #6 in the nation, defeated Boston College 6-3 in front of 340 fans at Commander Shea Field on Friday afternoon. It was the first-ever meeting between the ACC schools. Clemson improved to 28-12 overall, 11-5 in ACC play. The Eagles fell to 19-19-1 overall, 4-15 in the ACC.

A pair of former Cape Cod League hurlers helped pitch the Tigers to victory on Friday. Josh Cribb (7-0), who played for the Brewster Whitecaps in 2004, pitched 7.0 innings, allowing seven hits, three runs (two earned), and three walks to earn the win. Daniel Moskos, a member of the 2005 Cotuit Ketleers, pitched 1.1 scoreless innings to pick up his seventh save of the year. Eagle starter Dan Houston (2-5) allowed four runs on five hits in 5.1 innings pitched, and suffered the loss.

Travis Storrer went 2-for-2 with a walk and sacrifice bunt to lead the Tigers, who had 10 hits. Marquez Smith added two hits and two RBIs, while Andy D’Alessio scored three runs. Clemson had four sacrifice bunts in the game.

The Tigers took a 1-0 lead in the second inning. D’Alessio led off with a bloop single to right field and Storrer followed with a walk. After Taylor Harbin’s sacrifice bunt moved the runners up a base, Smith singled through the left side on a 1-2 breaking pitch to plate D’Alessio.

In the fourth inning, D’Alessio led off with a walk and advanced to second on Storrer’s sacrifice bunt. Harbin followed with a groundball double down the third-base line to score D’Alessio.

The Eagles came right back and cut the Tiger lead in half in the bottom of the fourth. Jared McGuire led off with a single up the middle and Dave Preziosi followed with a single through the left side. After two unsuccessful bunt attempts by Shawn McGill, Preziosi tried to steal second on an 0-2 pitch, but McGuire stayed on second. Adrian Casanova threw to Harbin at second to easily retire Preziosi on the caught stealing. McGill then lined out to first for out #2, but Eric Campbell came through with a soft line-drive single to left field to score McGuire.

Clemson added two runs to its lead in the sixth inning. Tyler Colvin led off with a walk, but was retired on a fielder’s choice groundout by D’Alessio. Second-baseman Johnny Ayers misplayed the potential double-play ball, but still got the out at second. D’Alessio then stole second on a failed hit-and-run when McGill’s throw bounced past the bag and scored when Storrer lined a double into the wind in left field. Two batters later, Smith laced a two-out double over the head of McGuire in left field to score Storrer. McGuire broke in on the liner only to watch the ball go over is head.

Boston College loaded the bases with three-straight, two-out singles in the bottom of the sixth, but Cribb got Jett Ruiz to fly out to right field on a 3-2 pitch to keep the Tigers ahead 4-1.

Casanova led off the seventh by reaching on Campbell’s fielding error at third and went to second on Herman Demmink’s single up the middle. Brad Chalk moved the runners up on a sacrifice bunt and Colvin hit a chopper to Ayers, who made a diving stop and retired Colvin at first. However, Casanova scored on the play.

Ryne Reynoso led off the bottom of the seventh with a solo home run to center into a stiff wind, his third of the season. Pete Frates then reached on a fielding error by shortstop Stan Widmann and Ayers walked. Ryan Hutchinson moved the runners up on a sacrifice bunt. McGuire then hit a fly ball to right-center to score Frates on the sacrifice fly.

Clemson came right back and increased its lead to 6-3 in the eighth inning. Storrer led off with a bloop single to left and went to second on Smith’s groundout. With two outs, Widmann bounced a 3-2 pitch up the middle for a single to plate Storrer.

In the bottom of the ninth, pinch-hitter Ryan Akel led off with a single up the middle. Moskos came back from a 3-1 count to strike out Ayers and Hutchinson followed with a single to left-center. McGuire then hit a comebacker to Moskos, who threw to Harbin at second for out #2. Preziosi then grounded out to Moskos again to end the game.

Due to the threat of inclement weather on Sunday, Clemson and Boston College will conclude the three-game series with a doubleheader on Saturday starting at 11:00 AM. Both games will be nine-inning contests with approximately 30 minutes in between each game.