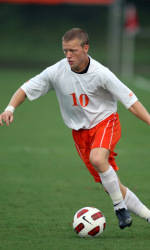 Dimas settled the ball down to the ground after a clearance by a Clemson defender. Dimas took a shot from 12 yards out. His attempt hit the right post, and ricochet into the net to give the Cavaliers the 1-0 advantage with 2:26 left in regulation. This was his first goal of the season.

The Tigers outshot Virginia 2-1 in the first half. With 18:40 left on the clock Nick Burton took a left-footed shot from 12 yards out that went wide left. Almost six minutes later Austin Savage sent an eight-yard shot towards the goal, but Virginia’s Diego Restrepo was there to make the save to keep the match scoreless.

In the beginning of the second half during the 54th minute, Tommy Drake played the ball to Riley Sumpter from the left side. Sumpter sent a pass to Burton that sprung him loose creating a one-on-one situation with the Cavaliers’ goalie Restrepo. Burton’s shot went over the goal and again the game remained scoreless.

Clemson’s last legitimate chance came with 6:19 left to go in regulation. Tommy Drake sent a pass to Matt Erasmus from the left side. Erasmus’ header went just over the goal.

“Soccer can be a cruel game,” said Clemson Head Coach Mike Noonan. “I couldn’t have asked more of the team than what the kids did tonight. I feel as if we were the better team. We limited them to one corner kick and four shots and after that kind of effort, you should come away with more. I thought we played hard and created more chances in the match. After a match like this, you should come away with more. Our play tonight gives an indication of what working hard and playing hard can do. Our team is composed of great young men that are very coachable. We had a great performance from everybody. Wednesday’s win over Furman gave us confidence.”

The Tigers will play at Charlotte on Tuesday, September 28, at 7:00 p.m. in the Tigers’ next action.