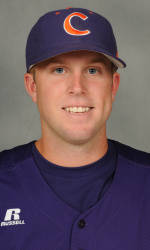 The #5 Clemson Tigers tallied 15 hits and scored in each of the first seven innings to cruise to a 15-4 victory over Cincinnati in the opening game of the second-annual First Pitch Invitational in front of 4,804 fans at Doug Kingsmore Stadium on Friday afternoon. The Tigers improved to 3-1 overall, while the Bearcats dropped to 1-3. It was the first meeting between the two teams since 1980 and the first meeting at Clemson since 1936.

The win was Jack Leggett’s 1,149th in his 32nd season as a head coach, moving him ahead of Jay Bergman into sole possession of 20th place in the all-time wins list by a head coach at a Division I school. He joins the top 20 with the late Bill Wilhelm, who is tied for 15th in all-time wins with 1,161 in 36 seasons, all at Clemson.

Junior righthander Scott Weismann (2-0) earned the win in a starting role. Weismann, who retired the first 10 Bearcats in the game, allowed three hits, two runs, and one walk with four strikeouts in 5.0 innings pitched. Addison Johnson, and Joseph Moorefield combined to allow one earned run in the final 4.0 innings pitched to close out the game.

The Tigers took the game’s first lead in the first inning. Chris Epps led off with a walk after being down in the count 0-2 and went to second on Brad Miller’s groundout to second. Jeff Schaus followed with a single up the middle to score Epps.

In the second inning, Will Lamb led off with an infield single off Mergen’s glove and advanced to third on Phil Pohl’s double down the left-field line. Lamb scored on a wild pitch and Pohl scored on Jason Stolz’s bloop single to center. After Epps walked again after being down in the count 0-2, Miller walked to load the bases. Stolz scored on a wild pitch and Miller scored when Schaus reached on a fielding error. Richie Shaffer then grounded into a 5-4-3 double play as Miller scored to give Clemson a 6-0 lead.

The Tigers kept the pressure on in the third inning. Pohl led off with a single to left-center, Stolz walked, and Epps lined a single to left field to load the bases. After the next two Tigers were retired, Shaffer was hit by a 1-2 pitch to bring home Pohl.

In the fourth inning, Spencer Kieboom and Lamb led off with walks. Two batters later, Stolz reached on a fielder’s choice when Lamb beat the throw to second on Stolz’s grounder to third. Two batters later with two outs and the bases loaded, Kieboom scored on a wild pitch and Lamb also scored on the play from second base when the catcher had trouble spotting the ball near the backstop.

The Bearcats dented the scoreboard in the top of the fifth inning. Jake Saylor led off with a single through the left side and moved to second on Matt Williams’ single off Miller’s glove. Two batters later, Nic Spence walked to load the bases, then Ronald Cotton was hit-by-pitch to score Saylor. Jake Proctor followed with a sacrifice fly to deep right-center to score Williams.

Clemson responded with a run in the bottom of the fifth inning. Shaffer drew a one-out walk and advanced to third on John Hinson’s single through the right side. After Hinson was caught stealing at second, Kieboom ripped a two-out single up the middle to score Shaffer.

The Tigers increased their lead to double-digits in the seventh inning. Shaffer and Hinson led off with walks, then Kieboom singled to left-center to load the bases. Pinch-hitter Joe Costigan followed with a walk in his first career plate appearance to score Shaffer, then McGibbon walked to score Hinson. Two batters later, Attanasio belted a single to deep right-center that scored Kieboom and Costigan, giving Clemson a 15-2 lead.

In the eighth inning, Proctor, Chris Peters, and Justin Glass led off with singles, then Justin Riddell grounded into a double play that scored Proctor.

The Bearcats scored a run in the ninth inning. Pinch-hitter Braden Kline led off with a double to center. Four batters later with two outs, Proctor reached on an error, allowing Kline to score from third base.

Kieboom had a game-high three hits, two runs, an RBI, and a walk to lead Clemson’s 15-hit attack. Attanasio, Miller, Hinson, and Pohl all added two hits apiece. A total of 17 Tigers made at least one plate appearance in the game.

Peters had a team-high two hits for Cincinnati, who had seven hits in the contest.

Clemson will play its second of three games in the First Pitch Invitational on Saturday at 1:00 PM against Charleston Southern at Doug Kingsmore Stadium.