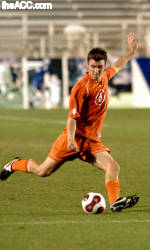 Among the players invited to New Orleans is Clemson’s Greg Eckhardt. Eckhardt is a rising junior at Clemson and is a native of Orange Park, FL. Eckhardt started all 18 matches last season and had one goal and two assists in 2007.

The team, made up entirely of collegiate players, will gather in New Orleans on Feb. 19 and play two games in a four-team event. On Saturday, Feb. 23 the U.S. will face the Honduras U-20 MNT, and on Sunday will face either the New Orleans Shell Shockers or Victoria, a youth team from Honduras. The two Saturday winners will match up on Sunday, while the losing teams will meet in a consolation match.

Four members of the 2007 U.S. Pan American Team will be in New Orleans as Daniel Cruz, Eckhardt, Warren Gross, and Peri Marosevic all traveled to Rio de Janeiro last summer.