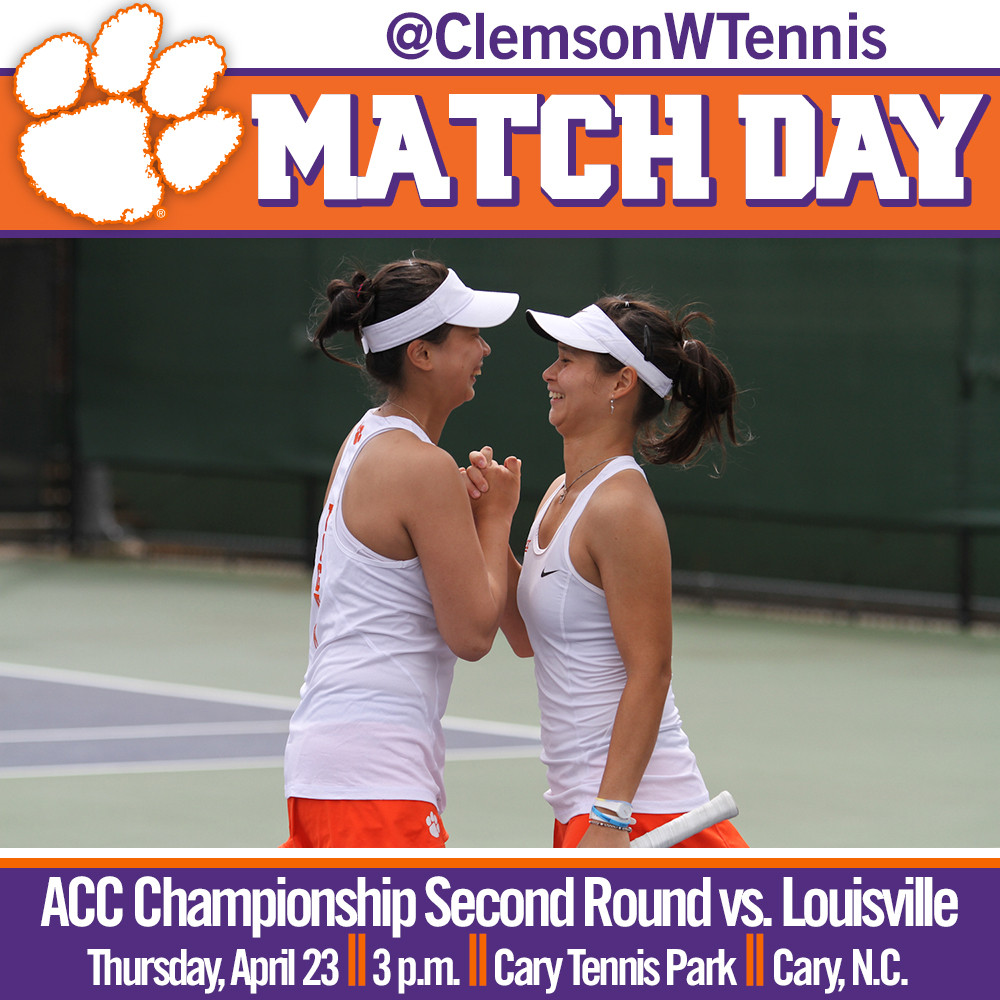 CARY, N.C. – The 21st-ranked Clemson women’s tennis team is the No. 5-seed in the 2015 ACC Championships, and, after receiving a first-round bye, faces No. 13-seed Louisville Thursday, April 23 in Cary, N.C. The match between the Tigers and Cardinals is set to begin at 3 p.m. at the Cary Tennis Park. Live updates and match coverage will be provided on Twitter and Instagram, @ClemsonWTennis, and periodic live results will be available on theACC.com.

The Tigers are 15-8 overall and concluded ACC regular season play with a 10-4 record, following a 5-0 victory over No. 33 Notre Dame on Friday, April 17. Earlier today, four Tigers were named to the 2015 All-ACC Women’s Tennis Team. Senior Romy Koelzer and junior Joana Eidukonyte were named to the all-conference first team, while seniors Beatrice Gumulya and Jessy Rompies were selected to the league’s second and third team, respectively. The All-ACC accolade was the third career honor for Gumulya and the second for Koelzer. Clemson’s four all-conference selections led all teams in the league in that category.

Clemson boasts three ranked singles players – Eidukonyte (13th), Koelzer (34th) and Gumulya (68th), and one ranked doubles team (Gumulya and Rompies – 4th). Eidukonyte has an impressive 31-6 singles record on the season, including an 18-3 mark in dual matches and a 12-2 ledger in conference play. She, Koelzer and Gumulya have each won nine of their last 10 singles matches. On Tuesday, Gumulya was named the ACC Player of the Week after her dominant singles and doubles performance versus the Irish. She currently has a team-best eight-match winning streak in singles.

Louisville is 12-16 overall and was 2-12 in ACC regular season play. The Cardinals defeated No. 12-seed Syracuse by a score of 4-3 in the first round of the tournament earlier today to advance to Thursday’s second-round contest against the Tigers. Louisville claimed the doubles point, and won three-set singles contests at No. 2, No. 4 and No. 6 to defeat Syracuse.

The two teams met once during the 2015 regular season, on March 7 in Clemson, and the Tigers came away with a 7-0 sweep, winning all six singles matches in straight sets. Thursday’s match will be just the second in series history between the two teams.