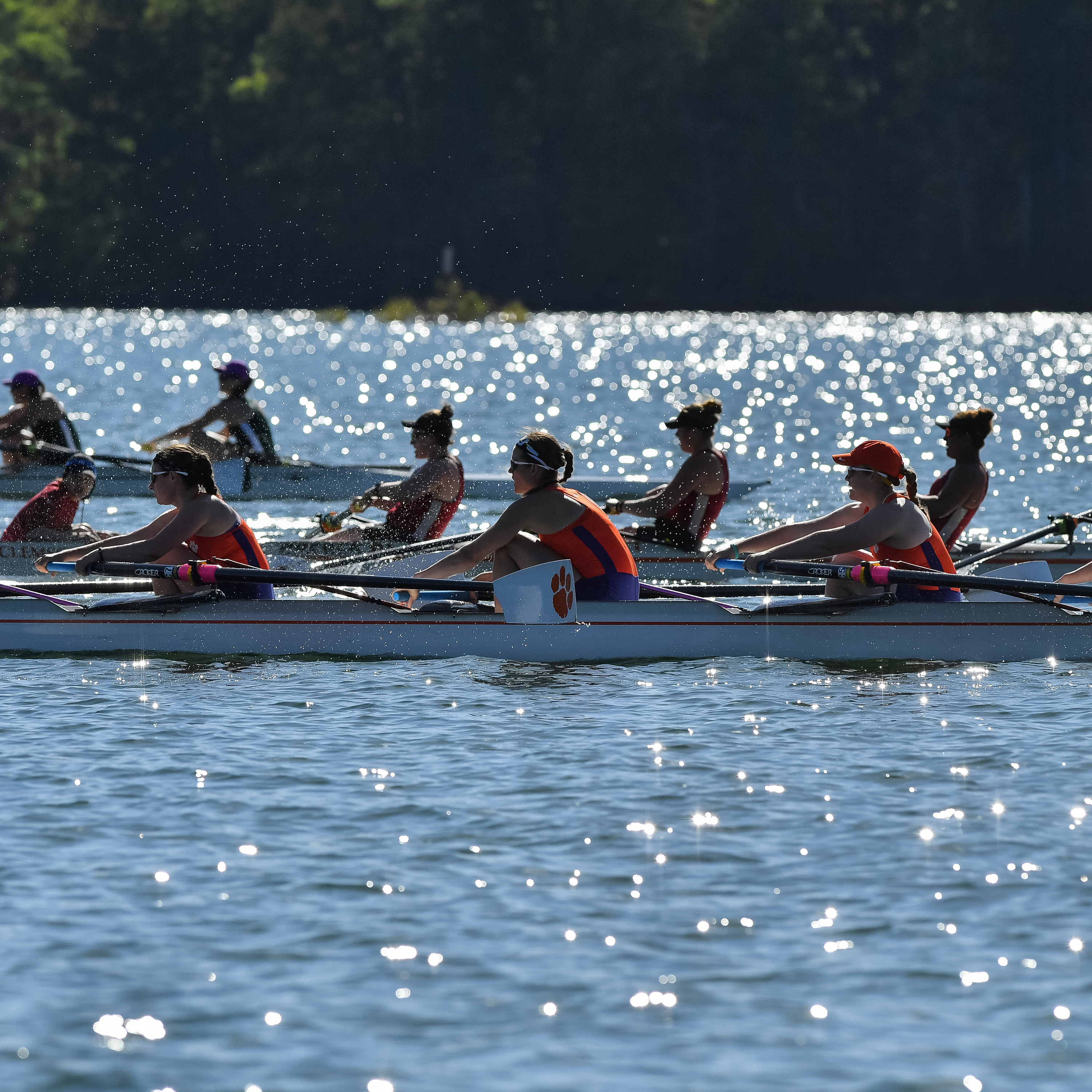 Stephen Frazier Wong has described his program’s training for the spring season as a combination of higher mileage at a tougher pace. For the sport of rowing, particularly 2,000-meter sprint races, the difference between first and last place is often only a few seconds.

The third-year Clemson coach has used the heavy training regimen this offseason to not only build toughness within his team, but also to bring out speed in his boats across the board.

“Rowing at its very essence is a training sport,” Frazier Wong said. “Our athletes will be the first to tell you, when we started out the spring semester, we were tired. It’s a high-intensity, highly competitive program. Because our training is progressive, each week builds off the next.”

Frazier Wong and his staff used the fall season, with three-mile head races symbolic of the intense training, as a competition for what can best be termed “mix and match” lineups. The intent was to create an even feel across the Tigers’ boat lineups, so that competition could be established on raceday.

“The fall is great for intrasquad competition,” noted Frazier Wong. “It was nice to see the student-athletes trusting the process. They showed they were not only able to go after each other in practice with the competitive fire you have to have each day, but also that they could hug each other at the end of the day knowing their best friends showed them how much they care by giving it their very best.”

One of the key ingredients to any team, but very much so in the sport of rowing, is the leadership that surfaces throughout a season. Frazier Wong said a couple of seniors have stepped up in that regard, Ashley Robinson and Lydia Hanewich.

Robinson, a two-time CRCA National Scholar Athlete who has already been accepted into the Syracuse University College of Law, has rowed with the Tigers’ First Varsity 8+ each of the past two seasons.

“Ashley is a great example of someone who gets it done athletically and academically,” explained Frazier Wong. “She really wanted to increase her performance, and she did that. One week after not doing as well on a test, she dropped 40 seconds on an erg score. She had the courage to share that struggle with her teammates, so that leadership has been really good to see.”

Hanewich was a National Strength & Conditioning All-American and rowed with the Second Varsity 8+ over the entirety of the 2015-16 season.

“Lydia is very focused, and does all of the work required the way it should be done,” said Frazier Wong. “She’s a quieter voice, but she leads through her actions. We’ve challenged her to find a leadership voice, and she’s been very inspiring to the other team members, and that will make a big difference.”

Hanewich and Robinson are part of a 10-member senior class that will once again welcome all sorts of top competition to Lake Hartwell this spring. The Clemson Invitational will take on a different feel, as a point system will be utilized for the first time to determine an overall team winner of the event held annually in April. Then, the Tigers will serve as the host institution for the ACC Championships on May 13 and 14. In between, Clemson has mixed up its travel schedule and will visit New Jersey to face Columbia and Princeton, while also traveling to California a week later in April.

Frazier Wong said it is a schedule that should give his program an even better idea of where it stands following the most intense training regimen to date under his watch.

“We are going against some great teams this season,” he said. “We’ll face some strong Pac-12 teams at the Natoma Invitational in California. We know that Columbia and Princeton will provide stiff competition as well. But as Coach (Dabo) Swinney often says about his football team, it’s not the W-H-O we face, it’s the H-O-W. It’s how we compete. Our success will depend on how we, as a team, have been able to work through a high level of mileage during our training.”

Frazier Wong’s coaching staff has two new additions in 2017. In addition to Caroline King, who works with the varsity rowers, Mandy Merritt came on board from West Virginia University as novice coach. Merritt won a Big Ten Championship at Ohio State in the Second Varsity 8+.

“Mandy has brought a great mix of discipline and fun,” Frazier Wong said. “She’s a great complement to our staff because of her personality and toughness.”

He also added a third assistant coach last month in Amanda Polk, a gold medalist for Team USA in the Women’s 8+ at the Rio Olympics. Polk, who helped Team USA to five additional World Championship titles, was a four-time All-American at the University of Notre Dame. Frazier Wong is excited to add someone of her caliber to the staff.

“We are fortunate to add someone with Amanda’s pedigree at Clemson,” he said. “Her experience at a prestigious academic institution like Notre Dame and as a professional athlete at the highest level give her pronounced credibility with our team. Having someone share an eight-year journey as a senior-level athlete with our rowers will certainly have a big impact.”