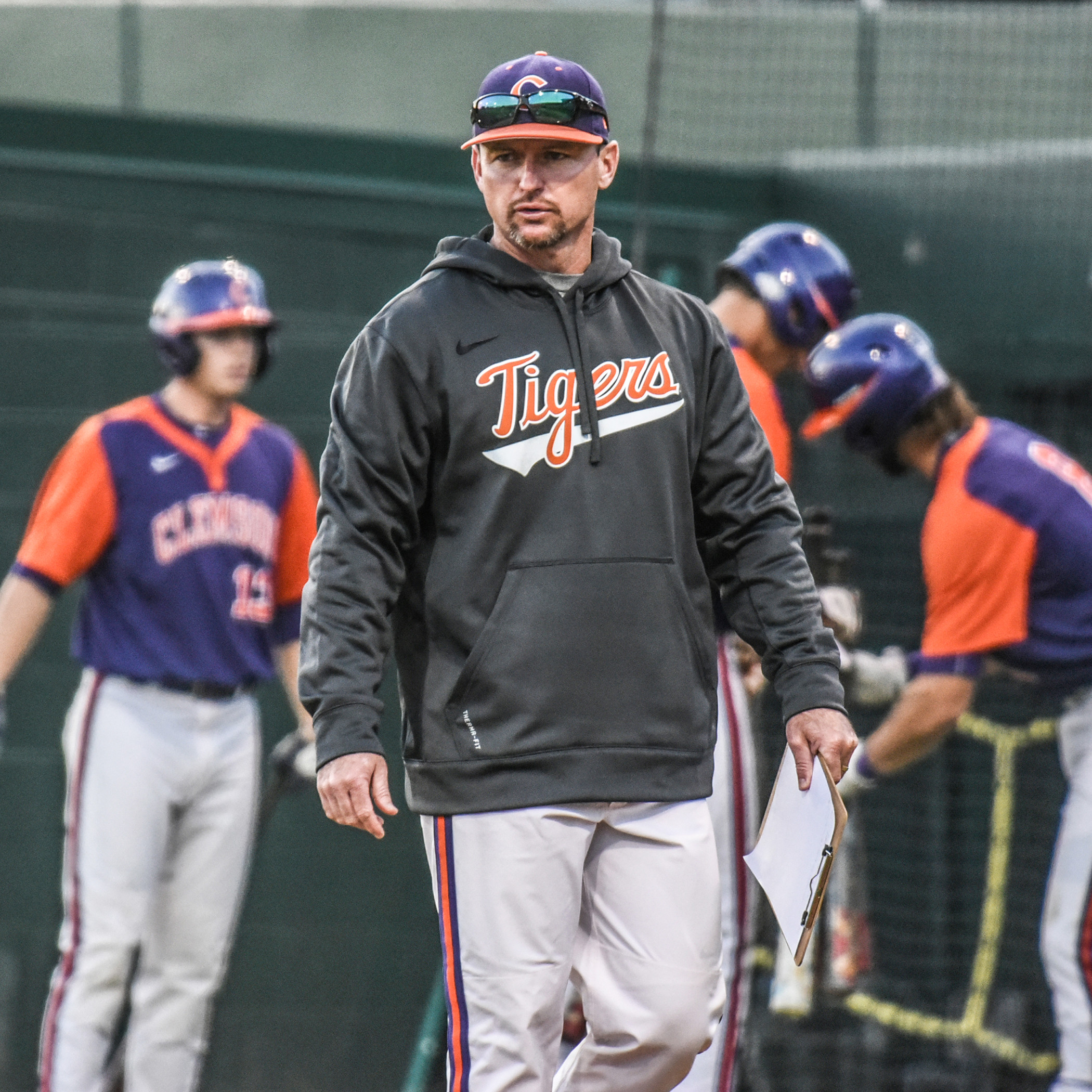 A new era in Clemson baseball begins in 2016 with the hiring of head coach Monte Lee in the offseason. Lee served as head coach at College of Charleston from 2009-15 and amassed a 276-145 record in seven seasons, including NCAA Tournament appearances each of the last two years.

“I’m extremely excited to be a part of this program, with all its rich history and tradition,” said Lee, a native of Lugoff, S.C. “I grew up watching baseball in this state and have followed the program for many years. It’s an honor to be the leader of one of the top programs in the country.”

The Tigers return many of their top hitters from 2015 and three All-ACC performers in the field. Assistant coach Bradley LeCroy, in his ninth season at Clemson, and first-year volunteer assistant coach Greg Starbuck, who served as an assistant at Elon the previous 17 seasons, will team up with Lee to coach the hitters and position players. Clemson batted .288 as a team in 2015 with a .376 on-base percentage and averaged 6.3 runs per contest, solid numbers the coaching staff can build upon.

“I have coached hitters for a long time and enjoyed coaching our tremendous group in the fall,” stated Lee. “My philosophy is for our hitters to be aggressive at the plate and take command of the batter-pitcher matchup.”

Assistant coach Andrew See, Duke’s pitching coach from 2013-15, holds the same responsibility in his first year in Tigertown and is assisted by first-year student coach David Kopp, who was a righthander at Clemson from 2005-07.

See and Kopp will instruct a young pitching staff with little returning experience. Of the 549.0 innings pitched in 2015, only 34 percent of those innings pitched by Tigers return in 2016. Clemson also must replace 2015 ACC Pitcher-of-the-Year Matthew Crownover, who was 10-3 with a 1.82 ERA in 109.0 innings pitched as the Friday starter.

“One thing the fans should expect from the team is that our guys are going to compete as hard as they possibly can, pitch by pitch, inning by inning and game by game,” stated Lee. “As long as we play as hard as we can for our fanbase, that is what they will see out of our team.”

The 2016 schedule features 31 home contests and games at Fluor Field in Greenville, S.C., against South Carolina and Furman. Clemson opens 2016 with a three-game series against Maine, the first of seven straight home games to start the season. After playing 19 of its next 29 games away from home, the Tigers have a 13-game homestand from April to May before playing six of their final seven games on the road.

“Our schedule is one of the toughest in the country,” added Lee. “We play in one of the most competitive leagues and also play a strong non-conference schedule. I’m looking forward to watching our players go up against some of the best teams in college baseball.”

A major upgrade came to fruition during the offseason with the addition of the state-of-the-art player facility at Doug Kingsmore Stadium. The three-story “game-changer” features a new locker room, lounge, auditorium and coaches office among many other amenities.

The unquestioned leader of the 2016 Tigers is junior catcher Chris Okey (Mount Dora, Fla.). He was a first-team All-American by NCBWA in 2015 thanks to hitting .315 with 16 doubles, 12 homers and 57 RBIs in starting all 61 games behind the plate. He later played for the USA Collegiate National Team for the second summer in a row. The 2016 preseason first-team All-American by Perfect Game also showed his defensive prowess a season ago by allowing just one passed ball in playing all but 15 innings behind the plate.

Sophomore Robert Jolly (Myrtle Beach, S.C.) is the other returning catcher with experience. As a freshman in 2015, he came on late in the season to become the primary DH. He batted .351 overall in 57 at-bats thanks to his ability to hit the ball to all fields.

Junior college transfer Chris Williams (Garden Grove, Calif.) has three years of eligibility remaining and impressed the coaches with his hitting ability in the fall. Williams was the conference MVP at Golden West College in 2015. The multi-talented player will also compete for the starting job at first base.

Freshman Stokes Brownlee (St. George, S.C.) was a three-sport standout at Dorchester Academy and will compete for innings behind the plate.

The leader of the infielders is junior Eli White (Easley, S.C.), who blossomed in 2015 to become one of the ACC’s best shortstops. He was the leadoff batter during the second half of the season and was drafted in the 37th round, but elected to return for his junior year. White earned Third-Team All-ACC honors in 2015 after hitting .297 with 44 runs and 11 steals. He also had a solid .966 fielding percentage in ACC regular-season games thanks in large part to his strong arm.

Junior Weston Wilson (High Point, N.C.) returns as one of the team’s top power hitters. As the starting third-baseman in 2015, he batted .251 with five homers and 26 RBIs. The highlight of his season game against rival South Carolina when he hit two homers in Clemson’s 11-4 victory on February 27. In 2016, Wilson is slated to move over to second base.

After playing sparingly as a freshman, sophomore Adam Renwick (Spartanburg, S.C.) took command of the starting spot at third base in the fall as one of the team’s best hitters. He only had 20 at-bats in 2015, seeing most of his action at second base.

Sophomore Glenn Batson (Greenville, S.C.) had just 73 at-bats in 2015, but showed his power potential with a key home run in a win at Virginia Tech. The two-time ACC Academic Honor Roll member will compete for innings at the corner infield positions.

Two freshmen, Grant Cox (Simpsonville, S.C.) and Jordan Greene (Fort Mill, S.C.), will also compete for innings in the infield. Cox, who was limited due to injury in the fall, will compete for a spot in the middle infield. He was rated as the No. 99 freshman in the nation in the preseason by Perfect Game. Greene is also a middle infielder who can also play in the outfield. He lettered four times at Charlotte Country Day School in North Carolina.

The outfield will see two or three new starters on opening day. Sophomore Reed Rohlman (Moore, S.C.) burst onto the scene in 2015 to earn third-team All-America honors as one of the best freshmen in the country. Rohlman led the team in batting average (.356), hits (84), doubles (17) and RBIs (58) as the left fielder. His role for the 2016 season is slated to be as a DH, outfielder and first-baseman.

Sophomore Chase Pinder (Poquoson, Va.) was the primary starter at second base in 2015 until his season ended in May due to a shoulder injury. With his speed, he will compete for the starting spot in center field. The All-ACC Academic selection batted .256 with three homers and 26 RBIs in 46 games in 2015.

Another sophomore, Drew Wharton (Suwanee, Ga.), is a leading contender to start at one of the corner outfield positions and first base. Wharton, one of the team’s top contributors off the bench in 2015, batted .281 overall, but was 6-for-12 (.500) in ACC regular-season games.

Junior Andrew Cox (Belton, S.C.) was the team’s predominant starter at first base in 2015. He showed his ability defensively at first base, but will also be utilized as an outfielder in 2016.

Mike Triller (Rutland, Vt.), who graduated December 17 with a degree in management, is a veteran outfielder who is one of the hardest-working players on the team. He is a career .250 hitter in 59 games.

Junior Maleeke Gibson (Sumter, S.C.) is another veteran who will compete for innings in the outfield. Gibson, one of the team’s fastest baserunners, has played 50 games over two active seasons.

K.J. Bryant (Taylors, S.C.) showed flashes of his potential during fall practice. The redshirt freshman will compete for a starting spot in the outfield in 2016.

Seth Beer (Suwanee, Ga.) joined the team in January as an early enrollee, Clemson’s first since Kyle Parker in 2008. Beer, who will compete for a starting outfield spot as a freshman along with playing first base, was rated as the No. 2 overall player in the nation by Perfect Game.

Clemson’s young pitching staff will rely on the most experienced returner, senior righty Clate Schmidt (Acworth, Ga.). He has pitched 173.2 innings in his career, 101.2 more more than any other returning Tiger, and will compete for a starting weekend spot. He was one of nine recipients of the Pete Frates/Tom Walter Award, given to inspirational figures, in January. He was diagnosed with nodular sclerosing Hodgkin’s lymphoma in May. After chemotherapy, he became cancer free in July.

Sophomore lefthander Charlie Barnes (Sumter, S.C.) had a 3.38 ERA with 23 strikeouts against only eight walks in 24.0 innings pitched over 12 appearances (two starts) in 2015. He will compete for a spot in the weekend rotation thanks to his ability to change speed and keep hitters off-balance.

Graduate righty Patrick Andrews (Hilton Head Island, S.C.) has battled devastating injuries the past two seasons, but is slated to regain his form from 2013 when he was one of the team’s best relievers. The hard thrower and team leader is a four-time ACC Academic Honor Roll member and will compete for innings out of the bullpen.

Junior lefty Alex Bostic (Matthews, N.C.) is the staff’s top prospect with his hard fastball and sharp breaking ball. He will compete for the closer role after pitching just 12.0 innings in 2015.

Paul Campbell (Malden, Mass.), a sophomore righthander, showed flashes of his potential in 2015 with one of the team’s hardest fastballs. He had 24 strikeouts against only nine walks as a freshman.

Junior lefthander Pat Krall (Downingtown, Pa.) was a dependable reliever in 2015. He had a 4.03 ERA in a team-high 27 appearances and added 38 strikeouts against only 11 walks.

Jackson Campana (Charlotte, N.C.) has been riddled with injuries, but looks to return to full strength in 2016. He has been primarily a righthander for the Tigers, but will see more time at first base with his power.

Junior righty Garrett Lovorn (Pendleton, S.C.) was a long reliever each of the last two seasons and will provide the same role in 2016.

Alex Schnell (Milton, Ga.) and Hunter Van Horn (Tampa, Fla.) are sophomore lefthanders who will compete for innings out of the bullpen. Schnell was 2-0 in 11 relief appearances in 2015 and earned the save against South Carolina on February 27. Van Horn pitched 7.1 innings over 10 relief appearances and had seven strikeouts in 2015.

Junior righthander Wales Toney (Anderson, S.C.) has seen limited action due to injury and did not pitch in 2015.

Alex Eubanks (Moore, S.C.) and Mike Goren (Westbury, N.Y.) are redshirt freshman righthanders who will add depth to the bullpen. Eubanks had a strong summer in the Coastal Plain League, while Goren was effective in limited action in the New England Collegiate Baseball League in 2015.

See has eight newcomers on the pitching staff, including 27th-round draft pick Jake Higginbotham (Hoschton, Ga.). The lefthander will compete for a starting role and is the No. 58 freshman in the nation by Perfect Game.

Another freshman, Brooks Crawford (Bishop, Ga.), will vie for a starting role on the mound. He was the AAA state player-of-the-year as a senior at Oconee County High School and also has the ability to hit for power.

Junior lefthander Andrew Towns (Nashville, Tenn.) will provide depth in the Tiger bullpen in 2016 after pitching at Walters State Community College the past two seasons.

Gilliam is the No. 94 freshman in the nation by Perfect Game and earned Cobb County Pitcher-of-the-Year honors as a junior at Kennesaw Mountain High School, where his high school teammate, Goodman, excelled. Koletic, Papp and Walker also had standout high school careers.