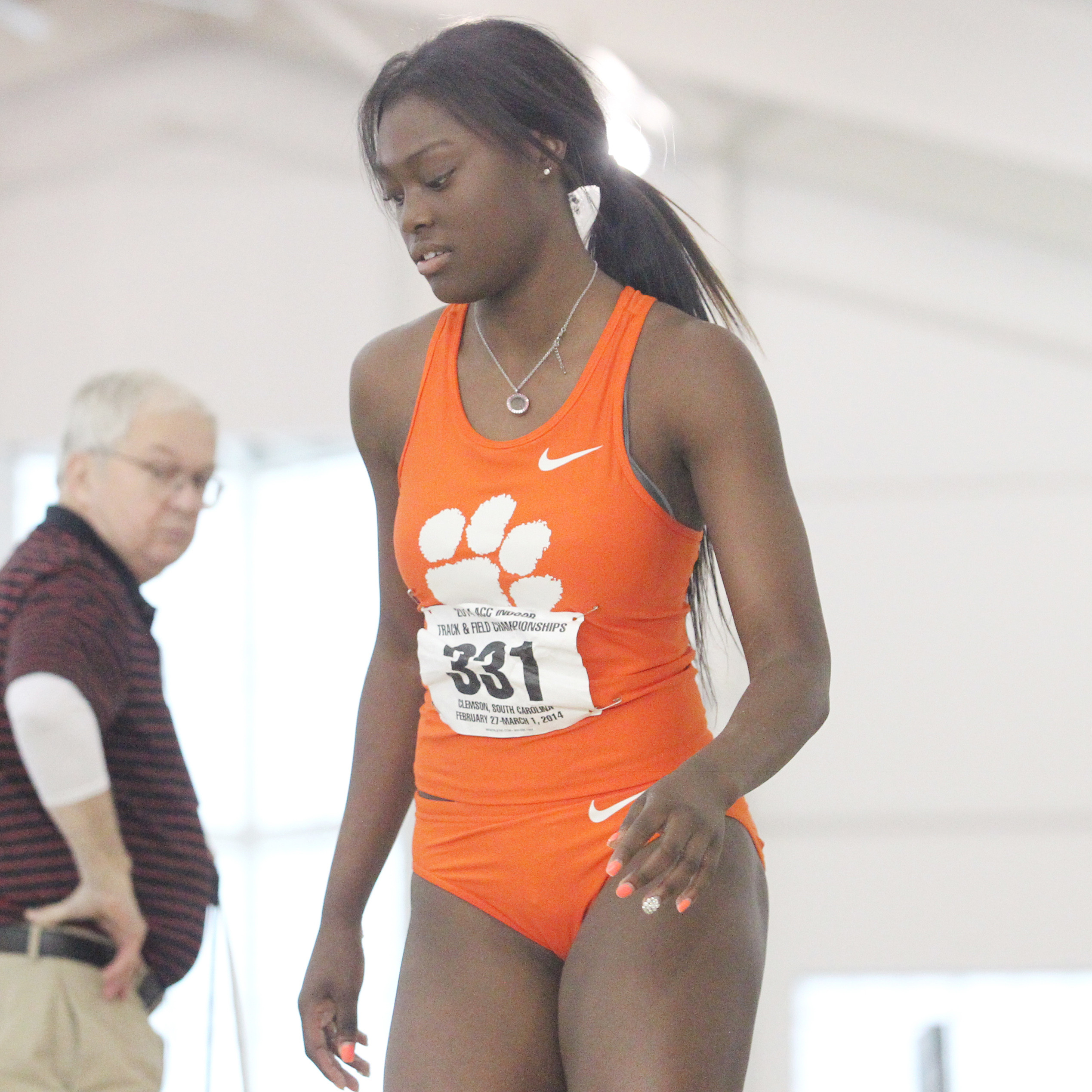 To the casual college track & field observer, the dramatic decline of Clemson’s women’s program from 2013 to 2014 may have come as a surprise. But take a comprehensive look at the two squads, and the differences were obvious.

The Tigers lost their top two student-athletes and several key contributors to transfer after the transition to new coach Mark Elliott. It had nothing to do with Elliott’s résumé or coaching style, but the personnel defections proved to be too much for a young team to overcome in 2014, despite the program’s recent success.

As Elliott turns the calendar to 2015, it’s hard for the second-year coach to contain his smile.

“With the proven athletes we’ve added, we believe they’ll help us get back to the level where our women’s team was prior to a year ago when we had all those departures,” he said. “We lacked in numbers and couldn’t represent all the disciplines that we have in track & field.”

No group has been impacted more in the past offseason than the sprints and hurdles. Clemson’s calling card during a four-year sweep of ACC Championships from 2010-13, the stable of talented athletes exponentially increased this summer. Elliott and his staff added transfers Samantha Elliott and Myasia Jacobs, both of whom are eligible right away. Then, the coaches signed an impressive crop of freshmen including Deja Parrish, Torie Robinson and Taylor Williams.

A native of Jamaica, Elliott comes to Clemson after graduating in three years at Division-II Johnson C. Smith University in Charlotte, N.C. There, she was a three-time individual NCAA champion in the hurdles. She won a pair of titles in the 400 hurdles and the 100 hurdles in 2014 with a lifetime best 13.05. Elliott will also be a mainstay of the Tigers’ relay teams.

“The head coach at Johnson C. Smith is a good friend of mine and one of Jamaica’s top hurdle coaches,” Elliott said. “Samantha wanted a change as it relates to her master’s degree and is a big-time addition for us.”

Jacobs was formerly a high school national champion out of New Jersey in the short sprints, and exhausted two indoor and outdoor seasons at the University of Georgia. Elliott was familiar with her prep background, and believes she is on her way back to a similar performance level.

Of the three freshmen sprinters, Parrish is perhaps best equipped to make an impact immediately. A native of Florida, she was a New Balance All-American and the state’s AA champion in the 400 dash in 2013.

“Olivia and Deja give us a good nucleus of sprinters that will have us ready to compete with the best in the country,” Elliott said. “Malayshia George, who was hurt early last season, also returns and is a talented runner.”

In the 800 meters, the Tigers welcome their biggest impact contributor in years in the form of Natoya Goule. After transferring from LSU to follow her coach, she sat out 2014 but is ready to run in 2015. Goule won both NCAA titles in the 800 in her lone season with the SEC Tigers. She will challenge Clemson’s records in the half-mile from the outset of her only season with the ACC Tigers.

“Tanisha was a good half-miler coming out of high school,” Elliott said. “Hopefully, this kind of work will help her reach the potential she seemed to be lacking where she was.”

Grace Barnett provides the biggest boost to the longer distance groups. Barnett redshirted the indoor season and competed primarily in the 1500 meters, finishing 16th out of 41 runners at the ACC Outdoor Championships.

“She will be a major factor for us this year,” Elliott said. “Compared to last year, she’s doing a lot better and looks like she can help us a great deal. She has been our consummate cross country leader in terms of place and performance.”

The Tigers return a wealth of riches in the jumps this season. Mimi Land, now a junior, is the headliner. She was the ACC’s Outdoor Most Valuable Field Performer in 2014 and earned all-conference accolades in both seasons in the high jump and triple jump. Her challenge will be to take her performances to the next level. She showed glimpses of that with a fifth-place effort in the high jump at the NCAA Indoor Championships.

She won’t be alone in the high jump this season, either. Sarah Maxson transferred in from the University of Illinois with two full seasons of eligibility remaining. Maxson cleared a personal best 5-10 last season and was the Big Ten’s silver medalist at the conference indoor meet.

“Sarah is a big addition for us and will be a great complement to Mimi,” Elliott said. “We have two good high jumpers, and Mimi can even fluctuate to the horizontal jumps as well. She’s one of those super athletes.”

The horizontal jumps are loaded. In addition to Land, the Tigers return Whitney Fountain for her final outdoor season as well as sophomores Iana Amsterdam and Anasterasia Terrell.

New to the triple jump in 2014, Fountain turned heads by qualifying for the NCAA East Prelims in just a week’s time of training. She also advanced to the NCAA Outdoor Championships in the long jump, where she was a second-team All-American. Fountain also possesses the ability to contribute in the short sprints, as evidenced by an all-conference showing in the 60 dash last season.

Amsterdam and Terrell flirted with the high hurdles last season, but both are expected to focus solely on the horizontal jumps as sophomores in 2015. Amsterdam successfully surpassed 41 feet in the triple jump during both indoor and outdoor as a freshman, and was a dependable scorer at the ACC level as well. Terrell’s best was 41-3.75 and she also contributed points toward the Tigers’ cause in the event.

Elliott likes what he’s seen out of the jumps, and he expects the unit to be even more formidable than it was in 2014.

“Instead of having just one athlete sporadically contributing in certain events, we can show some force in some areas this season,” he said. “Those two young sophomores are training very well. Last year they fluctuated their focus, but this year it’s really just going to be jumps for them. They have more time to focus on their primary events.”

Clemson’s thinnest unit remains the throws, but Danielle Borriello was recruited as a hammer thrower who the coaches hope will grow into a contributor during indoor season.

As he reflects on the 18 months he’s spent as Clemson’s head coach, Elliott believes the biggest difference is the number of student-athletes he has at his disposal heading into year two.

“It’s amazing,” he said, “I was out on the track last week and saw what must have been 70 or 80 athletes running around, instead of 50. It dawned on me that now we have a full team. And it’s not just the numbers, it’s people with strong performance levels that can make big-time additions to our expectations.”