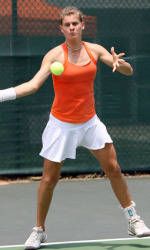 Among the Nation’s Elite

Clemson women’s tennis has established itself among the best women’s tennis programs in the nation, routinely finishing among the top teams with some of the NCAAs top players. The 2010 season looks to be no different, as Nancy Harris’ squad is locked and loaded to compete for a conference title, a major accomplishment in the mighty ACC, and to continue a streak of three consecutive Sweet Sixteen appearances in the NCAA Tournament.

The 2009 NCAA Champions hailed from the Atlantic Coast, and eight ACC teams are listed in the preseason rankings. The Tigers, who are ranked #14 in the first team poll, have earned bids in five of the past six Sweet Sixteens in the NCAA Tournament, have advanced to the Final Four twice in that period, and have advanced in the NCAA Tournament in each of the past eight seasons, a first for any Clemson women’s sport. Clemson is one of only ten teams nationally to advance to the Final Four more than once since 1988.

In 2008-09, Ani Mijacika was ranked #1 nationally for much of the season, while teammate Josipa Bek entered the top ten in singles as a freshman, giving the Tigers two players among the nation’s elite. With Mijacika’s decision to join the professional ranks, the onus has fallen on Bek to carry the Tigers in the top spot, but she is far from being the only threat in the lineup.

“At the top, its tough to replace the top player in the country, and I look to Josipa Bek to fill that role, but it is wide open for our players to take that spot,” says Head Coach Nancy Harris. “The energy she brings will be very important to our success.”

The Tigers return three All-Americans from the 2009 NCAA Championships. Bek earned honors after advancing to the Final 16 in singles and quarterfinals in doubles. She and Ina Hadziselimovic are coming off of a solid fall in doubles, and enter the spring season ranked fourth nationally. Additionally, Keri Wong earned All-America status as she teamed with Mijacika in doubles to form one of the nation’s top duos in 2009.

The Tigers appear primed to make a deep run in the tournament again with the mix of youth, skill, and experience up and down the lineup.

“The great thing is that the returners will be very strong,” explains Harris. “I’m looking for Keri, Ina, Laurianne, and Estefania to be very strong, solid players. I look for them to be anywhere in the middle and top of the lineup given their experience.”

Bek enters the 2010 season as the #9 ranked player in the nation, and the top-ranked player in the Carolina Region. She will likely hold down the top flight after posting a 34-10 record as freshman, the ninth-most wins in Clemson history. She played equally well in the fall, taking the Campbell/ITA Carolina Region singles championship on her way to an 11-4 mark with seven ranked victories.

Bek has earned a reputation throughout the conference as being a ferocious competitor and an animated player fueled by emotion. Mix that intensity with her work ethic and mental toughness, and opponents will struggle to take the flight-one singles point in any dual match.

“Josipa refuses to be beaten,” says Harris. “She runs down every ball, whether on her court, or two courts down. She brings such a great energy, and when the team gets tired, she is always there to pick them up, and bring a good energy. “

Freshman Nelly Ciolkowski had an exceptional fall, compiling a 7-1 record, winning her flight at the Furman Fall Classic, and advancing to the semifinals of the Carolina Region singles championship. Her only loss came to Bek in that semifinal match, and she posted wins over three ranked opponents. Her efforts in the fall earned her a #61 rank by the ITA to start the 2010 season, making her the second-highest ranked player on the roster. As the Tigers navigate the 2010 schedule, Ciolkowski will have ample opportunity to prove herself as one of the conference’s best players.

Ina Hadziselimovic enters the 2010 season ranked #113 in the ITA. A season ago, Hadziselimovic moved around the lineup, playing as high as flight two and as low as sixth. She gives the Tigers a strong, versatile option in several spots throughout the lineup. She also gives Clemson a measure of experience, as she is one of two seniors on the squad, having played in three NCAA Sweet Sixteens and Clemson’s 2008 ACC Championship run.

“Ina is very quiet, but there is a sense of trust that the girls have in her. If she talks, everyone listens. She always has something to add and contribute. “

Sophomore Keri Wong quietly had an exceptional freshman campaign, earning All-America honors in doubles, and posting a stout, 26-9 singles record in primarily the 4th and 5th spots in the lineup. She enters the season ranked #16 in the region, and can give Clemson a dangerous option anywhere from two to five in the lineup. The Jackson, Miss. native has all of the tools to win a championship and pick up her point against any opponent.

“Keri is very calm in competition, and her teammates know they can count on her for her point and they believe in her,” Harris adds. “She brings the sense of security and helps to set team standards.”

Senior Estefania Balda fought off a shoulder injury last season. She was tough as a doubles partner, posting a 20-7 mark, and in singles, will be used throughout the lineup. She is a veteran of 90 singles matches in her career and was ranked for much of the season in 2009, reaching as high as 76th and finishing the season ranked #115. She has consistently seen the top 100 in each of her three seasons, and has had many winning experiences with the team and as an individual.

Laurianne Henry is a former five-star blue chip recruit from Anderson, S.C. The junior has put together a solid career so far, earning a national ranking late last season, and taking care of business by winning in the ACC tournament and the NCAAs, scoring the clinching point against Winthrop.

Henry won 72.0% of her matches as a freshman, and has an 8-2 record in ACC dual matches in her career. She ascended as high as 92nd in the rankings as a sophomore, when her play was limited due to injury.

“Laurianne is hitting the ball terrific coming off of injury, as is Estefania Balda, both of whom we missed at the end of last season due to injury,” said Harris. “They are both back to where they were health-wise, and we will have the opportunity to see them compete at their peak levels.”

Caroline Magnusson is another freshman who saw some action in the fall. She will be limited in the spring, but will be able to help depth-wise down the ACC stretch. The Bjarred, Sweden native is primed for difficult competition and will be able to contribute as a tough matchup for many opponents.

The Tigers will try and build off of a stellar 2009 season in which Clemson recorded the ever-important doubles point in 21 of 27 matches. This year, Ina Hadziselimovic and Josipa Bek highlight the lineup, earning the #4 national ranking by the ITA. They advanced to the Final Eight a season ago, mowing through several top opponents on their way to All-America honors.

Hadziselimovic set a junior class record with 30 doubles victories for the season, against only 11 losses in 2009. She has a career doubles record of 80-43, and has won at least 25 matches in each of the past two seasons. She and Bek reached as high as 24th before the Tournament, finishing the season ranked 11th after their Elite Eight run. In the fall, the duo teamed up to go 10-5 and reached the finals of the Carolina Regional. They were ranked 14th for the fall period, but dispatched several ranked opponents on their way to the elite top-five ranking. It gives the Tigers a top-five ranking in doubles for each of the past four seasons.

Ani Mijacika to form a top-ten ranked doubles group. Wong was 27-8 (.771) overall and gives the Tigers a high-level option to work with.

Ciolkowski, the nation’s 61st-ranked singles player, could fill the other spot, but there are a host of Tigers who will fight for the slots. Balda has a career 54-27 doubles mark, winning 20 and 21 matches in each of the past two seasons. Henry can also play, having won five of her seven matches last season. Any combination of these players is possible, and each give Clemson a unique chance and strength of winning.

Nancy Harris has never shied away from a difficult schedule, and 2009 will be no different. The ACC will again be loaded, and Clemson will play eight preseason top-25 schools, and a total of 16 schools ranked in the top 75. Clemson will also host the ITA Kickoff weekend as a precursor to the ITA National Team Indoor Championships. Clemson will welcome # Illinois, #21 Mississippi, and #33 Illinois, and #37 Texas A&M for that tournament, and will also play dual matches with several tough opponents, including #4 Georgia and #17 South Carolina in the nonconference slate.

“The difficult part is that a tough schedule is rigorous on your athletes. My first goal was to make us a perennial top ten program, and we’ve knocked on the door. My goal is to move firmly into that part an eventually become a perennial top five. We are capable in terms of our facilities, our weather, in recruiting, and in terms of having the strength and depth to be with the nation’s top teams. You have to have a minimum of six healthy players to reach that championship. The season is a gauntlet, and that comes back to the support system.”

Tiger fans will be treated to another of Harris’ elite group of women’s tennis players. Clemson women’s tennis has established itself among the top teams in one of the top conferences nationally, and will again push for national accolades. Josipa Bek gives the Tigers a great chance every match at the top, and can help take the program to the NCAA Tournament and beyond.

“You will see talent that you wouldn’t be able to see but in a few places in the US. If you come out and sit and pick an individual and follow that match for one set, I think that you will come away with the idea and enthusiasm for tennis. We have an excellent turnout on the courts from students. Because we are in the shadows of the major sports, people don’t always realize that the level of tennis here is the level of play that you see at the US Open three years later.”

The 2010 edition has excellent talent in and every class will be represented in the lineup, giving Harris a variety of options competitively and strategically to help build winning experiences in all aspects of the game.