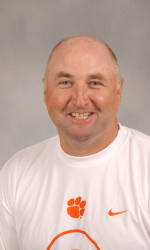 Clemson plays two exhibition matches in the month of August, Alabama-Birmingham at Clemson on the 17th and Winthrop in Rock Hill, SC on the 24th.

The Tigers will open the regular season at South Carolina in Columbia, SC on Friday, August 29. The first home match will be on Monday, September 1, as the Tigers play host to Georgia State. After home matches with Georgia Southern on September 5, and Radford on September 7, Clemson will play at Wake Forest for the first ACC match of the season.

The Tigers will finished the regular season with home matches with Gardner Webb on November 4, and USC Upstate on November 7.

Clemson will play in the ACC Tournament on November 11-16 at Cary, NC.

“Again we have a very challenging schedule both in conference and out,” said Clemson Head Coach Trevor Adair. “We are looking forward to the fall season after having made a lot of progress through the spring with this talented young team.”

Adair will be entering his 14th season at Clemson. During this time, Clemson has advanced to the NCAA Final Eight five times and the Final Four in 2005.