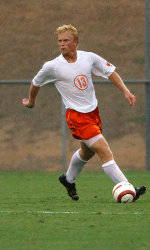 David Bell had two goals and two assists for six points his senior season in 2007. He is an electrical engineering major from Athens, GA.

Greg Eckhardt started all 19 matches for the Tigers as a defender. He had one goal and two assists for four points. Eckhardt is a sophomore from Orange Park, FL.

David Newton played in 18 matches and had two goals and two assists for six points from his defender position. He is a sophomore from Mount Pleasant, SC.