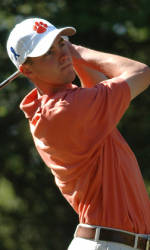 Clemson has another challenging golf schedule that includes two new tournaments and the return of two others that have not been on the schedule for many years. The Tigers will play 10 regular season tournaments prior to what would be a 27th consecutive NCAA tournament bid. All 10 events are three-day, 54-hole tournaments, meaning Clemson will only play 36 holes in one day of the weather dictates a change in schedule.

The Tigers open play in Japan at the Topy Cup, an event Clemson last played in 2003 the year it won the NCAA Championship. Clemson won the Topy Cup that season to get the national championship campaign off to a great start. Overall it will be Clemson’s fourth trip to Japan for the Topy Cup.

Clemson will return to the mainland for its next tournament when the Tigers head to The Farm in Dalton, GA for the Carpet Capital Classic. Clemson is a fourth-time champion of the event since it first appeared in 1988-89. The Tigers finished second at this tournament last year in its top performance of the fall.

A new tournament appears on the Clemson schedule in October as Clemson will travel to Macon, GA for The Brickyard Invitational. Many of the top teams in the area, will compete. Clemson then closes the fall schedule at Windermere, FL at the Isleworth Collegiate. This is one of the top college tournaments of the year, as 12 of the top 25 teams in the nation are expected to compete. It will be a home tournament for Clemson sophomore Sam Saunders, a Windermere, FL native who finished 10th at this event last year.

Clemson will return to action at the Puerto Rico Classic on the final day of February, the latest start to the spring season since 1992. This will be the 16th straight year Clemson has competed in Puerto Rico. The Tigers won the tournament in 1999 and have finished second five other years, including last season.

Clemson will play in the first Linger Longer Invitational at Reynolds Plantation March 14-16. It is the start of four tournaments in 24 days for the Tigers. Georgia and Georgia Tech are expected to be among the teams in the field.

Senior Tanner Ervin will play on his home course when the Tigers tee it up at The Hootie at Bulls Bay in Mount Pleasant, SC on March 23-25. It will be Clemson’s third appearance in the event, the first since March of 2006.

Clemson returns to the Furman Invitational for the first time since 1996-97 on March 28-30. The last time Clemson played at Furman, Jonathan Byrd was a freshman on the Clemson team and Byrd’s brother, current Tiger assistant coach Jordan Byrd was a player for Furman. They finished that event with the exact same score. Clemson has won the Furman Invitational four times previously.

Clemson will play the Augusta State Invitational April 4-6, the weekend prior to the Masters. It will be Clemson’s seventh straight appearance at that event. The regular season ends at the ACC Tournament at The Old North State Course in Uwharrie Point, NC. It will be the seventh straight year the tournament has been held at The Old North State Club.

NCAA Regional bids will be extended in early May and the tournament will begin May 15 at three regional sites. The NCAA East Regional will be held at Council Fire Golf Club in Chattanooga, TN.