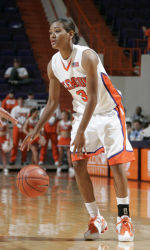 New Head Coach Cristy McKinney is excited about her first season at the helm of the Lady Tiger basketball program. With 12 returning letterwinners, she takes over an experienced team with no shortages of depth, size or talent.

McKinney comes to Clemson after 12 years leading the Rice Owls. She left as the program’s winningest coach and guided the team to an NCAA berth a year ago, her second in five years. Her Owls captured a share of the Western Athletic Conference regular season title and the WAC Tournament crown last season.

The 2005 WAC Coach-of-the-Year prefers to play an athletic, up-tempo style of basketball and feels this year’s team can handle and succeed in her system, offensively and defensively.

“We are athletic and we are deep, so we should be able to push the basketball,” she said.

McKinney hopes to score a lot of points in transition, but the team’s make-up allows it to have various offensive sets in the half-court game as well. Also expect half-court sets to try and take advantage of individual strengths on the team. The Lady Tigers must utilize Amanda Frist’s ability to score in the low block, one-on-one. Khaili Sanders’ and Maxienne White’s versatility as power forwards must also be exploited. They can be effective in the paint but also on the perimeter.

The offense also needs to take advantage of perimeter strengths. It needs to provide lanes for slashers such as D’Lesha Lloyd and Tasha Taylor and spot up opportunities for shooters Carrie Whitehurst and Susan Yenser. Julie Talley and Tasha Phillips have the ability to shoot or attack the ball.

On the other side of the ball, expect the Lady Tigers to play plenty of man-to-man defense.

“Defensively, I love to get after people,” McKinney explained. “We have the quickness, the athleticism and the depth to pressure the ball. We’ll mix in a little zone and half-court traps when we need to, but we will hopefully be a really solid man-to-man team.”

POST PLAYERS Along with Frist, Sanders, and White, Lauren Allen, Adrianne Bradshaw and Moreemi Davis return to give the Lady Tigers depth and size at the post positions. Frist, a 6-4 native of Fountain Inn, SC, is a three-year starter who looks to close out her career with a stellar senior season after averaging 7.7 points and 6.2 rebounds per game last year.

“Amanda had a really, really good freshman year here and has been solid the last two years,” commented McKinney. “We would like to see her have a great senior year.”

Sanders and Allen are also entering their final year of Lady Tiger basketball and McKinney has high expectations for them both.

“Lauren is a good athlete and is a very versatile player, as she can play the four or the five position for us,” she said. “Khaili Sanders is one of the most talented players I’ve seen. She will probably play the power forward position, but she could also play center for us.”

McKinney touted Sanders’ ability to take the ball inside and post up her defender. With more playing time expected this season, Sanders hopes to improve her statistics and record more performances similar to the Jan. 17, 2005 contest against Wake Forest. Sanders scored 17 points on 7-10 shooting that night.

Bradshaw, a native of Greensboro, NC, and Davis will also see action at the post for Clemson in just their second year with the program. McKinney compliments Bradshaw’s improvement as the 2004-05 season progressed and plans to use her talent more this season.

“Moreemi posts well and uses her body well,” described McKinney of the 6′-3″ Davis.

Rounding out the inside is the red-shirt sophomore White. White started eight games for the Lady Tigers last year, averaging 4.3 points and 3.4 rebounds.

White, who is left-handed, is another athletic option for McKinney at the four position.

PERIMETER PLAYERS McKinney will also have an abundance of players to use at her discretion on the perimeter. However, sophomore Tasha Taylor is the only true point guard on the team who is healthy enough to begin the season.

Taylor handled the point responsibilities late in the season last year and tallied 83 assists and 24 steals in the process. She will quarterback this year’s offense.

Behind her, senior Julie Talley will see minutes at the point as well as at the two-guard position. The 5′-6″ Talley has started 42 games over the last three years and is a threat to score on the outside. Her 94 career three-pointers made already rank her among the best in school history, and she boasts a career .363 three-point shooting percentage.

Freshman Christy Brown is another true point guard for Clemson who could back up Taylor in the second half of the season. The 5-6 native of Atlanta, GA has surgery on a torn ACL over the summer and the coaches are unsure if she will be ready to play this season. McKinney also lost guard Reggie Maddox, the team’s leading scorer from a year ago, due to academic reasons.

In McKinney’s system, the two and three positions have similar qualities and five players will vie for playing time in the two spots this year. Talley is a more natural two-guard and will see most of her time at that position.

Fellow senior Tasha Phillips is entering just her second year in the Clemson program after transferring from Gulf Coast Community College. McKinney will rely on her scoring abilities from behind the three-point line to aid the Lady Tigers this season.

“Tasha can shoot the basketball,” she said. “Hopefully, she can really help us improve our percentages from last year.”

D’Lesha Lloyd is an extremely talented sophomore who figures to see minutes at the three position with her size, standing at six feet tall. She averaged 8.6 points and 3.9 rebounds for Clemson in her freshman campaign.

The only junior on the team, Carrie Whitehurst, has the ability to play both the two and the three positions for the Lady Tigers. Her six-foot frame will often give her a height advantage over her defender. The sister of Clemson quarterback Charlie Whitehurst is the team’s best pure shooter.

Susan Yenser, a rookie from Marietta, GA will also likely earn playing time this season on the perimeter.

“She understands and has a good feel for the game,” McKinney said. “She had a good summer just playing pickup and is a really good shooter.”

Schedule The Lady Tigers’ 2005-06 schedule will kick off at the fourth annual WBCA/BTI Classic in Tempe, AZ from Nov. 11-12. Clemson will face Missouri on Friday night and will play either host Arizona State or Vanderbilt on Saturday.

Clemson will play host to Tennessee Tech in its home opener on Nov. 18.

“Tennessee Tech is a very solid program,” McKinney said. “They consistently play teams tough, so we’re going to have to be ready to play that night.”

Overall, McKinney thinks that the nonconference has balance. “We face some good teams, but then there are some games that hopefully we can win, where we can work on some things and build confidence.”

The Lady Tigers will face eight teams at Littlejohn Coliseum before the ACC season begins and also will travel to Furman and Georgetown in the first half of the season. Along with the opening tournament, Clemson also will participate in the Memphis Lady Tiger Classic over the Thanksgiving weekend. The event’s field also includes Belmont and Austin Peay.

UCLA highlights the home nonconference schedule arriving in Clemson for the first time in history on Dec. 3 and the Lady Tiger’s new head coach is looking forward to the visit.

“With UCLA coming here, it gives us a chance to compete against a quality opponent on our home,” she said.

The team concludes the nonconference schedule against in-state rival South Carolina on Jan. 2 before facing North Carolina in Chapel Hill on Jan. 9 in the first ACC contest.

The Lady Tigers will play 14 games in the always-tough ACC this season, playing home-and-home contests against Georgia Tech, Florida State and Wake Forest. Clemson will face Virginia Tech, Maryland and Virginia on the road this year and will play host to Miami, newcomer Boston College and perennial powerhouse Duke at Littlejohn Coliseum.

Feb. 16’s contest against NC State in Clemson will mark the first meeting between McKinney and former coach Kay Yow. McKinney played for the Wolfpack coach from 1976-79, scoring 1,359 points and accumulating more than 600 rebounds over her career.

The Lady Tigers expect to improve upon their conference record from a season ago and play competitive basketball in one of the best leagues in the country.

“There’s not a lot of difference between the top teams in the conference and the next tier,” McKinney said. “We just want to get ourselves into that next level and be very competitive. We know we have to be ready to play every night to accomplish that goal.”

McKinney hopes that her strategies and game plans will prove to be as successful in Tigertown as they were at Rice and that her first season guiding the Lady Tigers will bring improvement and consistency to an already deep and talented team.