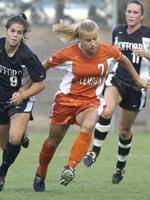 With nine starters and 18 letter-winners returning, the Lady Tigers look to have another successful season this fall. This is the 11th season of Clemson women’s soccer and the previous 10 have all ended with a bid to the NCAA Tournament and a top 20 final ranking by at least one poll, pretty impressive numbers from a consistency standpoint. The outlook to continue both streaks is encouraging.

“With our entire team returning largely intact from last fall, coupled with our recruiting class, it is easy to get excited about the upcoming season,” said Head Coach Todd Bramble, who is entering his fourth year as head coach of the Lady Tiger program.

“However, when you look at the other teams in the ACC and with the schedule we have set, it will prove to be another highly challenging season.” Clemson had an excellent year on the recruiting front, bringing in six players.

“I feel this group will stack up with any recruiting class in the country,” said Bramble. “Not only have we addressed our needs, but also we have added an amazing amount of talent to our squad. This class will undoubtedly leave its mark on Clemson Soccer history and we can’t wait until we have them all here in Tigertown!”

With this said the only inexperienced position will be at goalkeeper, but recruiting may have this problem solved. The Lady Tigers have everyone back on defense, and on the offensive side Clemson has two freshmen who had great years in scoring, as Courtney Foster and Kelley Schnieder were pleasant surprises as prolific scorers during their freshmen seasons. One of Clemson’s all-time leading scorers, Lindsay Browne is also back after red-shirting last season.

Allison Graham, Paige Ledford and Lydia Vandenbergh should anchor the midfield. Clemson did not graduate any starters from the back line, however, there will be a newcomer in goal again this year.

Goalkeepers Clemson added two players to this position as Ashley Phillips and Lauren Johnston are both freshman. Clemson lost starting goalkeeper Lauren Whitt, who started 19 matches and finished the season with a 0.91 GAA and had 63 saves.

Johnston, a native of Denver, CO, played for the Colorado Rush Soccer Club. She participated in the Olympic Development Program (ODP) Regional Camp in 2000, 2001 and 2002. She was also a member of the ODP state team for several seasons. Johnston has played varsity soccer for Denver East High School and was named all-city. She won the Golden Glove Award and was a Region IV ODP Champion.

Backs The defenders will be a veteran group, as Clemson features all four starters returning in the back. Sarah Turner, Kate Clifton, Kristen Allen and Jenny Anderson are all seniors solidifying this area in terms of experience.

Clemson added freshman Logan Hull to the back. Hull is from Lakewood, CO, where she played at Green Mountain High School. The defender also plays for the Colorado Rush club team.

The Tigers lost Allison Mitchell due to graduation. Mitchell who started all 20 matches last season finished the year with two assists. She was honored by the ACC by winning the Weaver-James, Corrigan Post-Graduate Scholarship.

The Lady Tigers added Lou Hudson and Elizabeth Jobe to the midfield corp. Hudson is from Mount Pleasant, SC. The midfielder played for the club team, Mount Pleasant Ice. Her club team won five state championships and advanced to the Region III finals on two occasions. She is a member of the South Carolina State ODP team. She has been named all-state and was named a NSCAA High School Scholar All-American. Her father Billy Hudson played football for Clemson.

Forward Clemson was young up front last year, but the freshmen stepped up and produced offense for the Tigers. Courtney Foster, a sophomore, led the team in scoring with 13 goals and five assists for 31 points. She also had five game winners for the Lady Tigers, best on the team as was a second-team All-ACC. Kelly Schneider started 14 matches for the Lady Tigers and finished the season with five goals and two assists for 12 points. She had four game winning goals for Clemson last season.

Clemson added freshman Jacquelyn Hines from nearby Seneca, SC at forward. She has been a member of the Alabama State Olympic Development Program ODP team and South Carolina State ODP. She is also a Region III Pool player and played for the Greenville Futbol Club.