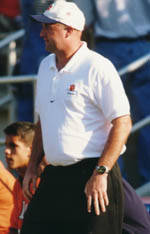 Adair who is entering his ninth season at Clemson has compiled a 149-68-18 record at the school. He has led Clemson to four NCAA Final Eight Appearances. He has also guided the Tigers to two ACC Championships in 1998 and 2001.

On Sunday, September 14, Clemson will open its ACC schedule with a home match vs. Duke. The Tigers will play host to the Clemson Invitational on September 26 & 28 and will play Air Force and Coastal Carolina. Clemson will meet South Carolina on Sunday, October 5 at Riggs Field.