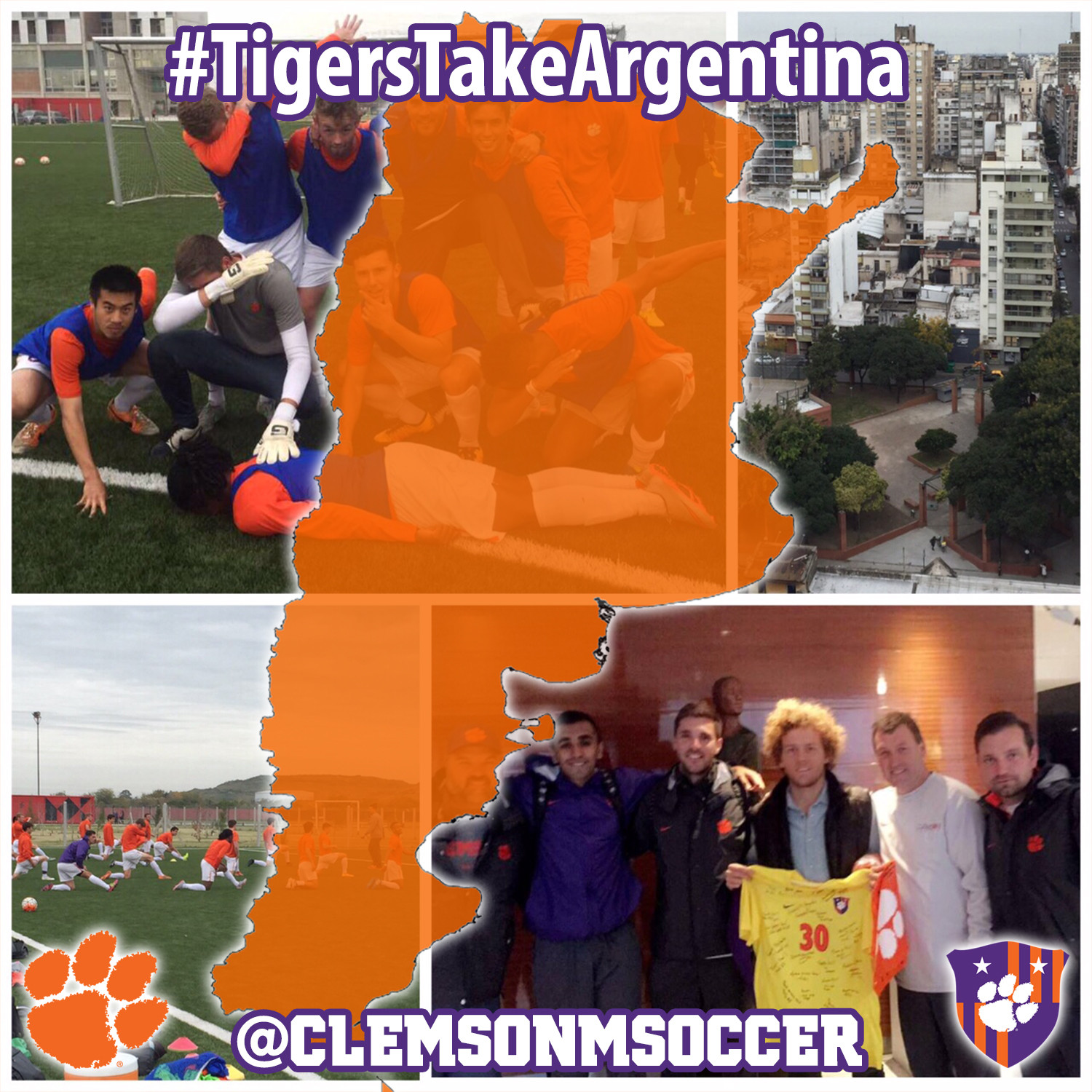 First on our agenda for this morning was saying goodbye to Paul, who has been our host/tour guide since we arrived in Argentina. Paul hosts teams in Buenos Aires, so, although he accompanied us to Rosario yesterday, he had to head back home today. The entire team and staff gathered in the hotel lobby where co-captain Austen Burnikel, on behalf of the group, thanked Paul with a heartfelt speech and presented him with one of our jerseys and some other Clemson items to remember us by. We’re so grateful for Paul and all he did for us on our trip, and we’ll miss him a lot. Fortunately, he has left us in the capable hands of our Rosario host, “Nacho.”

Next, we boarded the bus to head to training, which was at the facility of Newell’s Old Boys. When we arrived at our practice field, we were told that the Newell’s Old Boys’ first team was actually training on the field adjacent to ours. It was pretty neat to be training right next to a team that plays in Argentina’s Primera Division.

Today’s session was fairly light after yesterday’s very physical match, and also given that we have another match tomorrow. We also played a few games, including horseshoe (think of a cross between horseshoes and cornhole), which was won by Alex Happi and Aaron Jones. Of course we played one-touch, and today’s three teams were made up of 1) international players, 2) players from South Carolina and 3) non-South Carolina Americans. The non-South Carolina American team, made up of Tanner Dieterich, Johnny Heckman, Mauriq Hill (Mauriq’s from Bermuda, but we needed a couple of players from the international team to switch sides due to numbers), Trey Langlois, Michael Melvin, Phillip Tran and Michael Zierhoffer, won the game. Assistant Coach Liam Curran, though not on the winning team, did manage to score, maintaining his impressive 1.0 one-touch goals per game average for the trip.

We had downtime this afternoon. As we have mentioned before, many of our players are taking summer school classes, which are going on now back in Clemson, so they used the time to study and work on homework. Aaron Jones and Oliver Shannon discovered that there was a good price for massages in the spa in our hotel, so they treated themselves. After all, it was a recovery day! We have a few Liverpool fans in our group, so some of us watched the game on the big screen in our team’s video/meeting room. Unfortunately, the good guys did not win, as Liverpool lost to Sevilla 3-1 in the UEFA Europa League Final.

A few of the guys did some exploring around the city of Rosario. It’s a much smaller city than Buenos Aires, and there are several pretty churches and an interesting flag monument. We’ll have an opportunity to see a lot more of the city and learn about the historic sites when we go on our city tour later this week.

Tonight, we had dinner in the hotel and a meeting/film session, as we play our fourth match of the trip tomorrow morning, against a team from Newell’s Old Boys.