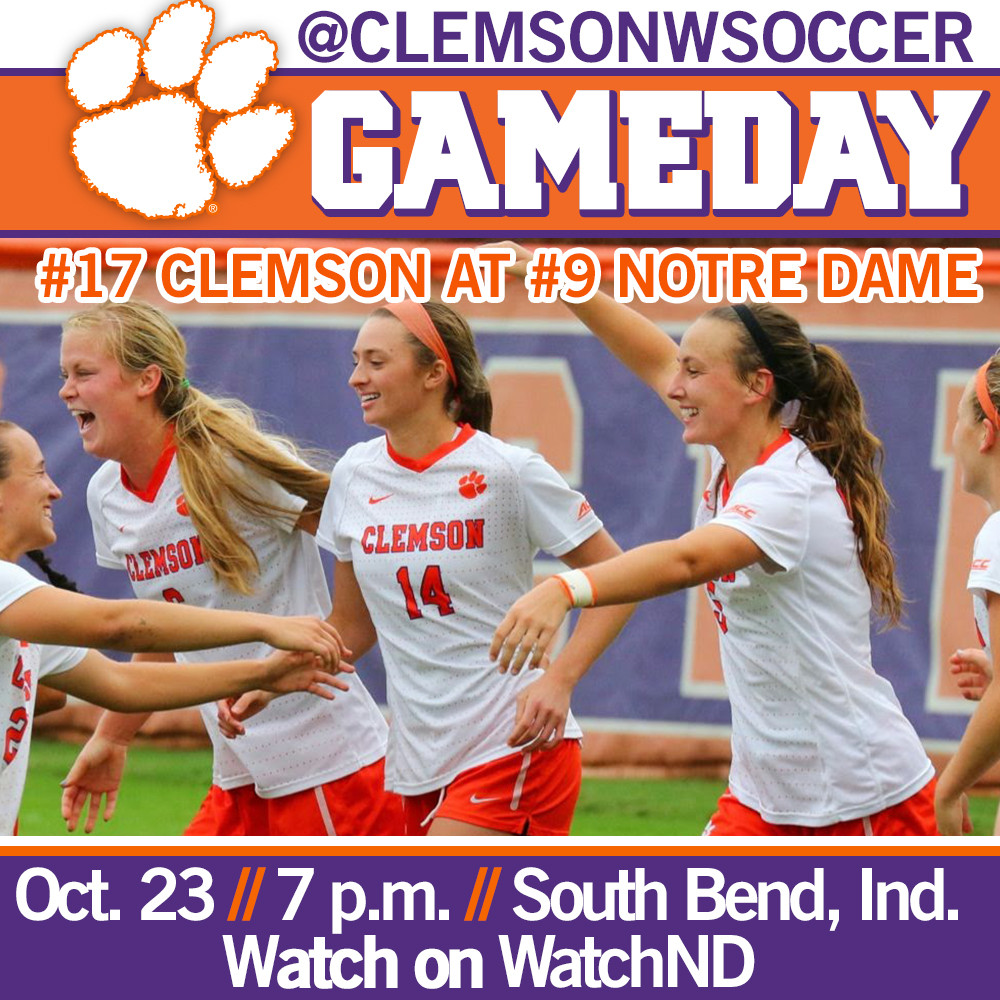 CLEMSON, S.C.- The 17th-ranked Clemson women’s soccer team heads to South Bend, Ind. to face the ninth-ranked Notre Dame Fighting Irish on Thursday night at 7 p.m. The game will be broadcast on WatchND.TV.

Clemson is 11-2-2 on the season and 4-2-1 in conference, most recently defeating Miami 2-0 on Oct. 18th at Historic Riggs Field. With the win over Miami, Clemson has recorded 11 wins for the first time since the 2006 season. The Tigers have won three ACC matchups in a row and have not lost a conference game since Sept. 25th when they fell 2-1 to the then eighth-ranked North Carolina Tar Heels. Clemson is ranked 17th by TopDrawerSoccer.com and 20th by both Soccer America and the NSCAA. Clemson’s RPI is 22nd and the Tigers are one of six ACC schools with an RPI in the top 25. North Carolina is ranked third, Florida State sixth, Virginia ninth, Virginia Tech 18th, Notre Dame 20th and Clemson 22nd.

The Tigers are led by sophomore Catrina Atanda. The midfielder has six goals and 14 points, both highest on the Clemson team. However, four Tigers’ have 10 points or more and 12 different players have scored at least one goal this season. Freshman Shannon Horgan is tied for fourth in the conference with six assists. Sophomore Kailen Sheridan leads the Tigers in goal with 34 saves and eight goals allowed in over 1,223 minutes played in goal. She also has six solo shutouts, fourth most in the conference. The eight goals allowed this season is second fewest by a team in the ACC, trailing only Florida State who has seven.

Notre Dame is 10-4-1 overall and 5-2 in the ACC, most recently besting Syracuse 2-0 on Oct. 18. The Irish are ranked as high as ninth by the NSCAA. They are also ranked 11th by Soccer America and 16th by TopDrawerSoccer.com. Sophomore Morgan Andrews leads the Irish with six goals and 17 points, both team highs. Sophomore goalkeeper Kaela Little leads Notre Dame in goal with 51 saves and only nine goals allowed in over 1290 minutes in goal.

The Tigers and the Irish met for the first time in 2013. Notre Dame, then ranked 12th, emerged victorious with a 2-0 victory in Clemson on the Tigers’ senior night.  Notre Dame is fourth in the ACC standings with the Tigers right behind in fifth, so the matchup will have a big impact on the conference standings moving forward.