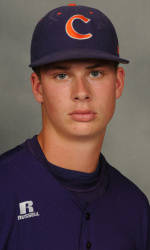 The #16 Clemson Tigers used timely hitting and three crucial double plays on defense to defeat #14 Auburn 13-7 and capture the Auburn Regional title in front of 4,096 fans at Plainsman Park on Monday. Clemson, who finished the regional with a 3-1 record, improved to 41-22 on the season, while Auburn, who was 3-2 in the regional, ended its season with a 43-21 record.

Clemson scored three runs in both the first and second innings and never relinquished the lead. However, Auburn rallied with three runs in the second and two runs in the third, but Clemson pulled away late thanks to three seventh-inning runs and two ninth-inning runs. Clemson stranded 12 Auburn runners on base thanks in part to two inning-ending double plays in the seventh and eighth innings and overcame Auburn putting its leadoff batter on base in six of the nine innings.

With the victory, Clemson won its fifth regional title in its last five regional appearances (2005,06,07,09,10) and advanced to the super-regional round for the ninth time in the 12 years of the format.

Mike Freeman hit a one-out single to left field in the first inning to extend his hitting streak to 11 games and Jeff Schaus followed with a bloop single to left-center. Kyle Parker then belted a three-run homer to right-center, his 20th long ball of the year. He became the ninth Tiger in history to total 20 home runs in a season.

In the top of the second inning, Wilson Boyd’s double to center. After Will Lamb moved both runners up a base on a sacrifice bunt. After Freeman struck out, Schaus lined a two-out single to center to score Boyd and Kieboom.

Ryan Jenkins led off the bottom of the second inning with a double down the left-field line on a 1-2 pitch and advanced to third on Casey McElroy’s groundout. After Creede Simpson walked, Justin Bryant lined a single to center to plate Jenkins. Justin Fradejas followed with a single through the left side to score Simpson. Trent Mummey then hit a routine grounder to Shaffer at first. He wheeled to throw to second but held onto the ball, then he tossed to Dominic Leone at first, but the pitcher was not ready to receive the throw and Mummey reached on Leone’s error. Dan Gamache followed with a walk to bring home Bryant, but Leone struck out Brian Fletcher and got Hunter Morris to fly out for the inning-ending out.

John Hinson hit a solo homer to right-center in the top of the third inning, his third long ball of the regional and 15th of the season, to up Clemson’s lead to 7-3.

Jenkins led off the bottom of the third inning with a double over the third-base bag on a 1-2 pitch and scored on McElroy’s double over the first-base bag. On an 0-2 pitch to Simpson, Leone struck the batter out but a balk was called instead. Leone later struck Simpson out looking for out #1, then Bryant laced a single down the right-field line to bring home McElroy. After Fradejas struck out and Mummey drew a two-out walk, Gamache hit a chopper headed for left field, but Hinson snagged the ball out of the air and threw to first to end the inning.

In the top of the fifth inning, Schaus led off with a double down the right-field line. Two batters later, Brad Miller grounded a single up the middle to score Schaus. It also extended Miller’s hitting streak to 14 games.

Mummey hit a two-out, solo homer to right field in the bottom of the fifth inning, his 17th long ball of the year, to narrow Clemson’s lead to 8-6.

In the top of the seventh inning, Parker walked with one out and Miller reached on a bunt single. After Hinson was hit-by-pitch to load the bases, Shaffer lined a double down the left-field line to score Parker, Miller, and Hinson.

McElroy led off the bottom of the seventh with a line-drive homer to right field, his ninth long ball of the year. Simpson followed with a double to right-center, then Bryant flied out to deep left-center. Pinch-hitter Kevin Patterson ripped a liner right at Parker in right, who misjudged the ball as the ball fell just in front of him for a single, and Simpson advanced to third base. But Clemson’s defense came up with a big play when Shaffer fielded Mummey’s hard-hit grounder, stepped on first base, and threw home to retire Simpson for an inning-ending double play to keep Clemson ahead 11-7.

Gamache led off the eighth inning with a double down the left-field line and Fletcher struck out looking for out #1. Morris then ripped a liner, but it was right at Shaffer at first. Shaffer made the catch and threw to Miller at second to record the inning-ending double play.

Clemson added two two insurance runs to its lead in the top of the ninth inning. Hinson lined a two-out double to center and Shaffer walked. Boyd then lined a double to left-center to score Hinson and Shaffer, giving Clemson a 13-7 lead.

In the bottom of the ninth inning, Jenkins struck out for out #1, then McElroy singled to center and Simpson singled to left. Bryant loaded the bases with a single to left, then Tony Caldwell struck out swinging for out #2. Mummey followed with a groundout to Shaffer at first to end the game.

Schaus went 3-for-5 with a double, two RBIs, and two runs to lead Clemson, who had 14 hits in the game. Boyd went 2-for-5 with two doubles and three RBIs, while Miller, Hinson, and Kieboom all totaled two hits apiece. Shaffer added three RBIs, while Hinson scored three runs as well. Clemson stranded just five runners on base thanks to going 6-for-12 with runners in scoring position.

Jenkins, McElroy, and Bryant all had three hits apiece to pace Auburn, who totaled 18 hits.

Hinson was named the Auburn Regional MVP thanks to going 9-for-16 (.563) with three homers, one double, five RBIs, five runs, a 1.188 slugging percentage, a .611 on-base percentage, and one walk along with not making an error in the field and coming up with several crucial defensive plays in four games.