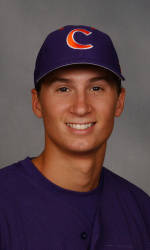 Addison Johnson scored on Alex Lee’s suicide squeeze bunt with one out in the 13th inning to lift #15 Clemson to a 5-4 win over #25 Miami (FL) in the ACC Tournament at The Baseball Grounds of Jacksonville on Wednesday. The Tigers trailed 4-3 after the Hurricanes scored a run in the top of the 13th, but scored two runs in the bottom of the 13th to win their first game of the round-robin tournament. Fourth-seeded Clemson also improved to 37-20 overall, while #5-seed Miami dropped to 35-21.

Starter Daniel Moskos pitched 7.2 innings. It was the longest outing of his career and the longest outing by a Tiger in 2007. Moskos also allowed three runs on eight hits. The three Clemson hurlers combined for 12 strikeouts against only two walks.

The Tigers threatened to take the lead in the first inning, but good positioning kept the game scoreless. Marquez Smith and Andy D’Alessio ripped two-out singles, then both advanced on a passed ball. Taylor Harbin followed with a liner up the middle, but second-baseman Jemile Weeks was playing Harbin there and made the inning-ending catch to prevent two runs from scoring.

The Hurricanes took a 2-0 lead in the third inning. Ryan Jackson led off with a bloop single to right field and went to second on Blake Tekotte’s sacrifice bunt. Roger Tomas then laced a double down the third-base line to score Jackson. Two batters later, Weeks blooped a two-out single to right-center to plate Tomas.

Miami added to its lead with a run in the top of the fifth inning. Tekotte belted a one-out double to right field and went to third on Tomas’ groundout. Weeks then came through with another two-out single, this time up the middle to plate Tekotte, giving the Hurricanes a 3-0 lead.

The Tigers came right back and scored a run in the bottom of the fifth. Marquez Smith then grounded out to end the inning.

For the fifth inning in a row, the Tigers put their leadoff batter on base in the seventh inning, this time on a walk by Burgess. Two batters later, pinch-hitter Alex Burg lined a single to right field to move Burgess to third. Smith then dribbled a single to the pitcher to score Burgess. Pinch-hitter Ben Paulsen then hit a sharp grounder to Tomas at third. He threw to Weeks at second for out #2, but Weeks throw to first base was low on what would have been the inning-ending out. The ball got away from Yonder Alonso, allowing Lee, a pinch-runner for Burg, to score the tying run.

After the Tigers could not capitalize on several opportunities to win the game after putting their leadoff batter on base, the Hurricane took the lead in the top of the 13th inning. Tomas led off with a double to left-center and went to third on a passed ball. Yonder Alonso then gave Miami a 4-3 lead with a sacrifice fly to center.

But the Tigers refused to go down quietly in the bottom of the 13th inning. Doug Hogan led off with a single under the glove of Jackson at shortstop. After Mitchell fouled out for out #1, Hogan stole second. Johnson followed with a walk, then Burgess bounced a single over Alonso’s head at first to score Hogan and advance Johnson to third base. After intentionally walking Chalk to load the bases, the Hurricanes brought in rightfielder and lefty Dennis Raben to face the lefthanded hitting Lee. With a 1-0 count, Johnson broke from third base on the suicide squeeze bunt and easily scored when Lee bunted the ball between the mound and third base.

Burgess led the Tigers with two hits and two walks along with driving home the tying run in the 13th inning. D’Alessio was also 2-for-2, but left the game in the seventh inning. He was hit by a pitch on his forearm earlier in the game.

Chalk made his return to the lineup after missing the previous 15 games due to a back injury. The junior was 1-for-4 with a double, RBI, and two walks atop the Tiger lineup.

Clemson, who outhit Miami 12-11, had 22 baserunners in the game, thanks in part to eight walks. The Tigers also stranded 14 runners on base, including 12 in scoring position, and had eight of their 13 leadoff batters reach base in the contest.

Tomas, Alonso, Weeks, and Mark Sobolewski all had two hits apiece for the Hurricanes.

Clemson will play #8-seed Wake Forest on Friday at 4:00 PM in its next action in the ACC Tournament.