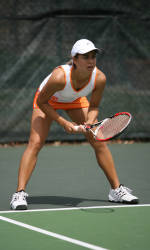 CLEMSON, SC – The 14th-ranked Clemson women’s tennis team opened the 2009 ACC season with a 4-3 upset-victory of #4 Georgia Tech on Wednesday afternoon at the Hoke Sloan Tennis Center. The match was the first held outdoors for the Tigers, who now own an 8-3 record with the win. Estefania Balda’s win at flight two scored the fourth point for Clemson and proved to be the decisive match as the Tigers posted wins at the top three flights as well as in doubles play.

The Yellow Jackets dropped to 5-3 on the year.

The Tigers swept the doubles matches to claim their 10th doubles point of the season. Ina Hadziselimovic, ranked 27th in the Campbell/ITA Tennis poll, upset Georgia Tech’s fifth-ranked team of Amanda McDowell and Irina Falconi at the top spot with an 8-6 victory.

Estefania Balda’s and Alexandra Luc extended its winning streak to five straight with an 8-6 win over Sasha Krupina and Lynn Blau at the third position.

Clemson and Georgia Tech split the first two singles matches as Hadziselimovic picked up the win for the Tigers and Hickey won at flight four for the Yellow Jackets. Hadziselimovic defeated 38th-ranked Christy Striplin in straight sets at number three (6-3, 6-1), while Hickey’s 6-3, 6-2 win was over Wong.

Bek scored Clemson’s third point of the afternoon as she handed 13th-ranked Falconi just her sixth loss of the year. The Tiger freshman, ranked #15, won both sets by a 6-2 margin.

Balda then clinched the Tigers’ victory with a win over the defending national champion McDowell. The junior from Guayaquil, Ecuador edged the Yellow Jacket player, 7-5, in the first set and then claimed the second, 6-4, to improve to 11-11 on the year.

Georgia Tech scored its second point of the day at the sixth position as Viet Ha Ngo defeated Henry, 6-3, 7-5.

The fifth flight match was a battle between Luc and Krupina.Krupina won the first set, 6-3, but Luc didn’t drop a game in the second set for the 6-0 win to tie the match. The two played to a six-six tie in the third set before Krupina eked out the tie-break and the Yellow Jackets’ third point.

Clemson will return to the court on Sunday, Mar. 1 as the Tigers will travel to SEC foe Kentucky for a 12:00 pm match in Lexington, KY.