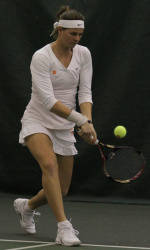 CLEMSON, SC – The 14th-ranked Clemson women’s tennis team downed the College of Charleston, 5-2 on Sunday at the Clemson Indoor Tennis Center. The Tigers (2-0) improved to 23-1 all-time against the Cougars (0-1). Senior Ina Hadziselimovicfor the top mark in Clemson history.

“Doubles is a different game than singles,” said Bek. “You have to work together with your partner. I really focus on working together with my partner and trying to find a way to win. I’ve won a lot of matches with Ina (Hadziselimovic) and a lot of matches with Keri (Wong); I’ve also played with Ani (Mijacika) and today I played with Romy (Kölzer) and I have a lot of good memories with each of them.”

Clemson claimed the doubles point for the first time this season, generally a strong indicator of success in the match. Last season, Clemson was 15-0 when registering the doubles point and just 6-11 when dropping the best-of-three point. Keri Wong paired with Klara Vyskocilovafor an 8-3 win over Maddox and Viana at flight one.

Monika Kochanova and Nelly Ciolkowskithen fell at flight three doubles to the Newman sisters, 8-3, sending the doubles decision to Bek and freshman Romy Kolzer at flight two. The duo traded games with their Cougar counterparts before eventually clinching the match, 8-6. It seems appropriate that Kolzer’s first career doubles win at Clemson comes alongside the Tigers’ newly crowned career-leader, who now has 106 doubles wins under her belt.

Bek stayed undefeated in dual match singles as well, winning her second straight match without dropping a set to improve to 2-0. It was the 98th win over her career overall, and the fourth in the 2011-12 season.

Kolzer fought off and early break and was a game down in her second set, but came back to win in a tiebreaker, 6-4, 7-6 (3). Sophomores Klara Vyskocilovaand Monikia Kochanova fell at three and five singles, respectively.

Clemson returns to action on Jan. 25 when they play host to Winthrop at 2:30 pm at the Indoor Tennis Courts.