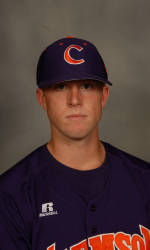 CLEMSON, S.C. – With his team’s season on the line, Clemson pitcher Scott Weismann answered a surprise call from his coach with a sterling performance Sunday in the Tigers’ 10-0 victory over Tennessee Tech in an elimination game at the Clemson Regional.

The freshman right-hander pitched eight scoreless innings, allowing only four hits, to help the top-seeded the Tigers (42-20) make short work of the Golden Eagles (31-24-1) on a long day for the host team. The Tigers play Oklahoma State (34-22) tonight in the championship round.

Weismann, who averaged almost one strikeout per inning in 16 previous appearances, struck out only two, relying on his defense in only his third start of the season.

“Obviously, I threw more to contact and just to get outs,” said Weismann (3-1). “In a relief situation, you try to blow it out and strike people out. But when you know you have to pitch a long time, you have to save pitches.”

Ben Paulsen and Chris Epps homered for the Tigers, who had 14 hits off four Tech pitchers. Paulsen’s two-run homer capped a four-run third inning. The Tigers added three in the fourth to take an 8-0 lead.

Weismann’s long stint was what Clemson coach Chris Dwyer his starter. The top-seeded Tigers must beat Oklahoma State twice to advance to the Super Regionals.

Weismann was at home with Dwyer, his roommate, when Clemson pitching coach Kyle Bunn called with the pitching change. Dwyer is starting Sunday night’s game.

“I wasn’t really nervous. I felt good,” Weismann said. “It wasn’t that much pressure ­ before the game a little bit. Once you get going and throw that first pitch, are feeling good, and then your team starts scoring runs like that.”

The Golden Eagles hit into double plays in each of the first three innings.

“I think it set the tone for the day and gave us the dagger,” Tech coach Matt Bragga said.