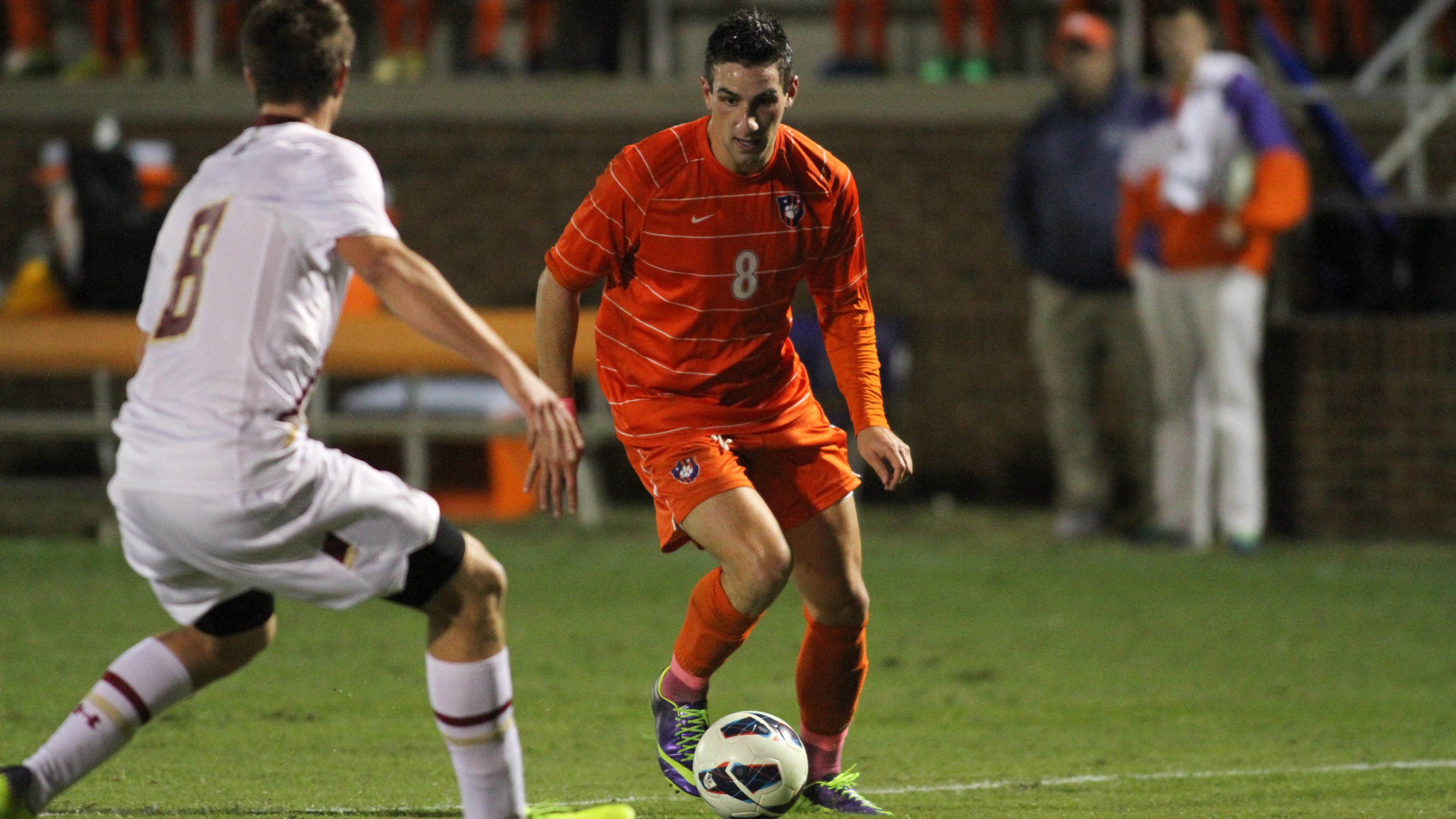 CLEMSON, SC – #14 Clemson won its 10th match of the season with a 3-2 victory over Boston College in an Atlantic Coast Conference men’s soccer match at Clemson, SC Friday night. With the win, the Tigers are now 10-4-2 overall, 5-2-2 in the ACC.  Boston College falls to 6-6-2 overall and 3-5-1 in league play.  This is the first time since the 2006 season that the Tigers have won 10 matches in a season.  It is also the first time since 1998 that the Tigers have won five Atlantic Coast Conference matches in a single season.Manolo Sanchez scored his fifth goal of the season in giving the Tigers a 1-0 advantage early in the first half.  Ara Amirkhanian from the middle of the field sent a pass forward to Sanchez.  Sanchez’ shot from 16 yards out beat Boston College’s keeper, Alex Kapp to his left and the ball rolled into the goal near the right post.T.J. Casner scored late in the first half giving Clemson a 2-0 lead at the half.  On a give and go, Casner from the left corner of the box crossed the ball to Thales Moreno at the top of the arc.  Moreno gave a diagonal pass to Casner who flicked a shot over a diving Boston College goalkeeper, Alex Kapp to the upper right corner of the netting for his second goal of the year. The Tigers’ Bobby Belair scored his first goal of the season in the 55th minute of play giving Clemson a 3-0 advantage.  Thomas McNamara crossed the ball from the left side to Bobby Belair.  Belair with his back to the goal turned to his right and tapped the ball in from six yards out. Boston College came back and scored two straight goals.  In the 70th minute, Zeiko Lewis passed the ball to Cole DeNormandie setting up a one-on-one situation with the Tiger goalkeeper Andrew Tarbell.  DeNormandie scored from 14 yards out for his third goal of the season. In the 85th minute of play, the Eagles scored again.  Lewis won the ball in the box and laid a pass with his left foot to Giuliano Frano.  Frano fired a shot from the penalty mark into the netting for his third goal of the year. Clemson outshot Boston College 14-10 in the match and had three corner kicks compared to the Eagles’ one. “I’m very proud of the guys,” said Clemson Head Coach Mike Noonan.  We scored three very good goals.  I thought T.J. Casner played great.  Paul Clowes had a steady game as did Tommy McNamara.  Bobby Belair did well too, I was happy for him that he was able to score.  He’s a tough kid, and I was glad he was able to play tonight. “I am happy that we won our 10th game, but we have two more and we need to work hard preparing for them.  I think the program has shown progress through the process and we still have more work to do.” The Tigers will play at Syracuse next Friday and will finish the regular season on November 8 when the Tigers play host to Duke at the Tigers’ Historic Riggs Field. Clemson – Manolo Sanchez (Ara Amirkhanian) 16:14 Clemson – T.J. Casner (Thales Moreno) 38:18 Clemson – Bobby Belair (Thomas McNamara) 54:14 Boston College – Cole DeNormandie (Zeiko Lewis) 69:57 Boston College – Giuliano Frano (Zeiko Lewis) 84:23 Shots:  Clemson 14, Boston College 10 Corner Kicks:  Clemson 3, Boston College 1 Saves:  Andrew Tarbell (CU) 1, Alex Kapp (BC) 3 Fouls:  Clemson 11, Boston College 11 Attendance:  2,108