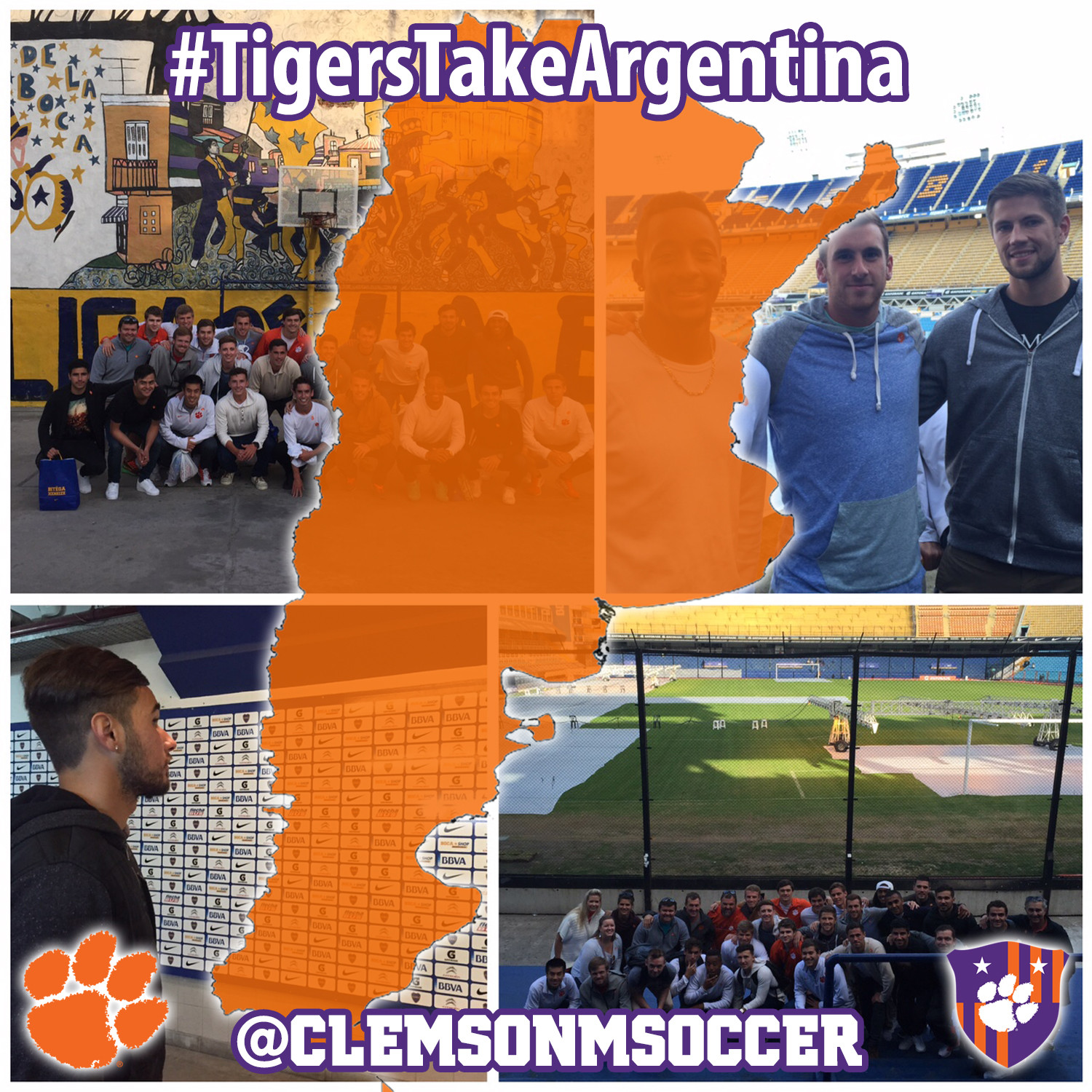 Day 3 began with breakfast in the hotel at 7:30 a.m. The food has been delicious so far and this morning was no different. A wonderful variety of breakfast meats and fruits were on offer. Shortly after breakfast we departed the hotel to go to the training facility we have been using whilst in staying in Buenos Aires. It was a very light session this morning due to the fact we played a 90 minute game yesterday and legs were a little tired and heavy. Some activation with Jess (our strength and conditioning coach) followed by a very brief training session. We then returned back to the hotel.

Now showered and changed, the boys were all eagerly anticipating the rest of the day. We loaded into two minibuses and headed towards the famous Boca Juniors stadium, “La Bombonera”. On route to our final destination, the buses stopped outside what looked to be a very old, run down and shabby restaurant (El Obrero). This is where we would eat lunch. They say “never judge a book by its cover” -and they were right! The food proved to be very tasty and inside were hundreds of scarves and pennants of soccer teams from all over the world. Very charismatic! We immersed ourselves into the Argentinian culture by ordering the “Carne”. Lunch over, we got back on the bus to continue our journey to La Bombonera (the chocolate box).

We finally arrived at the Boca Stadium. Everything surrounding the ground was blue & yellow, the historic colors of this world renowned fútbol club. You can see how much the fans love their club. We walked into the club merchandise shop to be greeted by a young gentleman by the name of Martin, he would be our tour guide for the afternoon. The tour began in the newest stand of La Bombonera, the “preferred” seating area. Here Martin informed us about the fantastic history of Boca Juniors. Some of the main things I can remember are:

We then proceeded to the home standing section. This section holds 7,000 crazy Boca fans. The away team locker room lies directly underneath this section. It must be so intimidating being an away team coming to Boca! The away fans’ section directly opposite holds 5,000 people, of course the way the ground is designed there is only one bathroom for all 5,000 people to share! The Boca people want to make the away fans as uncomfortable as possible! The next stop on our tour was the Boca museum. Containing tons of memorabilia and history, it was very interesting. On my way out of the club merchandise shop I decided to purchase a Boca Jersey, on the back I had printed “Maradona 10” – a club legend.

The tour had now finished and we walked about five minutes to a small road of little Boca shops and stalls. We were told we could go explore and see if there were any souvenirs we wanted to take home. Our 15 minutes had passed and I began making my way back to where we agreed to meet. As I arrived I saw that five of the guys (Diego, Johnny, Trey, Ollie and Mad Mike) had been invited into a game of pick up street fútbol by some local Argentinians. The game was first team to five goals. Clemson quickly raced into a 2-0 lead through goals from Trey and Mad Mike. It look as though it would be a very easy win. However, the Argentines fought back, they scored two to make it all even and then another two to put them 4-2 up, and just one goal away from winning. All of a sudden, the mentality of our boys changed, it went from a chilled game of pick up into an intense battle of Clemson vs. Argentina. We tied the game through two goals from Johnny, it was now next goal wins! Tackles flying in and a very anxious look on Coach Noonan’s face as he didn’t want anybody to get injured! I remember standing next to Coach Jones on the sideline and him saying “boys if we are smart here, we’ll let them win.” Haha. Argentina has a history for fútbol violence and we didn’t want to be their next victims after a golden goal loss! Up steps Ollie to grab the winner and the rest of us all ran onto the court to celebrate! Thankfully, the locals joined us for a group photo at the end and were gracious in defeat. Game finished, we headed back to the hotel for dinner.

Our morning started out with a recovery and training session. We play our second scrimmage tomorrow morning, against Racing Club de Avellaneda.

For the afternoon, we headed to La Boca neighborhood. We ate lunch at a traditional Argentinian restaurant, called El Obrero. Many of us chose the steak, as Argentina is well known for its beef. We also tried appetizers, such as provoleta (chargrilled provolone cheese), yum!

Next, we headed to La Bombonera, the stadium of the vastly popular Boca Juniors. The stadium was hallowed ground for many of our players, who have followed Boca Juniors since they were children. We were taken through a guided, behind-the-scenes tour of the entire stadium. It was obvious just seeing the looks on their faces that the experience was extremely special to each and every player.

After touring the stadium and museum, and spending some time (and a few Argentine pesos) in the gift shop, we walked to a nearby street fair/market to do some souvenir shopping. As we were about to leave, a group of our players were walking by a neighborhood street soccer “field” and were asked to play a pickup game of 5v5. Of course, the competitors that they are, they could not say no.

What ensued was an incredibly spontaneous, exciting, emotional part of the trip. Michael Melvin, Oliver Shannon, Johnny Heckman, Trey Langlois and Diego Campos (who played keeper!) lined up against a group of locals from La Boca. The Tigers won 5-4 (be sure to check out some of the video highlights on Instagram and Twitter, @ClemsonMSoccer), but the win was almost secondary to being about to see the pure joy and love of the game from everyone involved, on both sides. A large group of fans (members of the Clemson team and staff as well as many people from the neighborhood) lined the street to catch some of the action and provide support for their side, singing, cheering and chanting. (Yes, the C-L-E-M in cadence count was heard in La Boca today!)

No one seemed to want to stop playing, but eventually, it was decided that the first team to five would be the winner, so when Ollie Shannon broke the 4-4 tie, all of the Tigers lining the sides ran out to celebrate. Everyone walked away with huge smiles on their faces, and Head Coach Mike Noonan even joked that we now have a 1-1 record for the trip!

To say the very least, it was a special day, one that no one on the trip will ever forget.