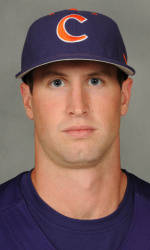 The #12 Clemson Tigers scored all 11 of their runs in the first three innings and cruised to an 11-1 victory over Sacred Heart in the Clemson Regional in front of 5,194 fans at Doug Kingsmore Stadium on Friday night. The Tigers, who moved into the winners’ bracket, improved to 42-18 on the season. The Pioneers, who fell into the losers’ bracket, dropped to 34-22 in 2011. It was the first-ever meeting between the two schools.

Jon Surber struck out all three batters he faced in the ninth inning to close out the game.

The Tigers wasted little time taking the game’s first lead in the first inning. John Hinson led off with a four-pitch walk and went to third base on Brad Miller reached on a fielder’s choice to short as Hinson scored and Pohl was retired at third base. After Will Lamb was hit-by-pitch and Jeff Schaus grounded a single up the middle to score Miller as Lamb advanced to third and Schaus moved up to second on the throw to third base. Chris Epps then lined a single to right-center to score Lamb and Schaus along with upping his hitting streak to 10 games.

In the second inning, Hinson hit a one-out double down the right-field line, stole third, and scored on Pohl’s groundout to second.

In the third inning, the Tigers scored six runs to take a double-digit lead. Lamb led off with a walk and advanced to second base when right-fielder Dave Boisture robbed Shaffer of a home run in right-center. After Schaus walked, Epps ripped a single to left-center to plate Lamb. Jason Stolz followed with a single through the left side to score Schaus, then Spencer Kieboom grounded a single through the left side to score Epps. After the Pioneers brought in Fitton to pitch, Hinson blasted his first pitch deep over the fence down the right-field line for a three-run homer, his eighth long ball of the season.

In the sixth inning, Rob Griffith led off with a double to center and went to third base when John Murphy’s flyball was lost in the evening sky by Lamb in center. Two batters later, Dan Perez reached on a fielder’s choice to first as Murphy was retired at second and Griffith scored.

Hinson led the Tigers’ 12-hit attack by going 3-for-3 with a homer, double, three RBIs, three runs, a walk, and steal. Pohl went 3-for-5 with two doubles and an RBI, while Epps was 2-for-4 with three RBIs and a walk.

Derick Horn had a team-high two hits for the Pioneers, who totaled seven hits in the contest.

Clemson will face Coastal Carolina in the winners’ bracket on Saturday at 7:00 PM at Doug Kingsmore Stadium. The Tigers will be the designated visiting team and occupy the third-base dugout.