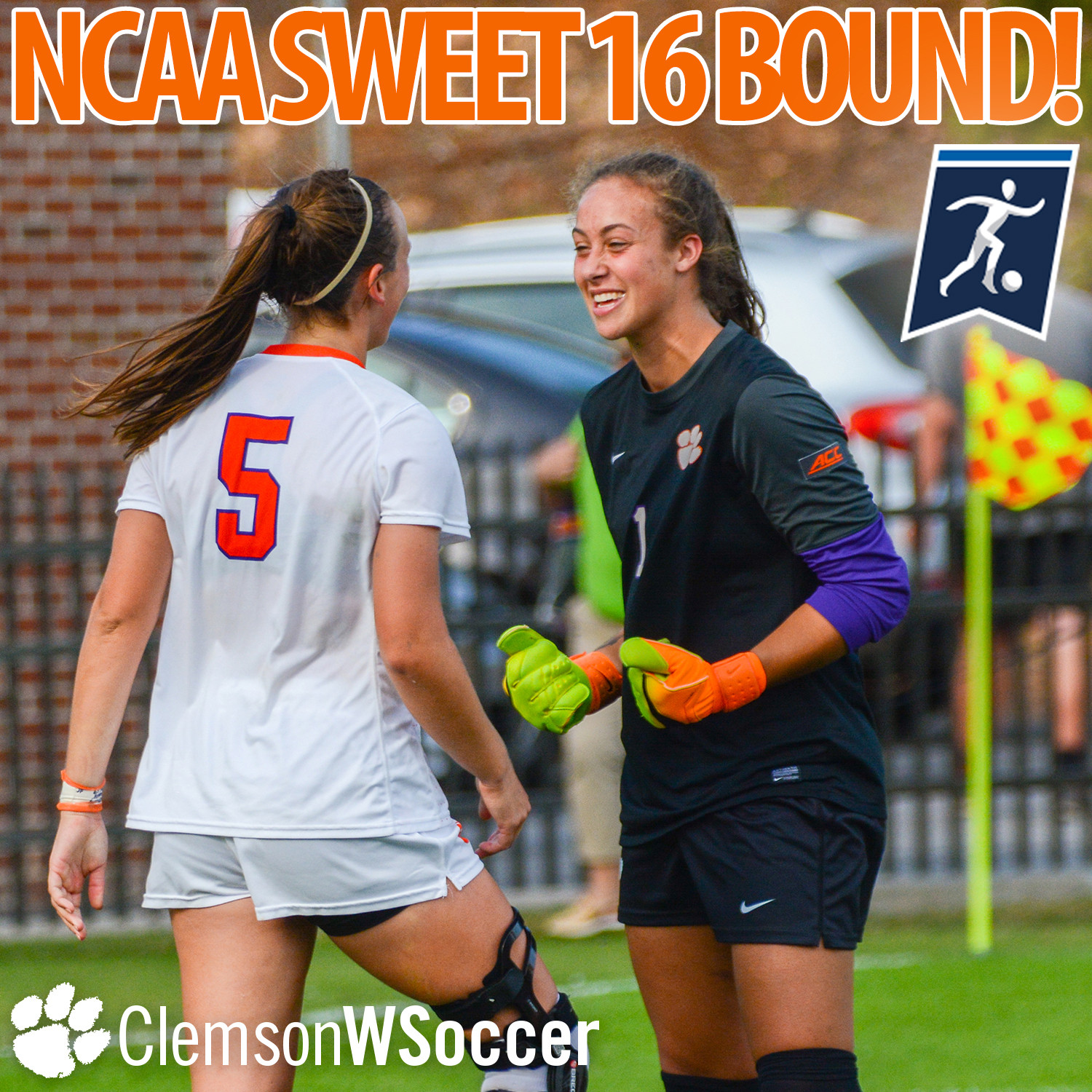 #12 Clemson Headed to NCAA Sweet 16 for First Time in 10 Years after Winning PKs vs. #17 Arkansas

Re-live the excitement of yesterday’s match, a 4-2 PK win over Arkansas sending #Clemson to the #NCAASoccer Sweet 16! #ItsOurTimeTigers

CHAPEL HILL, N.C. – Kailen Sheridan made two huge saves and also made her own penalty kick attempt to send the 12th-ranked Tigers to the NCAA Sweet 16 on Friday afternoon in Chapel Hill, N.C. Clemson and No. 17 Arkansas tied 0-0 in 110 minutes and the Tigers (14-4-4) then advanced 4-2 on penalty kicks to make the final 16 of the national tournament for the first time in 10 years.

The Tigers dictated play for the majority of play, outshooting the Razorbacks 19-13 overall, and 5-3 in shots on goal. Clemson also earned nine corner kicks to Arkansas’s two in the contest. In the 80th minute of regulation, a handball in the box gave Clemson a chance at a penalty kick, but Katie Sprouse’s attempt was saved on a beautiful diving stop by Arkansas goalkeeper Cameron Carter. Five minutes later, Jenna Polonsky launched a shot that hit the crossbar, perhaps the best two chances of the match.

After the scoreless 110 minutes, the match went to penalty kicks. It was a familiar situation for the Tigers, who advanced 5-4 in PKs over Miami in the ACC Quarterfinals earlier this season. Arkansas shot first, making its first two attempts, as did Catrina Atanda and Polonsky.

On the Razorbacks’ third attempt, Sheridan dove to her right to make the save, and then walked out to the line to attempt her own PK, which she made. The senior and Whitby, Ontario native then stepped right back into the goal and saved Arkansas’s fourth attempt, leaving it up to senior Claire Wagner, who nailed her shot to send the Tigers on to the next round.

This is Clemson’s sixth time in the NCAA Sweet 16 in program history, and the first since 2006.

The Tigers will face the winner of North Carolina and Kansas on Sunday afternoon at 1 p.m. in Chapel Hill. The Tar Heels and Jayhawks kick off at 6:30 p.m. on Friday.

Head Coach Eddie Radwanski Quotes:“When two good teams play against each other at this stage of the game, it can become a little bit of a chess match. I’m so proud of our kids for persevering, and being determined not to give up. We had a chance on a penalty kick in regulation, but Arkansas’s keeper made a great save. We kept at it, and that’s what this team has been about all season. We really played with a fighter mindset, and kept creating chances all the way down to the last second of the second OT period.

“When you get to a penalty kick shootout, it can be a little bit of a lottery. I was hoping our experience against Miami in the ACC Quarterfinals would pay dividends, and I think it did. Our shooters were confident, Kailen made two great saves and a PK of her own. This team deserved to move on to the Sweet 16 and I’m so pleased. We’ve earned the right to play on Sunday.

“I also want to congratulate Arkansas. They are a committed and hardworking team, and a tough team to play against. They made things difficult for us.”