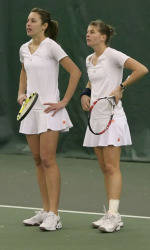 #11 Women’s Tennis To Play Host To Furman On Thursday

CLEMSON, SC – Reigning ACC Player-of-the-Week Ani Mijacika and the 11th-ranked Clemson women’s tennis team will be back in action on Thursday afternoon as the Tigers play host to the Furman Paladins. The match is set to begin at 3:00 pm at the Clemson Indoor Tennis Courts.

The Tigers boast a 4-0 record for the 2009 dual season and are coming off a pair of wins at the ITA National Team Indoor Kick-Off Weekend. Meanwhile, Furman is still looking for its first win of the year having dropped its first two matches against South Carolina and Georgia.

The Tigers and Paladins have met on the tennis court 41 times with Clemson leading the series score, 38-3. Most recently, the Tigers won a 6-1 decision in Greenville, SC during the 2008 season.

Mijacika is ranked fourth in the ITA Tennis singles poll with a 16-3 record through the fall and spring seasons combined. She has posted wins over two ranked opponents and has defeated all four players in straight sets during Clemson’s dual matches.