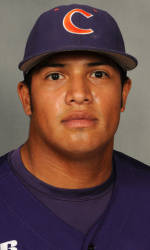 The Tigers held a 3-0 lead until Will Currier hit a two-out grand slam in the sixth inning. Clemson scored two runs in the top of the ninth inning to take the lead, only to see the Blue Devils tie the score on a two-out double by Marcus Stroman in the bottom of the ninth inning. The potential winning run was thrown out at the plate on the play to keep the Tigers alive.

Clemson again staved off defeat in the 10th inning on a wild play in which the Tigers recorded two outs on one play, including the second out when Brian Litwin tried to score the winning run from second base on a wild pitch. But Tomas Cruz sprinted from the mound to recover the wild pitch near the backstop and threw a one-hopper to catcher John Nester, who scooped the ball, blocked the plate, and made the tag to keep the Tigers in the game. Then in the 11th inning, the Tigers scored six runs on only two hits to put the game away.

Cruz (2-2) earned the win, as he allowed six hits, one run, and no walks with two strikeouts in 4.0 innings pitched. Starter Scott Weismann allowed just four hits in 7.0 innings pitched as well.

Ryan Knott (2-1), the fourth of six Blue Devil hurlers, suffered the loss, as he yielded two runs (one earned) without recording an out. The six Duke pitchers combined to walk 10 batters and hit three more.

The Tigers tripled their lead in the top of the fifth inning when Jeff Schaus lined a two-run homer to right field, his seventh home run of the season and first since March 17. Chris Epps, who led off with a hit-by-pitch, also scored on the play.

In the bottom of the fifth inning, Jeremy Gould led off with a single off the wall in left to extend his hitting streak to 11 games. It also broke a string of 11 batters in a row retired by Weismann. But the Tigers got out of the inning and Weismann faced the minimum through the first five innings.

But after the Tigers left the bases loaded in the top of the sixth inning, the Blue Devils rallied in the bottom of the sixth inning. Eric Brady and Stroman led off with walks. After the next two Blue Devils were retired, Jake Lemmerman walked to load the bases. Currier then lined a 2-2 pitch over the fence for a grand slam down the left-field line. It was his sixth home run of the season and Duke’s only hit of the inning.

In the eighth inning, Brad Miller hit a leadoff double to left-center and went to third two batters later on Addison Johnson’s one-out single to left, as Johnson moved to second on the throw to the plate. But Epps struck out and Freeman grounded out to end the frame.

In the top of the ninth inning, Schaus led off with a hit-by-pitch and Hinson followed with a check-swing double that landed on the left-field line to move Schaus to third. Will Lamb’s groundout to second plated Schaus and advanced Hinson to third, then Wilson Boyd lofted a sacrifice fly to center to score Hinson, giving the Tigers a 5-4 lead.

In the bottom of the ninth inning, Will Piwnica-Worms reached with one out and an infield single and went to second when Miller’s throw went into the stands. Pinch-hitter Ben Grisz singled to right-center to move Piwnica-Worms to third. Brady followed with a sharp liner that Hinson stabbed on a short-hop and threw home to retire Piwnica-Worms at the plate for out #2. But Stroman came through with a double down the left-field line on a 1-2 pitch to score pinch-runner Jonathan Foreman. However, the Tigers retired Brady at the plate 7-5-2 to send the game into extra innings.

After the Tigers left the bases loaded in the top of the 10th inning, Litwin led off the bottom of the 10th with a single up the middle. Ryan McCurdy’s sacrifice bunt moved Litwin to second and McCurdy reached on an error on the play. Lemmerman struck out in a ball in the dirt that Nester could not find. The two runners moved up a base on the wild pitch and Litwin never stopped and sprinted for home. An alert Cruz hustled to the backstop, slid, picked up the ball, and threw off-balance to Nester at the plate to retire Litwin in a close play for out #2. Ryan Munger then flied out for the inning-ending out.

In the top of the 11th inning, the Tigers scored six runs thanks to only two hits, four walks, one hit-by-pitch, and a costly Blue Devil error. Lamb led off with a walk and Boyd hit a comebacker to Knott for a potential 1-6-3 double play. But Knott’s throw sailed into centerfield and Lamb moved to third on the error. After Miller walked on four pitches to load the bases with no outs, Nester also walked on four pitches to bring home Lamb. Johnson reached on a fielder’s choice as Boyd was retired at the plate 3-2 for out #1, then Epps was hit-by-pitch on a 3-2 count to score Miller. Freeman hit into a fielder’s choice as Nester was out of the plate 4-2 for out #2, but Schaus came through with a single through the right side to score Johnson and Epps. Hinson followed with a double up the middle to score Freeman and Schaus.

Schaus led Clemson by going 2-for-6 with a homer, four RBIs, and three runs, while Hinson went 3-for-7 with two doubles and three RBIs. Johnson added three hits and a double for Clemson, who had 12 hits. The Tigers overcame 16 runners left on base, including 12 left in scoring position.

Epps was also key to the Tiger victory, as he walked twice, was hit-by-pitch twice, and scored two runs. It was the seventh game in a row that Epps reached base at least three times.

Currier hit a grand slam to lead Duke, who had 10 hits in the contest and only stranded five runners on base.

Clemson and Duke will play the series-finale on Sunday at 1:00 PM.