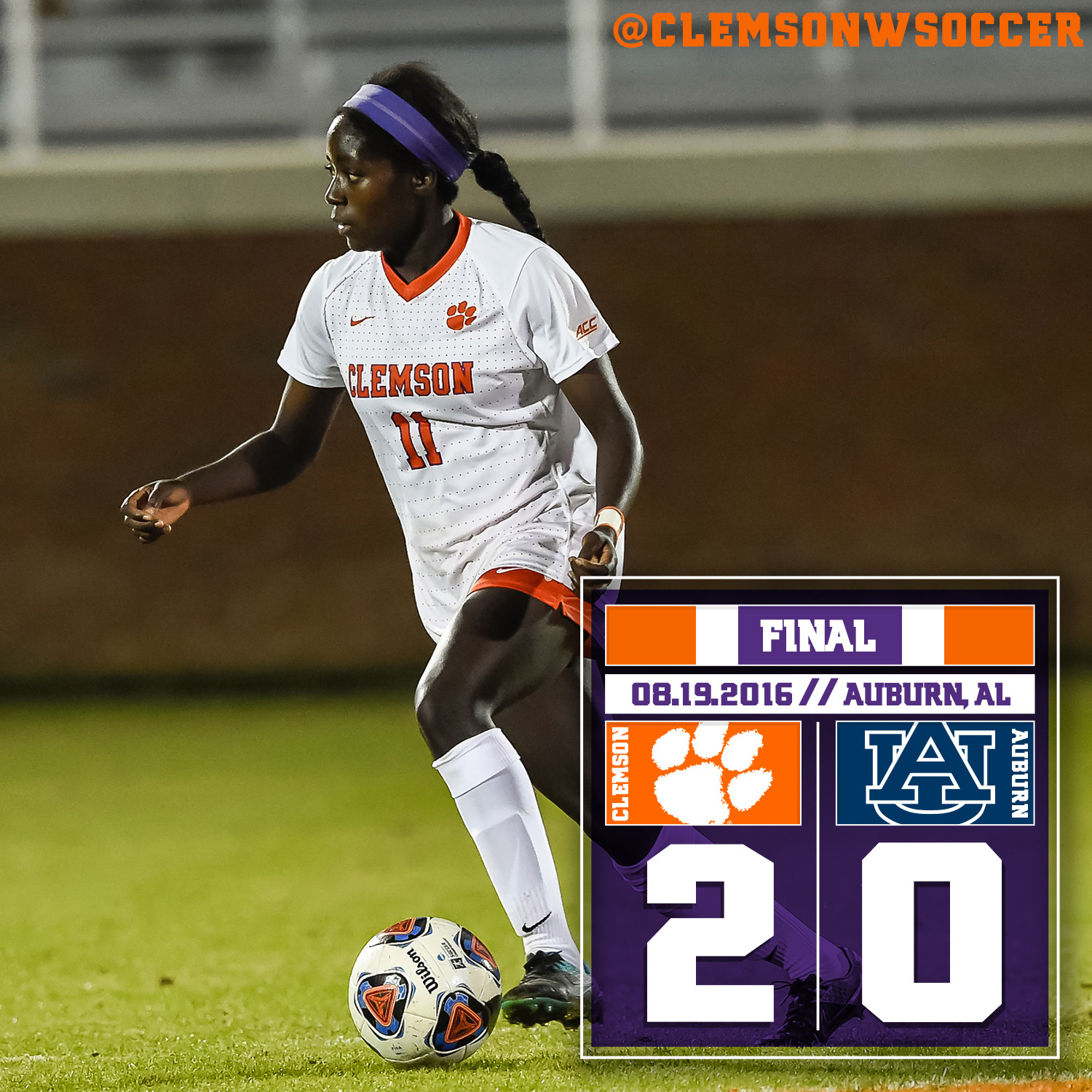 AUBURN, Ala. – Freshman Julie Mackin scored her first career goal just nine minutes into the match, and 10th ranked Clemson never looked back, defeating #12 Auburn by a final score of 2-0 on Friday night in Auburn, Ala. With the win, Clemson opens the season at 1-0, while Auburn starts out 0-2.

Mackin’s goal came in the ninth minute of play, and was the first collegiate goal for the native of Castle Rock, Colo. She was assisted by junior Shannon Horgan, who sent a cross into the box from the left side, which Mackin netted from six yards. With 23 minutes remaining in the half, the teams were called off the field due to lightning, for a delay which lasted approximately 30 minutes.

After first-half play resumed, there was no additional scoring in the half. Auburn had a very good chance with one minute left in the period, but freshman goalkeeper Sandy MacIver made a beautiful diving save, the first of her career.

Seven minutes in to the second half, senior Catrina Atanda netted a beautiful goal from 25 yards, to put the Tigers up 2-0. Senior Jenna Weston contributed an assist on the play. MacIver recorded another save in the second half, finishing the match with two, along with the clean sheet. Auburn created a few decent chances in the second half, but Clemson’s defense, anchored by senior Claire Wagner and sophomore Sam Staab, helped keep the SEC Tigers off the board.

Clemson hosts Georgia on Sunday, Aug. 21 for the Tigers home season opener. The match between the Tigers and Bulldogs is set for a 7 p.m. kickoff at Historic Riggs Field, and admission is free.

Head Coach Eddie Radwanski Quotes:“This was a great opening day win, on the road between two top-ranked teams. Karen’s team is always a tough and well-prepared opponent, and they presented a great challenge for us today. I thought we started out strong in the first half and Julie Mackin scored a wonderful goal, but then we took our foot off the gas a bit after the delay. Give Auburn credit for that, as they did put some good pressure on us.

“At halftime, we talked about getting back to our game, being more aggressive and assertive, and we did that. Our back line did a wonderful job in the second half. I was also very proud of Sandy MacIver. To be a freshman in her first start in goal in hostile territory; she got two very big saves and preserved the clean sheet.

“I’m also proud of all of the kids that came off the bench. I thought our bench players brought a lot of energy tonight.”